New character posters and a trailer have been released for filmmaker Jordan Peele’s next film, Nope, which is set for release on July 22.

Directed by Jordan Peele (Get Out, Us), Nope looks like it’s going to have something to do with extraterrestrials. The trailer introduces a family of horse trainers living on a ranch in the middle of nowhere. Everything is calm. A character dances in her living room to a vinyl record. There’s a beautiful, calm, serene night shot of a man standing by a horse. Then, the music sounds distorted as the record slows, as if coming to a stop. There’s a shot of a house in the distance underneath a dark, midnight blue sky as the music stops and all of the lights in the house go out. The man with the horse sees lights flash in the dark and the horse breaks off in a frantic run. There are various shots of the ranch, of other characters looking up towards the sky, and a woman getting sucked up into the sky.

Judging from the trailer, it’s definitely about an alien attack or invasion or perhaps an abduction. It looks like it’s going to be an action-packed movie that’s thought-provoking as well as disturbing. Peele normally visits the darkest recesses of the human mind, pulls out the most disturbing things about society, and forms them into a monstrous threat that we’re not sure the main characters will escape from. It looks as if Nope is going to follow this pattern. 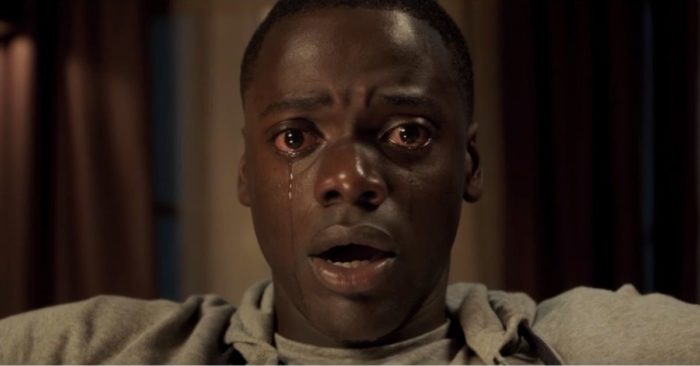 The posters each show a character looking up into the night sky with a look of fear, awe, or a mixture of both. Animated versions of the posters were shared on the film’s official Twitter account. The posters feature Oscar-winner Daniel Kaluuya, Keke Palmer, Oscar-nominee Steven Yeun, Brandon Perea, and Michael Wincott.

According to Screen Rant, Nope’s plot is largely under wraps. “The logline per Universal Pictures reveals that the film follows the “residents in a lonely gulch of inland California who bear witness to an uncanny and chilling discovery.”

In addition to directing, Peele also serves as producer alongside Ian Cooper for Peele’s own production company, Monkeypaw Productions. Peele is best known for his debut feature, Get Out, which earned him an Academy Award for Best Original Screenplay. Get Out also earned two Oscar nominations, one for Peele for Best Director and the other for Daniel Kaluuya for Best Actor. Before his notable work as a filmmaker in the horror genre, Peele was also a comedian, starring in Fox’s sketch comedy series Mad TV and Comedy Central’s sketch comedy series, Key and Peele. He also appeared in the first season of FX’s anthology series, Fargo, and co-created the TBS comedy series The Last O.G. Peele also served as host and producer of the CBS All Access revival of the anthology series, The Twilight Zone.