I went into The Righteous with sky-high expectations. I know that can be a dangerous game, as unrealistic expectations can ruin even excellent films, but I couldn’t help it. This movie has gotten some rave reviews ever since it debuted at last year’s Fantasia International Film Festival (including from Horror Obsessive’s own Alix Turner), so I was expecting greatness from it. And I’m happy to say that I was not disappointed.

The Righteous was written and directed by Mark O’Brien, and it stars O’Brien himself, Henry Czerny, and Mimi Kuzyk. It’s about a couple named Ethel and Frederic who is grieving the tragic death of their young daughter, and in the midst of their grief, a complete stranger named Aaron appears unexpectedly on their front lawn. He’s injured and lost, so the couple invites him inside their house, but it soon becomes clear that there’s more to this man than meets the eye.

I have to be honest, as much as I loved The Righteous, I was bored with it for the first half-hour or so. I just found Czerny’s and Kuzyk’s performances as Frederic and Ethel rather bland, so their characters simply didn’t resonate with me. I get that these people were grieving, so they probably didn’t feel like showing a lot of lively emotion, but that’s no excuse for them to be boring. I’ve seen much more intriguing portrayals of grief that have kept my interest from beginning to end (for example, last year’s The Night House), so for this part of the movie, I was actually pretty disappointed.

But then I came to a scene where Aaron and Frederic have a conversation late at night, and everything changed. Aaron came alive as a character, and he in turn breathed new life into Frederic and Ethel as well. All three of their performances were fantastic from this point on, so I was utterly captivated by everything they said and did. 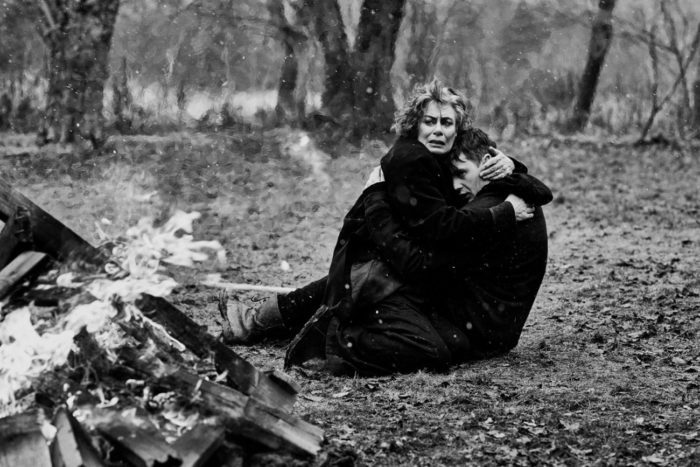 In particular, The Righteous has a number of monologues in it (each main character gets at least one), and in my opinion, these scenes are where the cast do their best work. Every time one of these actors gave a monologue, I hung on their every word, completely enthralled by both what they were saying and the way they were saying it. In fact, they were so good that they could’ve read out of a phone book, and I still would’ve happily sat there and listened to them.

On top of that, once Aaron comes alive as a character, he slowly builds up a sense of mystery about him, so I couldn’t help but want to learn more about him and find out why he was really there. It starts out pretty subtly, with little clues here and there that can easily be explained away, but soon enough, you come to a point where you know there’s something up with him.

He soon begins to reveal bits and pieces about himself and his real reason for showing up out of the blue, and as he does that, The Righteous just keeps getting better and better. A lot of films build up intriguing mysteries but then struggle when they have to let us in on their secrets, but not this one. The answers here are just as good as the questions, so every time Aaron pulled back the curtain a bit, I just became more and more hooked.

All of this leads up to an absolutely harrowing climax that features some of the most intense horror I’ve seen all year. I obviously don’t want to spoil anything, so I can’t say much about it, but I will say that it manages to reach these great heights with an absolute bare minimum of violence and gore. It’s not entirely bloodless, but it relies much more on suspense and paying off on the tension the characters built up throughout the rest of the movie, and the way I see it, that’s much more effective than any gore-soaked climax could ever be.

Taking a step back and looking at The Righteous as a whole, there are two more things I want to mention about it. First, we have the cinematography. The trailer for this film looked absolutely gorgeous, and the full movie does not disappoint in that regard. It’s beautifully shot from start to finish, so no matter what’s happening on screen, it’s always a joy to look at.

Secondly, we have the film’s message. This isn’t just a nice style-over-substance movie that looks pretty. No, it tells a story with real thematic substance to it as well, and I really appreciated that. At its core, this is a simple morality tale about the sins of our past, but there’s also a lot more to it than just that. It touches on redemption, faith, and God, too, and it weaves these various themes into the story in some really clever ways.

On top of all that, I want to mention one more flaw in The Righteous as well. Frederic and Ethel are deeply religious Catholics, but the movie doesn’t do a great job of depicting the Catholic faith. In particular, there are a few scenes where Frederic talks to his parish priest about his struggles, and the priest sounds about as authentically Catholic as Taco Bell is authentically Mexican. As excellent a job as Mark O’Brien did writing this film’s dialogue, when it came to the Catholic stuff, it felt like he skimped on his research and just made it up as he went along. As a Catholic myself, I found that a little irritating, and every time it happened, it took me out of the movie just the slightest bit.

But in the grand scheme of things, that’s a very, very minor complaint, and even when you combine it with the lackluster first half-hour, I still can’t recommend The Righteous enough. Like I said before, I went into it with sky-high expectations, and I was not disappointed. In fact, I was more than just not disappointed. Despite my expectations, I was still blown away by how good this movie is. It’s the best film I’ve seen all year, and I wouldn’t be the slightest bit surprised if it’s still at the top of my list come December. Granted, this film isn’t going to be for everyone, but if you like slow-burn artsy horror, I think you’re going to really love it.

The Righteous comes out on the Arrow Streaming Service on June 10, and it hits Blu-ray on July 19.