In Monstrous, Christina Ricci plays a chirpy ‘50s-era mother being terrorized by a lake monster that looks like Gabriel from Malignant. That logline would imply a good old-fashioned creature feature. Or, it could be a darkly atmospheric, nostalgia-infused fable. Heck, it could even be a classy, powerful psychological manifestation of repressed trauma. In a perfect world (or in more competent hands), it could be all of the above. Well, Monstrous is never as fun or as interesting as any of those directions would promise.

This is as much of a natural progression for director Chris Sivertson as one could predict, at least in terms of his two most notable features. There’s no forgetting the 2007 Lindsey Lohan-starrer, I Know Who Killed Me (which is either a total disaster or a misunderstood Giallo that took chances with a lot of mood, dream logic, and capital-S Symbolism) and then the likably bloody horror comedy All Cheerleaders Die, Sivertson’s co-directing effort with Lucky McKee. Piece together some of the wacky chance-talking of the former and the mere existence of a supernatural element of the latter and you get Monstrous. 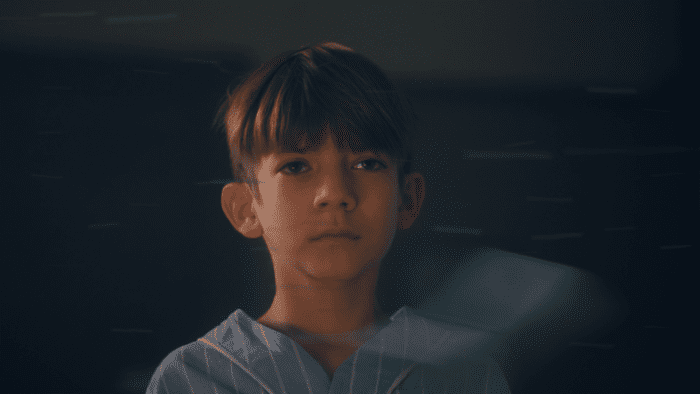 Ricci plays Laura Butler, a California mother with a cheery, can-do attitude (and a fake-it-till-you-make-it veneer) and a reason to flee her old life. Getting in their shiny, sky blue Chevy, she and her 7-year-old son Cody (Santino Bernard) are ready to start anew in a house they rent from an older couple of landlords (Don Durrell and an amusingly irascible Colleen Camp). Just as they settle in—Cody starts school and Laura already has a typist job lined up—there seems to be some sort of monster living in the lake by their new home. Is the monster Cody calls “the pretty lady” just a figment of his imagination, or is Laura starting to crack from the trauma of her ex-husband who may or may not be calling the house? Whatever’s going on here, it must be monstrous.

On paper, it would seem like Monstrous has the right ingredients to work as an effective bedtime story or a moving mother-son drama. Unfortunately, director Sivertson is either tamped down by budgetary restraints to create a tactile atmosphere, or the vision for telling this story just isn’t there. There are driblets of foreboding in the unknown coming for Laura and Cody whether it’s standing on the roof or outside a bedroom window in puddle form, but Sivertson too often flubs these creepily suggestive opportunities with ropey digital effects. It just doesn’t help that the lake monster in question is so poorly realized when we get up close and personal; Gabriel resemblance aside, the creature holds little threat, so how can we be scared for this mother and her son? If the film is too tame to be frightening or even sufficiently tense, it’s not terribly poignant as a drama, either, when it hinges on a delayed twist ending.

Oh, and Monstrous is a period piece, too. It’s set in 1955, and we can tell by Laura’s car, her wardrobe, and her sunny Stepfordized disposition. The uses of Buddy Holly’s “Everyday” and The Chordettes’ “Mr. Sandman” on the soundtrack also help. Otherwise, other period details are not terribly convincing when they look more like actors playing dress-up. (Yes, I’m a 1987 baby, but I’ve seen numerous movies set in the ’50s with more texture in the production design to transport us back in time.) Part of that proves to be intentional, sure, but cheating before the third act doesn’t work as some “get out of jail free card.” 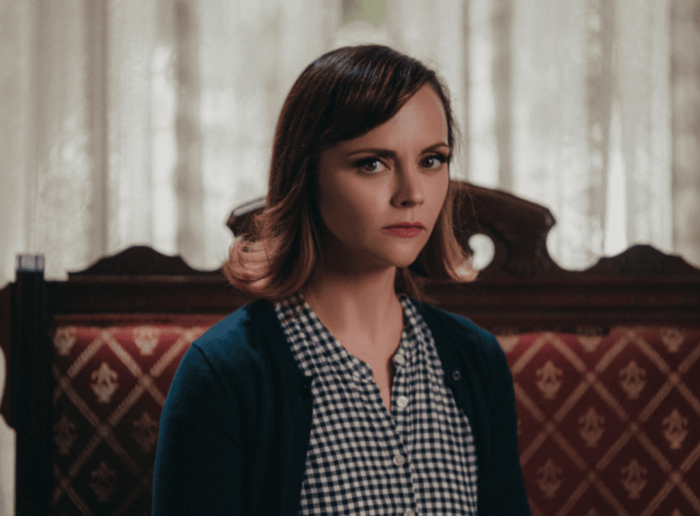 Carol Chrest’s screenplay keeps the truth very close to the vest—Laura refers to their past as “what Dad did to us”—but it tends to be dramatically flat aside from the occasional hallucination or outburst from Laura to make the viewer question her mental and emotional stability. Ricci is certainly giving this material her all (perhaps more than it rightfully deserves), and yet, there isn’t much to Laura as a character. She cooks and cleans, and eventually, we realize she’s full of anxiety, sneaking cigarettes and vodka miniatures from a shoebox. Once she drinks on the job, Laura isn’t much more than an “unreliable narrator” of sorts. Again, Ricci cannot be faulted for selling the panic and emotional distress as well as anyone could, but it’s not really enough when the direction is perfunctory and the script could have used another pass.

What Monstrous ultimately wants to do is pretty clear, but the presentation of it comes across more as overly arch, hollow, and ham-fisted. In the final 10 minutes, the film has one of those rug-pulling reveals that reframes everything you have just seen (last week’s Shudder release The Twin did pretty much the same thing). Here, it feels more ill-advised than fully earned. Like a tackier The Babadook, the film cheapens feelings of loss and undermines its central character’s guilt rather than exploring the subject matter in any meaningful way from the start. As nothing is like what it seemed and the previous 79 minutes are just negated, Monstrous results in one big fake-out with no actual chills, no psychological insight, and no satisfying catharsis. Since the main takeaway is Christina Ricci, one is better off checking out her fascinatingly demented yet vulnerable work as Misty Quigley in the first season of Showtime’s ensemble series Yellowjackets.

Screen Media is releasing Monstrous in theaters and on-demand on May 13th, 2022.