In a recent interview on the radio program, “Wired in the Empire” with RadioactiveMike Z on 96.7 KCAL, Glenn Danzig revealed that he has four films currently in the works. He’s working on scripts for sequels to his 2019 movie Verotika and 2021’s Death Rider in the House of Vampires, plus a werewolf film and a martial arts film.

Verotika is an anthology horror film presenting stories from adult comics published by Danzig’s company, Verotik. Written and directed by Danzig, Vulture reported in 2019 that Mario Bava’s Black Sabbath inspired Verotika. The film stars Rachel Alig, Alice Haig, Natalia Borowsky, Sean Kanan, Scotch Hopkins, Ashley Wisdom, and Kayden Kross and tells three tales: “The Albino Spider of Dajette,” “Change of Face,” and “Drukija Contessa of Blood.” No information was given in regard to the content of the sequels.

Written and directed by Danzig, Death Rider combines vampires with spaghetti westerns and stars Devon Sawa as the titular character, Julian Sands as Count Holliday, and Kim Director as Carmilla Joe, with Eli Roth as Drac Cassidy, Danny Trejo as Bela Latigo, and Danzig playing a role himself as Bad Bathory. Death Riders’ sequel is called The Vampire’s Vengeance.  

Danzig was asked if he planned to have a role in any of his other films. Blabbermouth quotes Danzig: “The only one I did a little role in was the ‘Death Rider’ role, the Bad Bathory role, which is a smaller role, ’cause I just like to concentrate on directing. Yeah, I don’t know. Probably, obviously, in the ‘Death Rider’ movie, Bad Bathory comes back. But I don’t think in the other ones I’ll be making appearances.”

He added that Kim Director will return for the Death Rider sequel. Director is known for her roles in Blair Witch II and The Deuce. As far as the rest of the cast, he said:  “The others may or may not come back. If we do the sequel, you’ll have to see it to see who doesn’t come back and who comes back.”

Blabbermouth reports that Danzig told Rolling Stone that he got the idea to make a vampire spaghetti western because he had never seen it done before. On writing the Bad Bathory character, Danzig said: “I started writing the script, and I had all these characters. And then eventually I was, like, ‘You know what? I could do this, and we won’t have to look for somebody and we get out of it cheap.’ So I didn’t originally intend for me to be that character, but then I just started thinking about him, like, ‘I’ll just do this one. It’s not a big part. It’d be easy. I could still do the directing.’ 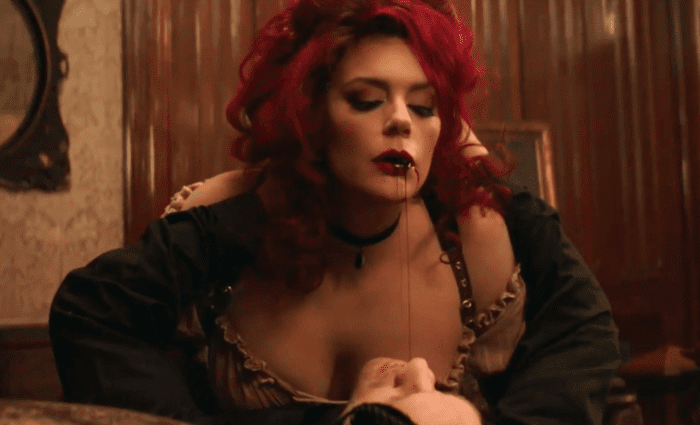 “With directing, at least for me, you’re involved in everything. People come to you with wardrobe, sets, casting; pre-production is insane. The director’s got the hardest job. I just want to make sure I’m, like, a real director and not like one of these Hollywood directors where somebody else will start the movie and then they take credit. [Laughs].”

As for his other projects, Danzig said: “I’m writing a werewolf biker movie—like one-percenter werewolf bikers, outlaw bikers. Then I’ve got a martial arts movie I’ve been working on for a while with the knife-fighting assassin.”

Loudwire reports that Danzig told Full Metal Jackie the following back in 2019, about his decision to start making movies: “I think I’m gonna do three movies and then decide if I want to keep doing it. I’m gonna do three. I’m already getting ready to do my next one which is a vampire spaghetti western. Everybody’s vampires in it. So after that, I’ll see what I wanna do. Then I’m gonna sit and decide if I wanna keep doing it or not.”

Danzig told Revolver that he’s interested in making horror movies because he “[…]saw the correlation between society and the monster and why there was a need for a monster.”

Glenn DanzigVerotikaDeath Rider in the House of Vampires