Kicking off Horror Obsessive’s coverage of the 2022 St. Louis Panic Fest, we have our first two presentations, American found-footage horror The Outwaters and German retro ’70s psychological horror satire Dawn Breaks Behind the Eyes. The two movies would seem at first glance to have absolutely nothing in common, but I still found some eerie echoes between the two. Both films feature an identical pattern of seashells, one a necklace and the other in a minor character’s cornrows, and in a more arresting similarity, both movies contain a scene of graphic dismemberment. Yes, by weird coincidence, whether you like your peen slowly hacked off with a shark tooth or wrenched off by hand, there’s something for every castration enthusiast in today’s offerings.

Dawn Breaks Through the Eyes

Austrio-Sri-Lankan director Kevin Kopacka’s latest, Dawn Breaks Through the Eyes is a twisty, surreal, and tongue-in-cheek piece of retro gothic that should please genre fans with its period recreation of ’70s independent filmmaking and labyrinthine narrative construction. It’s a hard film to approach in a review as there’s an abrupt shake-up to the film about half an hour in, with the film wrong-footing the viewer entirely. Discussing the film that Dawn Breaks Through the Eyes truly is would shatter the surprise of this revelation, but it would be a shallow review that doesn’t discuss anything behind that curtain. Even to compare it to comparable films would give the game away to anyone familiar with those works. If you’re familiar with any of the films I’m thinking of, then you’ll think of them too.

The film begins with a childless married couple, Margot (Luisa Taraz) and Dieter (Frederick von Luttichau), arriving at a country house as night falls. Margot has just inherited her ancestral home. While the uptight, bullying Dieter is in a hurry to get it straightened out and sold off, she’s not so eager to part with it, harboring a nostalgic, sensual yearning for its dusty rooms and all they represent. Both characters are a bundle of pent-up urges and frustrations. That’s about as far as I can go without giving the game away, but the film soon introduces a second couple—Eva (Anna Platen) and Gregor (Jeff Wilbusch)—that eerily mirrors the first but comes to the house under very different circumstances. 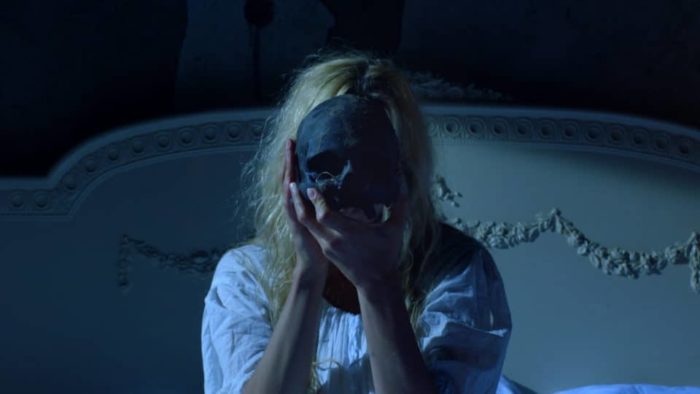 Though it’s restricted to a single location, the film is a minor triumph of production design, slipping back and forth in time and capturing a mood that’s alternately sad, scary, and funny, depending upon which point of view character we’re following at any given moment. The cinematography also manages to capture both the thick, stale atmosphere of decay and death and warmth and oppressive conviviality. Like Ti West with The House of the Devil, Anna Biller with The Love Witch, or Peter Strickland with the similarly wry, sadomasochistic The Duke of Burgundy, director Kevin Kopacka clearly understands the fetishistic aesthetics of ’70s horror and refreshes them well, giving them a gleefully postmodern spin. Moments echo Hellraiser or Society, but the film has a modern edge and perspective that keeps it out of the realm of hollow pastiche, exploring the uncanny immortalising effects of Camera Lucida.

Thematically, its closest relative is probably mother! a film purportedly about climate change but far more preoccupied with the parasitic artist-muse relationship and how it mirrors an abusive relationship. The central couple is a woman constantly belittled and diminished, her opinions shut down or ignored by a selfish, narcissistic man interested only in satisfying his own desires and feeding his own ego. Their inabilities to break out of this toxic relationship leave them in a kind of purgatory, destined to relive the same events indefinitely until they’re able to avoid the same mistakes.

Unlike mother! though, Dawn Breaks Through the Eyes is a lot of fun as well, with its tongue firmly in its cheek, an appealing aesthetic style that matches its surrealist, dreamlike narrative, and a wealth of genre literacy for fans to paw over. Plus, at only 75 minutes, it doesn’t run the risk of outstaying its welcome, something I wish I could say about the next film on today’s bill.

It is possible to convince me that in 2022 you have a “people went off alone and went missing, here’s the footage they shot” movie that was worth making. Beyond the genre’s biggest milestones, the found footage horror subgenre has chucked up some absolute gems in recent years like As Above So Below or The Borderlands (a.k.a Final Prayer) which is one of my favourite horror movies of all time. But, it’s a familiar setup and you do have to go the extra mile to make me care. With any fake documentary, there’s the inevitable wall to surmount: yes, you’re freed of having to hide the fact this is all being filmed and so can do it on the cheap, but you now need to make the film consistent with its realistic found-footage concept and ensure there’s a narratively justified motivation for keeping the cameras rolling at all times and filming the things that are taking place. It’s a tough hill to climb and The Outwaters comprehensively fails to scale it. 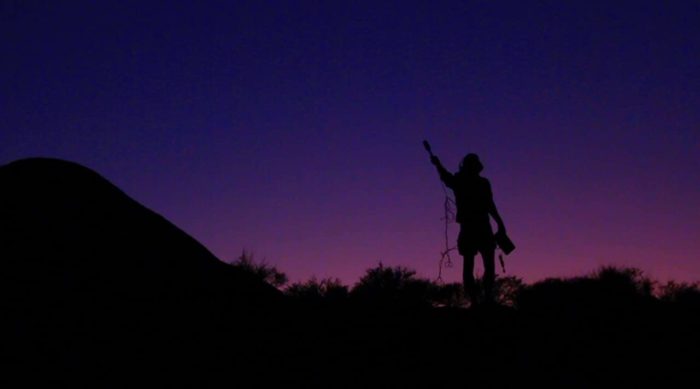 The film opens in typical fashion with title cards informing us that these four people disappeared on 8/8/17 (my birthday!), that three camera memory cards were discovered years later, and that these are what we’re watching. One hour and fifty minutes is pretty long for a found footage movie and it soon becomes clear why not only is this movie is so long but why most others keep it trim, as we’re then subjected to almost an hour of what amounts to four strangers’ vacation video. The writing is sadly inadept at characterisation, taking over 20 minutes just to give the barest establishment of the lead characters, all of whom are very one-dimensional archetypes anyway.

We begin with two brothers, Scott (Scott Schamell) and Robbie (Robbie Banfitch, the film’s director) who serves as our camera operator, and are shortly introduced to their sister Ange (Angelas Basolis) and friend Michelle (Michelle May). Michelle is a new age folk singer and the four are driving out to the Mojave to shoot a music video for her new album. There’s some baggage we’re told about. The siblings’ father is dead, as is Michelle’s mother, but by the time the quartet finally gets on the road, no conflict has been established.

At least once we get moving we get some arresting scenery to look at, although the overbearing sound design does little to invest it with a sinister quality. There’s a high-pitched shriek that you will get very sick of hearing, believe me. The first half of this movie could teach Lav Diaz a thing or two about slow cinema, with it being 40 minutes in before anything even the remotest bit disquieting happens and about halfway through when the film really goes wild. It would be overgenerous to say it starts paying off though, as the first hour is just utter tedium and does next to nothing to build affinity with the characters. It’s extremely poor and would’ve been sufficient to damn the film whatever it chose to do next.

What it chooses to do next though is something unexpected, and I wouldn’t be at all surprised if some tried to defend the first half as intentionally so boring and generic as a means to lull the audience into a torpor it can jolt them out of. Visually and aurally, the second half of The Outwaters is one of the most intense cinematic fever dreams I’ve ever endured, even if we can’t see a thing with the camera operator stumbling around in the dark, the torchlight occasionally alighting on some blood spray, the sparse lighting allowing the filmmakers to construct scenes entirely out of cacophonies and meat. I can only imagine 90% of this film’s budget went into fake blood. 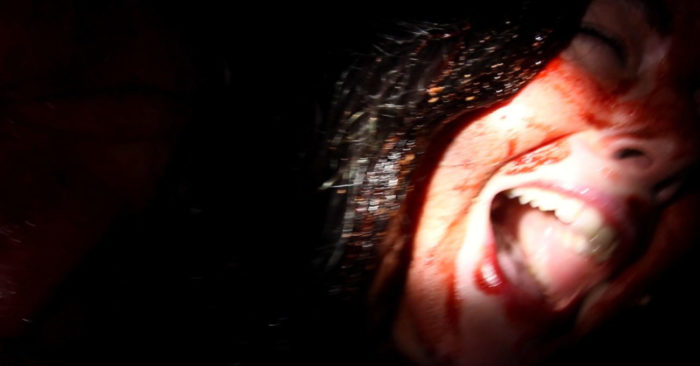 This second half is as conceptually ambitious as it is incoherent and repetitive, flip-flopping between different kinds of horror with hardly any semblance of story or theme, which it might have had if only the film’s first half had been spent more wisely. Yes, it’s striking and horrific, with some moments that could’ve been unforgettable under different circumstances, but it’s also hollow and meaningless, overbearing the viewer with one shock scene after another. I’ll admit though, the ending is pretty funny, I might’ve been more generous had the film stuck to this tone and the first half not abused my attention and wasted my time so much. And I’m sorry, “Wayfaring Stranger” belongs to Titane now, you can’t just throw it in here after Julia Ducournau integrated its themes and imagery so seamlessly into her narrative.