When you think about the id, the unchecked desires, and backward logic that’s only concerned with pleasure and gratification in the human psyche, do you think of the most extreme and ugly examples in a generalized way? Or do you think of your own personal examples of the id in the driver’s seat? One thing is for sure: we all let our id take that wheel sometimes. We’re human, after all.

On a personal level (if you dare to look that closely at the lecher in the corner), it’s also fair to say that we all have our moments of stupendous debauchery and shameful behavior; God knows I do. Freud told us that the id is that infantile part of the psyche that never grows up and just wants to do what it wants to do right now. Babies are all id because it’s literally all they know. I know in my most shameful moments, I most definitely had a lot in common with a baby. The truth hurts, y’all.

It’s been over fifty years since the release of Wake in Fright (alternate title: Outback), but you wouldn’t know it based on the raw and brutal truth presented—it’s not an easy film to watch at times. You’ll hear it time and again concerning this film, but I’ll say it as well—there is seriously up close and personal man-on-kangaroo violence that’ll test your comfort level. It won’t be the only thing testing your comfort level, though; virtually the entirety of the film is equal parts pushy, macho, violent, sexually aggressive, and cruel. In “the Yabba” even the hospitality is low-key hostile!

It needs to be. In fact, it’s essential to this story. Sometimes a film simply won’t work without the discomfort for the audience.

Have a drink, mate? Have a fight, mate? Have some dust and sweat, mate? There’s nothing else out here.

Wake in Fright presents The Yabba as a real place, an outback mining town full of hard-working, hard-drinking, hard-gambling men who down their beer at a single chug and enjoy a good back-room game of two-up. John Grant is a decent (if unremarkable) teacher working out a government bond at a one-room schoolhouse in the nowhere train stop of Tiboonda. He’s on Christmas holiday to see his girlfriend in Sydney, and his first stop for the night is Bundanyabba. He’ll find the time of his life along with a regret so huge it’s an almost physical presence.

The handful of women you see around The Yabba, like Tim Hynes’ wife Janette, are either broken and lifeless shells or they’re trying like hell to get laid. The male to female ratio in Bundanyabba is severely off-balance. It’s a recipe for ugly that doesn’t end well. There is a menace in the air even in the friendliest of moments (back to that pushy hospitality again). And yet…

There is an honor system in The Yabba that adheres to the “every man is your brother” mantra. Someone will always buy you another beer to inhale (at patently ludicrous speed) even if you are skint. All the side bets and payouts work on an honor system, a polite exchange without a whiff of ugliness amongst a pulsing crowd fighting for a spot in the game. The people you party with are more than happy to let you crash at their shack in the middle of nowhere. They’ll give you a really cool gun to go out and spotlight kangaroos in the wee hours of the morning with. They’ll pour alcohol down your throat for you when you’re too trashed to do it yourself.

Now I know that sounds familiar to quite a few of you.

“What’s the matter with him? He’d rather talk to a woman than drink?!”

John Grant is torn between his id and his better nature. He’s felt more alive, sure, but now he’s trapped in this backwater burg where everyone is at best a harmless but hopeless drunk and at worst a psychopath. He lost all his money gambling. With his fiancé seemingly a distant memory, Grant ends up going deep down the rabbit hole of degeneration and self-gratification before finally ending up back at Doc Tydon’s squatter shack with his gifted gun to his head, ready to end it all. It seems Constable Crawford’s foreshadowing at the beginning of the film wasn’t just idle chit-chat.

John Grant’s rock bottom scenario and ensuing second chance set up what Wake in Fright is ultimately saying about letting your id do too much of the driving: there are no happy endings when you live your life by the pleasure principle. It’s simply unsustainable.

Wake in Fright is a master class in showing the dangers of excessive, indulgent living and giving them a physical form with a pulse and a beating heart. The Yabba ultimately feels like a town from an old Twilight Zone episode given terrifying familiarity thanks to that hard edge of reality that’s born of our own experiences of fighting with our base nature…even if we try to disavow all knowledge of those experiences.

When you combine the social and moral core of the film with an unbelievable back and forth dance between Gary Bond as John Grant and Donald Pleasance as the enigmatic Doc Tydon, the end result is a film that blends horror, thriller, and Ozploitation for an experience that doesn’t flinch and leaves you in a different state than when you went in.

I’ll drink to that.

A man obsessed with all things horror (particulary the Italians and the British), Big Daddy Stu devours everything he can in the genre. When he's not watching or reading horror, he's watching pro wrestling or Clemson Tigers football. Big Daddy Stu also writes a bit of fiction on occasion. 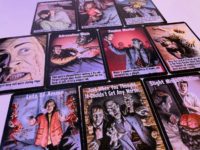