I know what some of you are probably thinking. How can one of the most brutal slashers to hit theaters in years, a movie that our own review called “a freight train of murder,” have an anti-violence message? Isn’t the whole point of films like Halloween Kills to glorify violence for our own twisted entertainment?

I don’t think it is. Sure, a lot of horror movies embrace that philosophy, and you can definitely view Halloween Kills that way, but horror doesn’t have to be all about blood, guts, and violence. When it’s at its best, it uses those elements to teach us about the true nature of evil, and despite the bad rap they often get, slashers can do that just as well as any other subgenre.

Halloween Kills is a great example of this. It subverts our expectations of slasher films and uses its brutal violence to convey an important message about evil in the real world and how we should respond to it. It’s a message that’s both timeless and very relevant for our day and age, so let’s take a deep dive into this film and see just what it has to say.

Unlike the victims in most slasher films, the ones in Halloween Kills don’t just sit around waiting to get murdered. Instead, they fight back and try to end Michael’s reign of terror, and the driving force behind this campaign is Tommy Doyle. He was the boy Laurie Strode babysat in the original Halloween, and in this movie, he’s all grown up.

When he hears that Michael Myers has escaped and is back in Haddonfield, he organizes a vigilante mob to track the killer down and finish him once and for all. He eventually gets all of the main characters involved, and the group adopts the phrase “evil dies tonight” as their motto.

I have to admit, about halfway through my first viewing of Halloween Kills, I was ready to join these guys and hunt Michael down myself. In fact, if I wasn’t in a theater with other people, I might’ve raised my fist and yelled “evil dies tonight,” too. Michael Myers is an evil, despicable serial killer, so I totally agreed with them that he needed to be stopped.

And I think that’s the point. I think the movie wants you to get on board with them. It wants you to sympathize with Tommy and support the mob’s effort to rid Haddonfield of its boogeyman, and once you buy in, the film pulls the rug right out from under you. Later on in Halloween Kills, when Tommy brings his friend Lindsey to the hospital, he tries to recruit even more people to his cause, and that’s when things start to go sour for these would-be heroes.

A man who escaped the mental institution with Michael finds his way there at the same time, and he tries to ask for help. But sadly, nobody hears his plea, and his presence at the hospital just causes a stir. Tommy asks if the person is Michael Myers, and as vigilante mobs often do, they take the suggestion and run with it. They immediately convince themselves that he really is Michael, and they begin to chase the man around the hospital as they chant “evil dies tonight.”

Soon enough, the poor guy can’t take it anymore, so he jumps out a window and falls to his death. A crowd assembles around him, and when former sheriff Leigh Brackett sees the man, he becomes very distraught. He says it wasn’t Michael, and then he solemnly proclaims, “Now he’s turning us into monsters.”

This moment is the thematic turning point of Halloween Kills. Like I said before, I was completely on board with Tommy and his mob before this scene, but when I saw what they did to this innocent man, I realized I had been duped. Yes, Michael needs to be stopped, so their cause is solid, but they’re going about it the wrong way.

They got themselves so worked up that they adopted a “shoot first, ask questions later” mentality, and it resulted in the death of a man who was just asking for help. They became so hell-bent on stopping a murderer that they let their rage turn them into the very thing they were fighting against.

Admittedly, none of this means Halloween Kills is truly anti-violence. It’s very possible that Tommy and his gang just need to tone down their emotions a little and think things through a bit more. At this point in the story, all we know is that they’ve made a mistake, but we’re not sure what the movie is going to make of it. To find that out, we have to keep watching.

“The Essence of Evil”

At the end of Halloween Kills, the vigilantes finally catch up to Michael, and they get their chance to put him down once and for all. They beat him to within an inch of his life, and then Laurie’s daughter Karen delivers what should be the killing blow. She stabs him in the back, near the base of his neck, and then she walks away.

At this point, the film begins to switch back and forth between this scene and the hospital, where Laurie is talking to Deputy Frank Hawkins about Michael Myers, and we learn a bit more about the killer’s true nature. Laurie explains that he’s not “a mortal man,” so he can’t be defeated with “brute force.”

Then, right after she says that, we go back to the group standing around Michael’s apparently dead body, and we see that Laurie was right. Despite everything they just did to him, Michael somehow manages to get right back up and kill the entire mob, ending with Tommy Doyle himself. As this is happening, we hear Laurie continuing her monologue, and she explains that Michael is “the essence of evil, the anger that divides us,” and “the terror that grows stronger when we try to hide.”

And with that, Halloween Kills lets us know exactly what it’s trying to say. No matter what the mob did to Michael, they weren’t going to kill him because they were simply using “brute force.” As Laurie said, he can’t be killed that way. We don’t know how he can be killed, but we know their approach won’t work.

Admittedly, when we hear Laurie explain who Michael really is, it’s easy to think that the movie is simply being idealistic. Sure, it sounds nice to say that we can’t fight violence with violence, but sometimes that’s our only option. For example, if someone is actively trying to kill you or the people you love, you may have to use force to stop them, and realistically, I’m not sure how else they’d be able to stop Michael Myers. I obviously don’t know what’s going to happen in Halloween Ends, but I’m pretty sure Laurie isn’t going to use the power of love to convince him to leave his murderous ways behind. 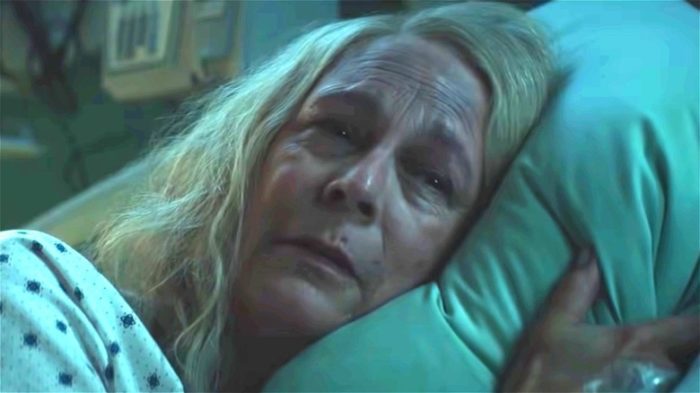 So how can we make thematic sense of this climactic scene in Halloween Kills? The key, I would suggest, is that Michael isn’t “a mortal man.” Instead, he represents “the essence of evil,” so he’s a metaphor for something much bigger than a single person.

He symbolizes evil itself, and once you view him that way, everything falls into place. Sure, you may have to use “brute force” to fend off a “mortal man,” but to fight evil on a larger scale, you have to take a very different approach. For example, to fight the pervasive and systemic evils that saturate our society, such as racism, the objectification of women, and the narrow-minded partisanship that makes people focus more on defeating “the other side” than actually helping those in need, we have to follow a different path.

Violence isn’t going to root out the evil in human hearts. To fight that kind of evil, we need to take the approach of people like Martin Luther King and Gandhi, an approach that conquers evil with good. If we don’t, we’ll inevitably turn into the very thing we’re opposing. We’ll hurt innocent people just like the mob at the hospital did in Halloween Kills, and that simply feeds into the evil we’re trying to defeat.

Admittedly, I don’t know how (or even if) this is going to play into Halloween Ends. For all I know, that film might completely ignore this idea and give the trilogy as a whole an entirely different meaning. But if we just take Halloween Kills on its own terms, it has a strong anti-violence message that’s sorely needed in these volatile times. It seems like just about everyone today wants to use violence to make their voices heard, so it’s imperative that we always remember the important lesson this movie contains.