Lamb, The Other Lamb, The VVitch, I don’t know what it is about sheep that attracts horror filmmakers of late. Perhaps it’s the old Jewish practice of the scapegoat or the ram-headed pagan gods of old, maybe it’s just the rural isolation shepherding invokes. Whatever compelled writer-director Russell Owen to add to this tradition, he seems less inspired by religious lore and folk myth and more by the seminal video game Silent Hill 2. That might sound like a reach, but it feels the most apt comparison, with their common themes of guilt and grief and their shared iconographic use of space, fog, and large bodies of water.

Like many a horror, Shepherd begins by introducing us to a character on their precipice. Eric Black (Tom Hughes) could get horror protagonist bingo. A not too distant cousin to James Sunderland, we meet him at his wife’s graveside. He’s from a religious background but is lapsed himself, a wedge between him and his devout mother (Greta Scacchi). He’s wrestling with suicidal thoughts. His wife died pregnant with a child he has reason to believe wasn’t his. His grief mingling with guilt, jealousy, and anger, he’s left with two options: open his veins with a rusty folding knife or take a job as a shepherd on a remote foggy island.

The opening titles roll over a sequence of aerial shots of Eric’s lonely drive to his post through an endless expanse of forbidding highland hills, an unmistakable invocation of Stanley Kubrick’s The Shining. Eric’s Overlook Hotel is a windswept and dilapidated off-grid shack in the shadow of forbidding hills and a perpetually tolling lighthouse bell. His Charon to this purgatory is Fisher, a milky-eyed fisherwoman phenomenally dressed by costumier Gigi Siegel in near-rags and played with spellbinding eerie magnetism by that great Scottish thespian Kate Dickie. She’s a whole aesthetic, dropping him and his loyal collie Baxter (Shuggie) off on his frontier with a leather-bound journal and a few less than reassuring words, as grim and credible a soul reaper as you’ll find on film.

Once left alone on the island, the isolation and mental disquiet soon begin to take hold on Eric, his personal demons are given infinite space to fill, and his hallucinations begin to overtake his every waking moment, finding himself stalked by that old horror staple; a female figure in black.

The setting is everything in Shepherd and the landscape and location do wonders for the atmosphere. The exteriors were shot on the Isle of Mull (with additional photography in Northern Wales) and it’s a haunting, desolate, and beautiful landscape, compelling enough to carry the film on its own. Alternately set off by thick sea mists or enraged flashes of lightning. The interiors—created at BBC Dumbarton by production designer Chris Richmond, art director Martin Kelly and set decorator Dominic Smithers—though are a marvel, all rust, dust, mold, and cobwebs, the detritus of decades of disuse, with the ambient sounds of creaking boards and hinges giving it a tactile, bitter sense of place. Oftentimes the scoring and sound effects associated with Eric’s mounting madness and unease are excessive, but the more diegetic sounds are fantastic, rooting you in the locale, with a perfect touch of hyper-reality to lend a sense of the surreal. The film could well have been a lot creepier had it relied on this ambiance more. 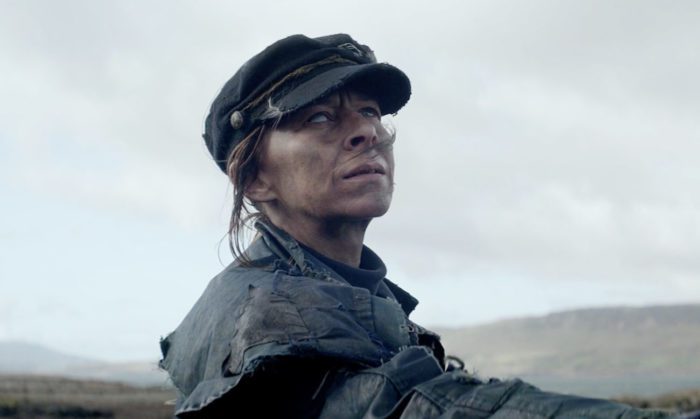 The film is a slow burn but cinematographer Richard Stoddard demonstrates such a compelling eye for dynamic blocking and framing that the picture remains consistently absorbing, making the most out of the forbidding locations and chilly sets. Owen has a good grasp of horrifying imagery and rarer, has the resources to bring them to life onscreen. The effects are surprisingly effective and in one arresting key sequence, were sufficiently convincing to have me staying to the end to check the “no animals were harmed during the production of this film” was definitely there. There’s the occasional use of VFX that leaves something to be desired, but most of the effects shots hold up unexpectedly well.

Besides the often overbearing score, perhaps the weak link here is Hughes, whose lead performance never quite sets the screen alight the way his co-stars do. I’d have cast an older actor in the role personally, but Hughes doesn’t bring the part to life the way a more road-tested performer might have. For such a psychological, character-driven brand of horror, a really rigorous character study from the lead actor was needed and I’m sorry to say I don’t think Hughes really pulled his weight. Dickie is as phenomenal as ever, I missed her whenever she wasn’t onscreen, and Greta Scacchi adds terrific support as Eric’s estranged and bitter mother, managing to make her very difficult company, while still investing the role with a deep sense of loss, longing for companionship but unable to deal with the rage inside her that drives people away.

The reception of Shepherd seems to have been rather frosty, ranging from mixed to negative, but it has found some fans among more hardcore horror devotees. It isn’t an intensely plot-focused affair, if you’re looking for a clear answer as to who the fisherwoman is, what her motivations are, and what’s really going on as far as coherent supernatural world-building goes, then you’re looking in all the wrong places. Shepherd is a straightforward exercise in disturbing imagery, many of its bigger scare scenes are acknowledged in-universe as Eric’s nightmares, so that’s the kind of psychological logic the film follows, with its set pieces unpacking its protagonists’ fears, regrets and mistakes, playing out a psychodrama of what haunts him.

In this respect, the ending isn’t the strongest, feeling like a bit of a forced twist that comes out of nowhere and doesn’t seem to respect the psychological groundwork the film has been building up. Still, the film delivers enough compelling moments along the way that I struggle to see where so much of the negative criticism the film has received comes from. Shepherd may not be a great film but there are great moments in it. It may all feel like a familiar, predictable territory to genre fans and might ultimately be too disjointed for more casual viewers, but there’s enough to commend it as an airing of psychological horror’s most fundamental tropes.