I’m a huge fan of werewolves. I love everything from The Wolf Man to Ginger Snaps to lesser-known films like Howl and Bad Moon, so when I first saw the trailer for The Cursed, I was immediately hooked. It looked like a cool new take on the werewolf mythology we all know and love and I knew I had to put it on my to-watch list.

Written and directed by Sean Ellis, The Cursed stars Boyd Holbrook, Kelly Reilly, Alistair Petrie, Roxane Duran, and Áine Rose Daly. It’s set in the late 1800s, and it’s about a small village that’s being ravaged by what its residents think is a wild animal. But when a pathologist arrives to investigate the situation, he finds that it’s much more dire than they could’ve ever imagined.

I went into The Cursed with some pretty high hopes, and while it’s not the best movie I’ve seen this year, I’m happy to say that I was definitely not disappointed. In particular, there are three things that really stood out to me about it.

First, let’s talk about the period setting. While I obviously can’t say how accurately the movie recreates its historical setting, to this non-history buff it definitely feels like it was lifted straight out of the 1800s. The way the characters act, talk, and dress looks and sounds completely authentic, and that lends the film an air of verisimilitude that you don’t always get in period pieces.

Some movies feel like they’re just recreations of the past with modern people pretending to be old-timey, but not this one. I felt like I was really being transported back to the 19th century, and if I didn’t know any better, I might’ve even thought this film was actually made back then. It allowed me to completely buy into the historical setting, and that went a long way towards selling me on the movie as a whole. 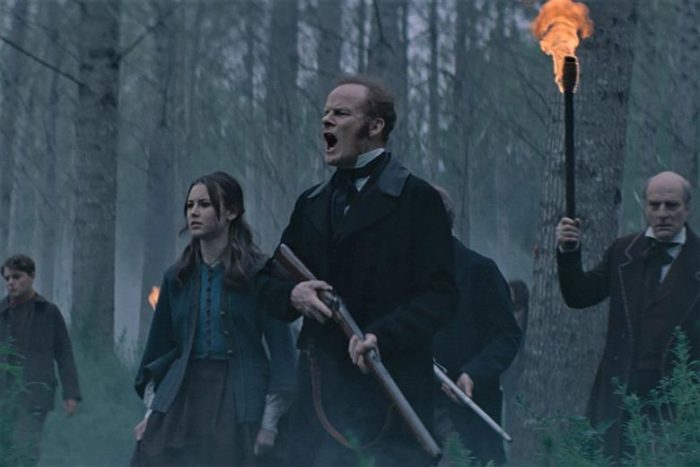 Secondly, we have the atmosphere. The Cursed doesn’t have a ton of scares, so if you’re looking for a nonstop thrill ride that’s going to keep you on the edge of your seat the entire time, this is not the film for you. Instead, it’s much more about the atmosphere and the feeling of dread that permeates the entire story, and it’s pretty effective.

This is a terrifying situation for the characters and the movie conveys that terror pretty well even when nothing particularly frightening is happening on screen. It makes you feel the villagers’ fear that they might fall prey to this mysterious beast at any moment, so even though the film isn’t packed with scares, just about every frame is filled with genuine horror.

That being said, I do have to mention that there are a few scenes where the atmosphere feels a bit forced. In my opinion, atmosphere works best when it brings out the inherent creepiness of a situation, and there are a handful of times when The Cursed manufactures a sense of dread that just isn’t there. I felt like the filmmakers were trying too hard so it took me out of the film a little bit. Thankfully though, these moments are confined almost exclusively to the first act, so once the story really gets going, it stops being a problem.

Last but not least, let’s talk about the werewolves themselves. The movie takes a very Jaws-like approach, showing you the creatures very sparingly for most of its runtime, and in my opinion, it works wonderfully. It gives these monsters a sense of awe and mystery because even though you know they’re werewolves, you’re not entirely sure how close they are to the traditional lycanthropes we’ve seen before.

Then, when you finally get a good look at them, they don’t disappoint. They’re just as vicious and bloodthirsty as any werewolves you’ve ever seen, so when the film shows them go on the attack, it’s a thing of horrific beauty.

On top of that, the mythology behind these creatures is pretty cool too. While The Cursed retains the essence of what it means to be a werewolf, it also adds a bunch of twists and turns to keep the lore fresh. This isn’t the 1940s anymore, and as much as I love the classics, I really enjoyed the way this film tinkered with the subgenre and created its own unique werewolf mythology.

Now, like every movie, The Cursed is far from perfect, so in addition to these strengths, it has its fair share of weaknesses as well. I’ve already mentioned the way it fumbles the atmosphere every once in a while, but for my money, the biggest flaw in this film is the characters. While they ended up being decent enough (but just barely), I had a really tough time with them in the first act. In fact, for most of that time, I even had a bit of trouble keeping track of who was who.

Other than the pathologist, these people just aren’t all that interesting. They don’t have any memorable quirks or endearing traits that charm their way into your heart so they feel almost interchangeable. This was a real problem throughout the entire first act, so up until about the 40-minute mark, I wasn’t even sure I liked the movie.

Thankfully though, once the pathologist showed up and the second act hit, this problem stopped bothering me. Sure, the characters were still rather bland, and even the pathologist was merely good enough, but the film’s strengths began to far outweigh this one major weakness, and I ended up really enjoying it overall.

So if you’re looking for some good new horror this month, I’d definitely recommend The Cursed. It’s not going to be for those fans who are just looking for a straight-up scare-fest, but if you enjoy slower-paced, atmospheric creature features, you’re not going to want to miss this one. It features an authentic period setting, an effective atmosphere of dread, and cool new werewolf mythology that keeps the subgenre fresh, so I’m hoping that this (along with Scream) is a sign of great things to come for mainstream horror in 2022.

The Cursed is out in theaters right now.