New month, new books! February is jam-packed with excellent releases and we’ve got you covered with all the info. If you missed January’s list, check it out and stay tuned throughout 2022 for even more terrifying tales. All books are listed by release date and subgenre, with a little description to pique your interest! Let us know if we missed anything in the comments below.

Ramses the Damned: The Reign of Osiris by Anne Rice and Christopher Rice. Sci-fi/Fantasy/Paranormal/Gothic.
“The gilded adventures of Ramses the Damned, iconic creation of the legendary bestselling author, continue in this breathtakingly suspenseful tale of a titanic supernatural power unleashed on the eve of war.” (Anchor)

The Violence by Delilah S. Dawson. Suspense/Thriller.
“Three generations of abused women must navigate their chilling new reality as a mysterious epidemic of violence sweeps the nation in this compelling novel of self-discovery, legacy, and hope.” (Del Ray Books)

String Follow by Simon Jacobs. Suspense/Occult.
“…a razor-sharp suburban gothic that exposes the sweating, bleeding truth of how kids become adults in twenty-first-century America. Simon Jacobs blends the startlingly original and the uncannily familiar, revealing the dark chaos that lurks beneath the surface of Midwestern suburbia.” (MCD x FSG Originals)

The Sharp End of the Rainbow by Madeleine Swann. Horror/Short Story Collection.
“The stories you’ll find at The Sharp End of the Rainbow will transport you to a dystopian wonderland full of bizarre characters who engage in even more bizarre antics. These stories will make you laugh, cry, and gag-but more importantly, they show humanity in the face of the truly absurd and act as a mirror to the world around us.” (Heads Dance Press)

Cherish Farrah by Bethany C. Morrow. Suspense/Thriller.
“Farrah, a young, calculating Black girl who manipulates her way into the lives of her Black best friend’s white, wealthy, adoptive family but soon suspects she may not be the only one with ulterior motives…” (Dutton)

The Book of the Most Precious Substance by Sara Gran. Occult/Psychological.
“…A mysterious book that promises unlimited power and unrivalled sexual pleasure. A down-on-her-luck book dealer hoping for the sale of a lifetime. And a twist so shocking, no one will come out unscathed.” (Dreamland Books)

Jawbone by Mónica Ojeda. Psychological.
“Interweaving pop culture references and horror concepts drawn from Herman Melville, H. P. Lovecraft, and anonymous ‘creepypastas,’ Jawbone is an ominous, multivocal novel that explores the terror inherent in the pure potentiality of adolescence and the fine line between desire and fear.” (Coffee House Press)

Dead Silence by S.A. Barnes. Ghosts/Sci-Fi Horror/Psychological.
“Titanic meets The Shining in this SF horror in which a woman and her crew board a decades-lost luxury cruiser and find the wreckage of a nightmare that hasn’t yet ended.” (Tor Nightfire)
(Check out Chrissie D’s review!)

The Night by Rodrigo Blanco Calderon. Mystery.
“Recurring blackouts envelop Caracas in an inescapable darkness that makes nightmares come true. Real and fictional characters, most of them are writers, exchange the role of narrator in this polyphonic novel. They recount contradictory versions of the plot, a series of femicides that began with the energy crisis.” (Seven Stories Press)

The Queen of the High Fields by Rhiannon Grist. Folk/Dark Fantasy.
“Two misfits, Carys Price and Angharad ‘Hazard’ Evans, strike out from their disenfranchised seaside town to take ownership of the High Fields, a mythical island brimming with world-bending promise.” (Luna Press Publishing)

Something in the Groove by Glenn Rolfe. Horror/Supernatural.
‘Lee, an urban shaman, gets tasked with tracking down a vinyl copy of the Dark Light EP by the ’80s hard rock band, Bad Obsession. With only one remaining member of the band alive and living in a home for those battling Alzheimer’s, Lee must return to Maine, a place where he’s battled evil forces before, and see if he can retrieve the album.” (Silver Shamrock Publishing)

Beyond the Veil: Queer Tales of Supernatural Love edited by A.R. Ward & Jelena Dunato. LGBTQ/Anthology.
“Sweet, scary, sexy, tragic… This collection of horror and dark fantasy contains fifteen darkly beautiful supernatural stories by authors from around the world, all on the theme of queer love. Here, you will find mythological beings, hallucinating explorers, ghosts, loups-garous, sentient paintings, and so much more…” (Ghost Orchid Press)

And In Her Smile, The World by Gordon B. White & Rebecca J. Allred. Dark Fantasy.
“This work of dark fantasy follows Serena and Jeffery, who independently discover a cult of women and an alternate creation myth. When a not-so-chance meeting brings them together, the two have an important decision to make. It also highlights the dangers attendant with telling women to smile.” (Trepidatio Publishing)

Idol: A Horror Novel by Regina Watts. Horror/Thriller.
“When Melba Daniels tricks her cousin into coming along to the secluded hide-out of the movie star who’s been sending her telepathic messages for years, things take a turn for the deadly.” (Painted Blind Publishing) 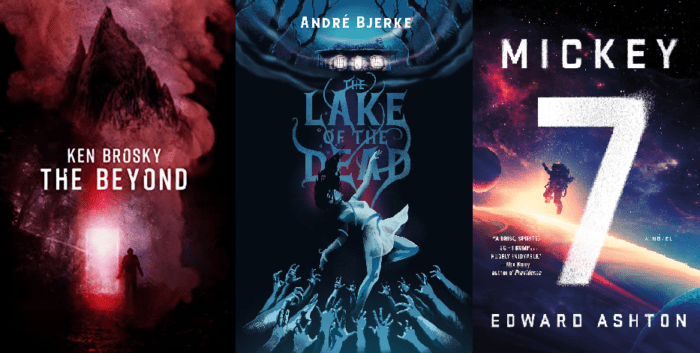 The Beyond by Ken Brosky. Crime/Paranormal.
“…Something terrible has happened inside the coal mine that defies all logical explanation, and it threatens the lives of every single person in town. Bodies are piling up at the funeral home, and many others have seemingly vanished.” (Timber Ghost Press)

Gwendy’s Final Task (Gwendy’s Button Box Trilogy Book 3) by Stephen King and Richard Chizmar. Horror/Suspense.
“…’Horror giants’ (Publishers Weekly) Stephen King and Richard Chizmar take us on a journey from Castle Rock to another famous cursed Maine city to the MF-1 space station, where Gwendy must execute a secret mission to save the world. And, maybe, all worlds.” (Cemetary Dance Publications)

The Lake of the Dead by André Bjerke. Horror/Crime Fiction/Thriller.
“Voted the all-time best Norwegian thriller, and its atmospheric 1958 film adaptation is regarded as one of Norway’s best films. This new translation is the first-ever American publication of Bjerke’s classic, which features an unusual mixture of murder mystery and supernatural horror that will keep readers guessing until the thrilling conclusion.” (Valancourt Books)

Moon Witch, Spider King (Dark Star Trilogy Book 2) by Marlon James. Historical Fiction/Fantasy.
“Sogolon the Moon Witch takes center stage and gives her own account of what happened to the missing boy, and how she plotted and fought, triumphed and failed as she looked for him.” (Riverhead Books)

The Valancourt Book of World Horror Stories Volume Two edited by James D. Jenkins and Ryan Cagle. Horror/Anthology.
“…More of the world’s best horror fiction and making it available to American readers for the first time. Featuring a wide variety of tales from Brazil to Malta to Nigeria to Japan, and all points in between, this new anthology is a must-have for any horror fan or anyone interested in contemporary world literature.” (Valancourt Books) 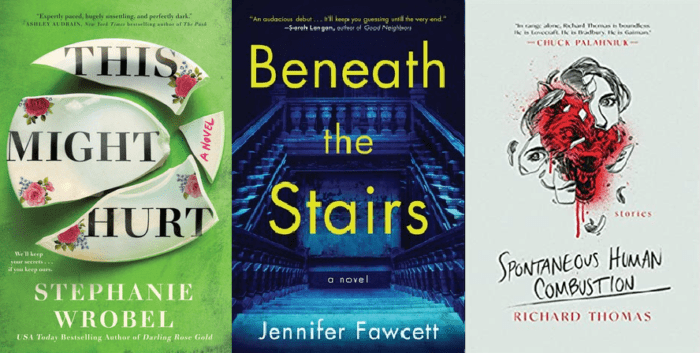 This Might Hurt by Stephanie Wrobel. Suspense/Thriller.
“A dark, thrilling novel about two sisters—one trapped in the clutches of a cult, the other in a web of her own lies.” (Berkley)

And at My Back I Always Hear by Scott Nicolay. Horror/Short Story Collection.
“Collection of previously published stories and novellas including ‘after,’ ‘The Croaker,’ ‘Tenebrionidae,’ ‘The Green Eye’ and ‘Noctuidae,’ as well as a new story and two original novellas.” (Word Horde)

Manhunt by Gretchen Felker-Martin. Body Horror/Post-Apocolyptic/LGBTQ/Splatterpunk.
“…This found family of survivors must navigate murderous TERFs, a sociopathic billionaire bunker brat, and awkward relationship dynamics—all while outrunning packs of feral men, and their own demons.” (Tor Nightfire)

Beneath The Stairs by Jennifer Fawcett. Thriller/Suspense/Horror.
“A woman returns to her hometown after her childhood friend attempts suicide at a local haunted house—the same place where a traumatic incident shattered their lives twenty years ago.” (Atria Books)

Extasia by Claire Legrand. YA/LGBTQ.
“This searing and lyrically written novel by the critically acclaimed author of Sawkill Girls beckons readers to follow its fierce heroine into a world filled with secrets and blood—where the truth is buried in lies and a devastating power waits, seething, for someone brave enough to use it.” (Katherine Tegen Books)

Five Deaths for Seven Songbirds by John Everson. Suspense/Thriller/Psychological.
“A modern Giallo, Everson’s homage to the stylish Italian mystery thrillers. When Eve Springer arrives in Belgium to study with the world-famous Prof. Ernest Von Klein at The Eyrie, an exclusive music conservatory, it’s the fulfillment of a lifelong dream. But that dream is soon to become a nightmare.” (Flame Tree Press)

Last Exit by Max Gladstone. Dark Fantasy/Horror.
“Fresh from winning the Hugo and Nebula Awards, Max Gladstone weaves elements of American myth—the muscle car, the open road, the white-hatted cowboy—into Last Exit, a deeply emotional tale where his characters must find their own truths if they are to survive.” (Tor Books)

Spontaneous Human Combustion by Richard Thomas. Horror/Sci-fi/Short Story Collection.
“In this new collection, Richard Thomas has crafted fourteen stories that push the boundaries of dark fiction in an intoxicating, piercing blend of fantasy, science fiction, and horror. Equally provocative and profound, each story is masterfully woven with transgressive themes that burrow beneath the skin.” (Keylight Books)

Tripping Arcadia by Kit Mayquist. Gothic Horror/Suspense/Thriller.
“A propulsive and atmospheric modern Gothic with all the splendour of The Great Gatsby…and all the secrets, lies, and darkness that opulence can hide.” (Dutton)

The Wolfden (Dead Rockstar Book 2) by Lillah Lawson. Occult/Dark Fantasy.
“If Stormy Spooner thought she’d hit rock bottom before, she was wrong. Before she had fully healed from her bitter divorce, a chaotic turn of events left several people dead. Now, her reanimated boyfriend Phillip refuses to take her calls. Heartbroken and confused by her newfound powers, Stormy returns to work in an attempt to find her new normal.” (Parliament House Press)

Burn the Plans by Tyler Jones. Horror/Short Story Collection.
“Featuring thirteen short stories and one novelette, Burn the Plans is a relentless journey into the dark places we end up when all of our plans go wrong.” (Cemetary Gates Media)

Happy reading, and see you next month!