I was very excited to see You Won’t Be Alone. There has been a lot of buzz building about this film, and I was anxious to see a foreign take on witches instead of one set in my backyard of Salem, Massachusetts. Plus, knowing that Noomi Rapace was attached didn’t hurt, either. With her recent foray into folk horror and last year’s Lamb still fresh in my mind, You Won’t Be Alone was my easiest Sundance pick.

The film begins in a small village in nineteenth-century Macedonia. The camerawork and photography were good right away, but I still have reservations regarding the use of 4:3 (black bars on the left and right) formatting in a 16:9 (widescreen) world. There are a few exceptions where this works, like if you’re attempting to make the film look like a VHS tape or resemble an older movie. I’m sure others will argue for claustrophobia, like with Robert Eggers’ use of it in The Lighthouse, but I don’t think that applies here. Regardless, it’s a personal feeling, and I don’t hold it against the filmmaker, Goran Stolevski, for using it. In fact, after about five minutes, I was over it.

We follow a cat, first sunbathing in a field, then making its way to a small village where a recent mother is tending to her baby and simultaneously turning away playing children from her home. Turning back after shooing the kids away from her doorstep, she reenters to find Old Maid Maria (Anamaria Marinca). Old Maid Maria is a ghost story, a vesper on the wind in the hills spreading throughout the region. Everyone hears stories, but it’s rare to come face to face with the shapeshifting witch and live to tell the tale. 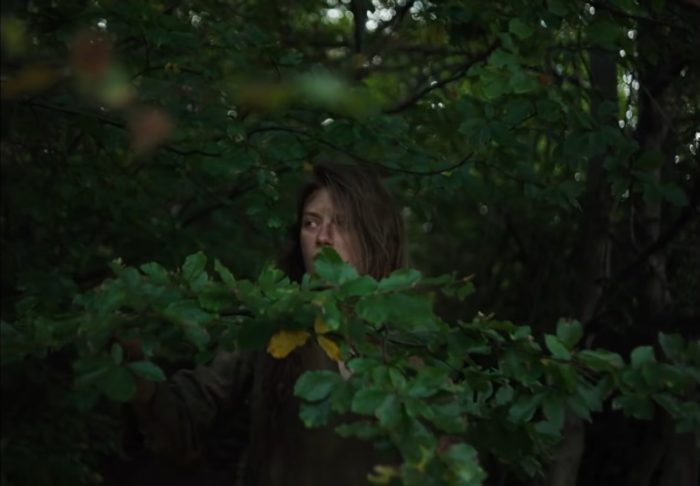 The witch stands over the newborn naked, covered in burns, giving us the unlikely hope that this is only A Nightmare on Elm Street. Fearing for her daughter’s life, the mother promises the bloodthirsty Maria that she can have her child when she turns sixteen, signing the pact by scarring her arm. The devilish entity isn’t wholly satisfied with the payment and marks the child by stealing her voice.

Years later, the witch shows up to collect the child whose mother has hidden away from the world in a cave. With no opportunity to have a childhood and no understanding of the world or its people, Navena (Sara Klimoska) leaves the cave with Maria and is almost instantly turned into a witch as well. The pair travel the countryside together, but as Navena grows curious about the things she hasn’t experienced, Maria casts Navena out to do whatever she wants, warning Navena she’ll never be accepted, cursed by fate to meet tragedy, too. Along the way, her fear and curiosity to try new things through different perspectives find her living life as various people (Rapace, Carloto Cotta, Alice Englert). The act of eating her victims’ organs through a mouth over her heart allows her to shapeshift. Each designation allows Nevena to grow and feel in a new way, and Navena finds love and beauty in the world she was kept from.

Stolevski’s script seemed to be rooted in an abundance of stories and folklore, including the tales of Grýla, Jólakötturinn, The Little Mermaid, and even Stephen King’s Storm of the Century. It was nice to see such researched folk stories mesh in You Won’t Be Alone, but I can’t consider it very original. I believe the film falters in how it cuts up its narrative.

Thematically, there is a lot to praise in You Won’t Be Alone. The old school beliefs instilled by Maria onto Navena before her journey have the same tonal appearance of belligerent ignorance as previous generations’ hang-ups toward the current one. Maria is treated cruelly—if it wasn’t already made apparent, by the burns on her skin, and her story offers a heartbreaking account of why she persists in being hard on Navena. Maria’s actions, as well as the actions of the world who made her this way, speak to the horrors of a world that created her.

Navena has never had a mother in the traditional sense. The one protecting her in the cave was gone all day, leaving her limited in her comprehension of the outside world and only able to learn through three holes at the top of the cave and the debris that occasionally flies in. Navena’s defiance of Maria in forcing her to see the world one-dimensionally becomes a metaphor for becoming oneself. The world is constantly changing, and Maria hopes to see Navena fail and crawl back to her. Navena leaves home and experiments with what life and humanity mean. On her journey, Navena does find cruelty in the identities she consumes, striving to find a connection that provides love and acceptance along the way.

I enjoyed many pieces of You Won’t Be Alone, from the cinematography to the seamless performances of the many actors stepping into Navena’s shoes. Stolevski’s use of the limited space in the camera he chose to film the movie works by favoring negative space a lot of the time. The film is very ambitious, but navigating the Terrence Malick whisper narrative and disconnected, bouncing storyline became work. It never evolves into a twenty-minute journey into space à la The Tree of Life (thank God!), but names and faces change so whimsically that it’s a lot to keep up with. I think arthouse fans of Robert Eggers and Ari Aster, those that enjoy what we might refer to as an elitist sense of “elevated horror,” are going to revel in Goran Stolevski’s film, while non-judgmental horror fans will teeter in the middle. The latter will notice nothing new in the narrative, in this other genre, crowning a more concise film, such as Under the Skin, to be the more original horror film about identity and humanity.

You Won’t Be Alone played as a part of Sundance. Focus Features picked up distribution rights, and the film is scheduled for cinematic release on April 1.