I’ve always treasured Regina Hall. I may not remember her earliest acting credit on New York Undercover, though I was watching that show at the time. I and others will think of her as an outstanding comedic actress, upstaging Anna Farris in the Scream parodying Scary Movie films. Her impeccable comedic timing and delivery were so good they brought her back to life for the sequels. In Master, Hall leads with dynamic precision even with the serious subject matter. It isn’t the actress’ first fair into dramatic territory. Last year’s Nine Perfect Strangers showed how powerful Hall’s range is with her emotionally resilient portrait of a single mother of four abandoned by her husband. Master is another true highlight to the talented work of Regina Hall and testament to the actress’ abilities.

On a New England campus more prestigious than Harvard, three women experience the massive weight of racism through various means. Right away, the school is unwelcoming. When Newly tenured Master Gail Bishop (Hall) arrives on campus, the door refuses to open for her. Meanwhile, Jasmine’s (Zoe Renee) introduction to Ancaster College finds her settling into the “haunted” room on campus where the school’s first Black students had hung themself. Up for tenure, Liv Beckman (Amber Gray) feels the pressure of the almost exclusively white board of professors and fits her actions to serve these “Masters.” 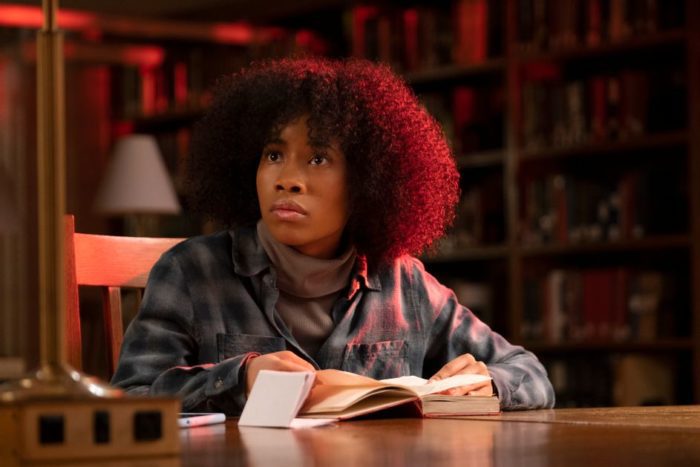 Micro-aggressions abound in Master, from the tossing of paper towels at Jasmine to clean up a spill to the white students asking if she’s related to Beyonce and the Williams sisters, who must’ve been her ticket into the school. The Get Out vibes are strong as she takes it in stride before things get claustrophobic during the anthemic singing as her white peers shout the explicit lyrics from Chop Mui’s “Black AGAVE.” Cloaked figures and psychological suffocation unearth the feeling of a modern Giallo film as Jasmine continues to feel stalked by a supernatural force.

Candyman aesthetics in Gail’s story give a threatening sense to another of Master’s ghost’s from the past. Gail discovers she’s moved into the house where a wealthy white family used to reside, and a Black maid was employed to clean up after them. Gail begins finding maggots and moths (similar to the one on the Silence of the Lambs poster) in the home and feels a foreboding insistence to clean up the mess. She also receives recurring calls from a woman looking for Elizabeth as if being asked to collect the messages.

I put the pieces together quickly, suspecting the film’s twist during a conversation between Jasmine and her Liv regarding representation in Nathaniel Hawthorne’s The Scarlet Letter. Maybe it’s because I’m from a Salem border town in an area where Hawthorne is so heavily traditionalized and forced down our throats starting at an early age with elementary school field trips to The House of Seven Gables and photo-ops outside of The Hawthorne Hotel. Still, any high school freshman from the area can confirm Jasmine’s essay concept regarding a lack of representation or misrepresentation. Jasmine could write a book about what isn’t present in the book of patriarchal punishment, where black symbolizes sin and evil.

Liv’s non-threatening tone toward Jasmine throughout the conversation ends with her stereotyping the student’s origins. The scene is well-crafted and, when combined with Jasmine’s conversation with her white classmate Cressida about her essay, unfolds a chunk of the mystery. Striving for tenure, Liv conforms to being harder on the only Black attendee at the college, failing Jasmine and transferring her own societal pressure onto the student. This results in backlash from Jasmine and places Liv under a microscope with the board.

I knew where Master was going from then on, but it didn’t matter. I loved how intricate and smart Mariama Diallo’s setup was structured, crafting parallels between the effects of the school’s historical backdrop in the modern age. Traditionalism in New England is especially rampant. I mean, this is where the European settlers landed and began this experiment known as America, very much through the enslavement of Africans. History is important, but not at the cost of subversion over inclusion. Master’s Ancaster campus represents these traditional colleges who embrace the despicable legends their walls contain, offering tours that mold the history into mystery instead of becoming informative, educative paths forward. If you haven’t guessed, we’re talking about Critical Race Theory (CRT).

Last year at Tribeca, I caught CJ Hunt’s documentary The Neutral Ground. What began as a satirical look at confederate flag-waving southerners evolved into a sobering look at how people of color in this country continue being oppressed by statues built celebrating the legacy of these enslavers during the Civil War. I loved that film. I thought about that a lot as Ancaster college celebrated its history of witchcraft on its students’ t-shirts. That connection of hanging witches subjugating any Black student entering the school, knowing how the story ends for the first Black student, holding power like a southern statue. Diallo’s Master has these strokes of genius in it, trading the south for the northeast, statues for mascots, and the campus’ ambivalence toward it. In the middle of the film, a recruiter video makes their Black teachers the focal point of tokenism, showing the outward façade of an accepting campus without ever attempting any semblance of change.

Master is a powerhouse film that has only gotten better for me upon writing this review and exploring the complex web of metaphors Diallo has woven. Every time I think I’ve found all there is to uncover in the film, I look again and reveal another layer. There’s a plethora of intrigue even if you figure out the film’s final twist ahead of time, and the performances are incredible. The mixing of ghost story elements and CRT creates a vigorous sense of fear through someone else’s eyes as we see the cycles of racism remain prevalent by the false notions of social change.

Master will have one more virtual showing at the Sundance Film Festival on January 23, with a 24-hour window beginning at 10 AM EST. The film will also premiere on Prime Video on March 18.