I don’t know about you, but I’m always on the lookout for good new monster movies. I’ll happily sit and watch just about anything that involves an evil creature hunting down a bunch of helpless victims, so when I saw the trailer for Shudder’s upcoming film Slapface, I knew I had to add it to my to-watch list.

The movie is about a lonely kid named Lucas who likes to spend time by himself in the woods near his home. One day, he encounters a strange monster that ends up becoming his friend, and soon enough, the creature takes him on a series of horrific adventures.

Right from the get-go, this Slapface trailer has a sense of dread that immediately hooks you in, and it doesn’t let up until the very end. You just know that terrible things are going to happen in this film, and I for one can’t wait to find out what they are.

Then, when we finally get to see this new monster, it looks amazing. Granted, we never get a good look at the creature, but what we do see is more than enough to get me on board. Just by looking at the thing’s back, I already know that I would never want to meet it in real life, so I’m sure I’m going to love it when I finally get to see the monster in all its glory.

On top of that, the creature in Slapface also seems to be a bit more complex than most movie monsters. It doesn’t appear to be pure evil, and that adds an extra layer that you just don’t get in the majority of genre films. Horror villains tend to be pretty black and white, so changing up the typical formula even a little bit always makes for an intriguing twist.

All this adds up to one really exciting new movie, and thankfully, we’re not going to have to wait long to see it. Slapface hits Shudder on February 3, so we’ll find out soon enough if it lives up to the promise of its excellent trailer. 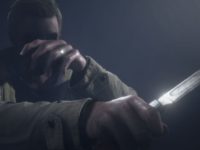