For those of us who read books like it’s going out of style, 2022 is cram-packed with horror literature of every subgenre. Your new favourite author is just a page away. Here’s a list of upcoming horror releases for the month of January. We’ll be putting out new lists for every month, so check back for more!

It Will End Like This by Kyra Leigh. Mystery/Suspense.
“A propulsive thriller that reminds us that in real life, endings are rarely as neat as happily ever after.” —Penguin Random House

Luckenbooth by Jenni Fagan. Supernatural/Suspense.
“A bold, haunting, and startlingly unique novel about the secrets we leave behind and the places that hold them long after we are gone, a ‘quintessential novel of Edinburgh at its darkest’ (Irvine Welsh).” —Simon and Schuster 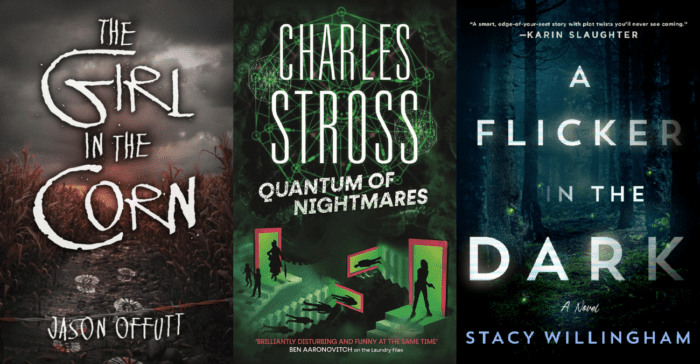 The Girl in the Corn by Jason Offutt. Horror/Dark Fantasy.
“Thomas teams up with the girl in the corn to save her world—and his—only to realize that he may not be able to distinguish good from evil before evil swallows them whole.” —CamCat Books

The Stars Are Not Yet Bells by Hannah Lillith Assadi. Gothic Horror.
“Through the scrim of fading memory, an elderly woman confronts a lifetime of secrets and betrayal, under the mysterious skies of her island home.” —Penguin Random House

A Flicker In The Dark by Stacy Willingham. Thriller/Suspense.
“From debut author Stacy Willingham comes a masterfully done, lyrical thriller, certain to be the launch of an amazing career. A Flicker in the Dark is eerily compelling to the very last page.” —Macmillan

The Bookkeeper’s Skull by Justin D. Hill. Horror/Warhammer Universe.
“On the capital world of Potence, young enforcer cadet Rudgard Howe is caught up in a bitter internecine feud to inherit his father’s position of Chief Enforcer. As the tithe fleets approach, he is sent on his first mission to ensure that the planet’s distant agri-facilities fulfill their quotas to the God-Emperor.” —Simon and Schuster

The Wakening by JG Faherty. Horror/Supernatural/Occult.
“A team of paranormal investigators, a priest and a defrocked priest with a dark secret join forces to combat of a vengeful ancient demon, and the evil spreading throughout a small New York town.” —Simon and Schuster 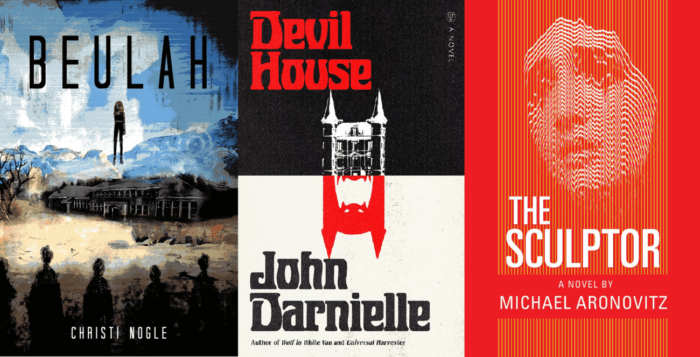 Beulah by Christi Nogle. Horror/Supernatural.
“The story of Georgie, an eighteen-year-old with a talent (or affliction) for seeing ghosts. Georgie and her family have had a hard time since her father died, but she and her mother Gina and sisters Tommy and Stevie are making a new start in the small town of Beulah, Idaho where Gina’s wealthy friend Ellen has set them up to help renovate an old stone schoolhouse.” —Cemetery Gates Media

Hold My Place by Cassondra Windwalker. Horror/Supernatural.
“From the Helen Kay Chapbook Award-Winning poet Cassondra Windwalker, an unsuspecting librarian falls head-over-heels for a married man, but when she finds herself caught up in a whirlwind romance, she discovers her new husband’s past wives have all met early deaths—and some aren’t ready to let go yet.” —Independent Publishers Group

Into the Midnight Void (Beyond the Ruby Veil Volume 2) by Mara Fitzgerald. Young Adult/Dark Fantasy.
“Emanuela has finally gotten what she’s always wanted. Since escaping her catacomb prison, she’s become the supreme ruler of everything under the veils. Finally, she has the power to throw aside senseless, old traditions and run things exactly the way they should be.” —Hachette Book Group

Road of Bones by Christopher Golden. Thriller.
“An American documentarian travels a haunted highway across the frozen tundra of Siberia.” —Macmillan

The Sculptor by Michael Aronovitz. Horror/Thriller. (eBook edition. Paperback March 1st.)
“At age seven, Michael Leonard Robinson commits his first murder, turning tragedy into an aesthetic. And now in his forties, fully realized, he has long erased his digital footprint. He is thirty years ahead of our most advanced scientists, military ops tacticians, and elite information tech specialists. He is a master of disguise. He can invent projected realities.” —Risingshadow

All the White Spaces by Ally Wilkes. Horror/Historical/Supernatural.
“A vivid ghost story exploring identity, gender and selfhood, set against the backdrop of the golden age of polar exploration.” —Titan Books

Generation X-ed edited by Rebecca Rowland. Anthology/Supernatural/Folk/Monster.
“In a unique anthology of monster, folk, paranormal, and psychological horror as glimpsed through the lens of the latchkey generation, twenty-two voices shine a strobe light on the cultural demons that lurked in the background while they came of age in the heyday of Satanic panic and slasher flicks.” —Dark Ink Publishing

Mastodon by Steve Stred. Horror/Monster.
“Tyler decides to hike into the area in search of his father, hoping to find him alive and bring him back to safety. But there’s a reason that area is prohibited to enter and even though Tyler doesn’t care, he’ll soon find out that the wilderness can hide some of the deepest, darkest fears known to man.” —Black Void Publishing

Holy Terror: Stories by Cherie Priest. Horror/Short Story Collection. (ebook edition. Hardcover has been released as of January 1st.)
“In her first collection of short fiction, readers will be taken on haunting journeys that showcase Priest’s unparalleled range.” —Ringshadow

Looking for more 2022 horror book releases? We’ve got you: