Sometimes you watch a movie, and it keeps you on the edge of your seat from start to finish. Other times, it bores you to tears within the first five minutes, so by the time the credits roll, you want that hour and a half (or however long it is) of your life back. And then there are movies like Last Radio Call. It’s not nearly bad enough that I feel like I wasted my time, but it’s also not particularly good either. It’s eminently watchable, but aside from an intriguing opening, it never really goes beyond that.

Directed by Isaac Rodriguez, Last Radio Call stars Sarah Froelich, Jason Scarbough, June Griffin Garcia, Ali Alkhafaji, KeeKee Takatsuki, Bert Lopez, and Makayla Rodriguez. It’s a found footage movie about a woman named Sarah whose husband David was a police officer that went missing about a year ago after responding to a call at an abandoned hospital. In the film’s present-day, Sarah hires a film crew to help her figure out just what happened that fateful night and her search puts her on a direct collision course with an ancient evil entity.

Last Radio Call begins with some of David’s bodycam footage the night he disappeared, and it’s pretty interesting. It immediately piqued my interest, so I was excited to find out what really happened to him. Then, it switches to Sarah talking about her husband and why she wants to investigate his disappearance, and that got me even more hyped to learn the truth about him.

Actress Sarah Froelich does a great job of conveying just how much her character Sarah misses David, so I bought into her right away. She finds that sweet spot between overly hysterical and overly stoic, and she seems like a real woman who’s still mourning the mysterious and tragic loss of her husband. I had no trouble sympathizing with her, so I cared about her story and her quest to find out what really happened to the love of her life. 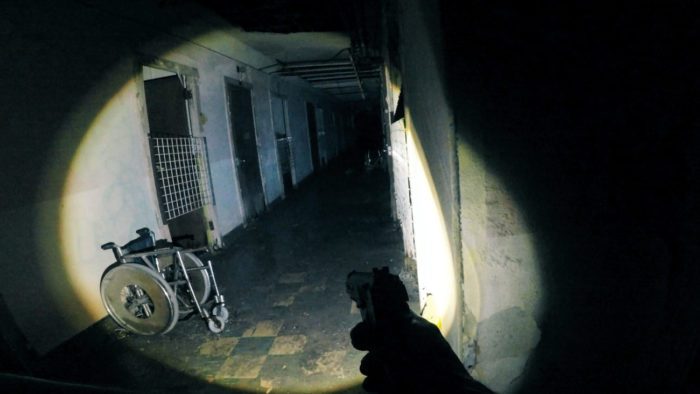 But unfortunately, the rest of Last Radio Call never lives up to the promise of those opening scenes. Once Sarah begins her investigation, the film becomes a super mixed bag in just about every respect. Take the found footage style, for instance. On the one hand, it feels totally natural, and you almost never question why the cameraman is still filming. Sure, you can quibble about a few scenes here and there, but for the most part, the found footage logic holds up from beginning to end.

On the other hand, the cameraman fades a bit too much into the background. He barely says a word throughout the entire movie, even when scary things are happening on screen. He almost never acts like a real character in the story, so at times it’s easy to forget that this is even a found footage film. It makes the format feel unnecessary, and I couldn’t help but think that this should’ve just been shot in a more traditional style.

Similarly, the characters in Last Radio Call are also pretty hit or miss. To begin, while Sarah is great in her first scene, she’s not nearly as good in the rest of the movie. She’s decent enough, but for some reason she’s just not as likeable as she was initially. On top of that, there are also a few times when she underreacts in some very strange ways, and those moments really bring the character down. Most notably, there’s a scene near the end where she destroys a tape recorder because the tape it’s playing is scaring her, but she does it with a complete lack of urgency. It’s not believable at all, and it even took me out of the film a bit.

All the other characters come and go very quickly, so you never get to spend enough time with them to really care much about them. They simply show up to play their part in the story, and then they leave. They feel more like walking plot points than real people, so the film stands or falls with Sarah. And since she’s not all that great after her opening monologue, she’s not nearly good enough to carry this movie. 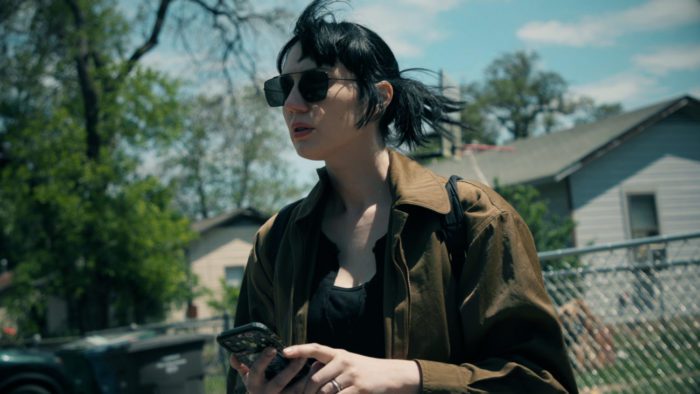 Finally, let’s talk a bit about the horror and the mystery behind David’s disappearance. I have to say, Last Radio Call moves along at a pretty good pace, so I never felt like it was dragging. Sarah moves from one clue to the next fairly quickly, and there are some genuinely intriguing moments that made me sit up and stroke my goatee as I wondered what could’ve possibly happened to her poor husband.

However, there are also just as many bland cliches that we’ve all seen a million times before. In particular, the third act goes all-in on the horror, and it has a very “been there, done that” kind of feel to it. If you’ve seen movies like REC and Grave Encounters, you’re not going to be surprised by much of anything here, and for me, that was the real nail in the coffin for this film.

See, throughout most of its runtime, I found myself going back and forth with Last Radio Call. Sometimes I liked it, and other times I didn’t, but when it failed to stick the landing, that sealed the deal for me. As the credits began to roll, I simply couldn’t say that I enjoyed the film overall, so I’m sorry to report that I wouldn’t recommend it. Sure, there’s enough good here that it’s far from a waste of time, but the bad in it ultimately outweighs the things it gets right.

Last Radio Call is premiering on the Terror Films YouTube channel on January 14, and then it’ll hit VOD platforms a week later, on January 21.