In my opinion, the best trailers are the ones that give you a little taste of what you can expect in a movie without letting you know what’s really going on. They spoil as little as possible while still getting you interested, so they’re basically the best of both worlds. They don’t come around nearly as often as they should, but luckily for us, the trailer for Alone with You fits that mold just about perfectly.

Written and directed by Emily Bennett and Justin Brooks, the film is about a young woman who prepares for a romantic evening with her partner, but soon enough, she begins having visual and auditory hallucinations that bring her face to face with a very uncomfortable truth.

What is that truth going to be? And what’s going to bring about those strange hallucinations? I have absolutely no idea, and to be honest, I don’t want to know. I want to get those answers as I watch the film, and thankfully, the Alone with You trailer lets us do exactly that.

The first half of the trailer just sets up the general premise of the story, and then the rest of it is all about the strange, seemingly paranormal phenomena we’re going to experience. Reality appears to be slowly unraveling around the main character in a way that perfectly blends the supernatural and psychological subgenres, so it looks like we’re going to get the best of both worlds.

In that regard, this trailer reminds me a lot of Mike Flanagan’s 2014 gem Oculus, and if the film is anything like Oculus, we’re in for something really special. That movie messed with my head like nothing else I’ve ever seen, so if Alone with You is even half as effective, it’s going to be a wild ride.

I absolutely cannot wait to find out if Alone with You lives up to the promise of its trailer, and thankfully, that wait isn’t going to be very long. While the movie debuted at a few festivals last year, it’s going to hit VOD platforms on February 8. 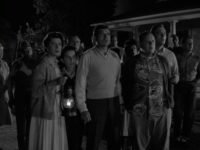