30 Monedas (30 Coins) is a show that was not on my radar whatsoever. Honestly, I had not even heard about it until my friend at my local six-pack shop recommended it to me. Hot damn, am I glad he did. The thing about this show is that it is definitely horror but changes its lane so many times into so many other different genres, from comedy to melodrama to romance. There is no doubt that 30 Coins is a fantastic feat of television, but does the campiness overrule the moments of intense horror, or are they there to provide levity from the visceral Lovecraftian and deeply psychological horrors that reside in this small town? I guess all that we can do is take a look into it, right?

The first two episodes start off heavy. Really heavy. But what is an HBO show without highly conceptual opening credits? The credits are a hype stylized recreation of Jesus’ crucifixion, as onlookers laugh and sneer with joy. We see Judas Iscariot receive his payment of 30 silver pieces, hence the title, right before he runs away to hang himself. It’s absolutely brutal, and it comprises the majority of my knowledge of the religious references strewn throughout the show.

We’re thrown right into the thick of the backstory of the coins, which could be argued are the main antagonists of the show. A man walks into a bank and shoots a handful of people while taking many bullets right back from them. He walks into the security deposit box room, blows up one of the boxes, and takes a coin out. He takes a few more bullets on his way out of the building before getting into a car, taking an amulet off of his neck, and immediately dying. This basically tells us anyone in possession of one of these coins is immortal.

Now we enter the town of Pedraza, Spain, where the lion’s share of our story takes place. We’re quickly introduced to the town veterinarian Elena (Megan Montaner) who is assisting with the birth of a pregnant cow. Only, the birth isn’t what it would seem to be when a human baby is pulled out of the cow. Newley elected mayor Paco (Miguel Ángel Silvestre) and his wife Merche (Macarena Gómez) are giving a tour to the media about their new abattoir when Paco is interrupted by an aide who shows him a video of the human cow birth. He quickly departs the abattoir and meets up with Elena, and the Alonsos, to see the truth for himself. This is when the incredibly badass Padre Vergara (Eduard Fernández) enters the picture. 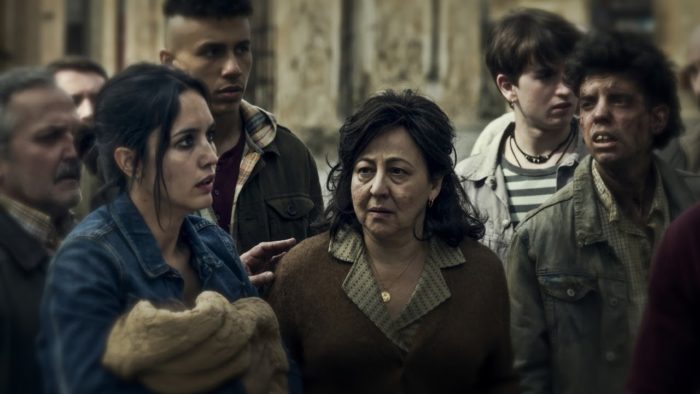 Padre Vergara is the new priest in town, and there are some reservations about him, especially when it is found out that he was nearly excommunicated when he performed an exorcism on a young kid, which resulted in his death from a heart attack. Padre Vergara, even with his first-hand knowledge of the evil in this world, tries to chalk it up as nothing more than a hoax. Elena is not buying this at all. After Antonio (Javier Bódalo) unsuccessfully attempts to kill the child and nearly unsuccessfully attempts to take his own life, Carmen (Carmen Machi) decides to take the child in.

This is when we see that the cow-baby birth was 100% not a hoax when a few days after its birth it is nearly 4 feet tall, snarling, and basically looks like a demon baby. Knowing that things are severely wrong, Elena and Paco go to Carmen’s to take the baby to the hospital and then call Social Services, but things don’t go as planned. Carmen attacks Paco, which triggers Elena’s flight-over-fight response. When she gets back to Carmen’s with the police and Padre Vergara, Paco is woven into the intricate wool cobwebs. 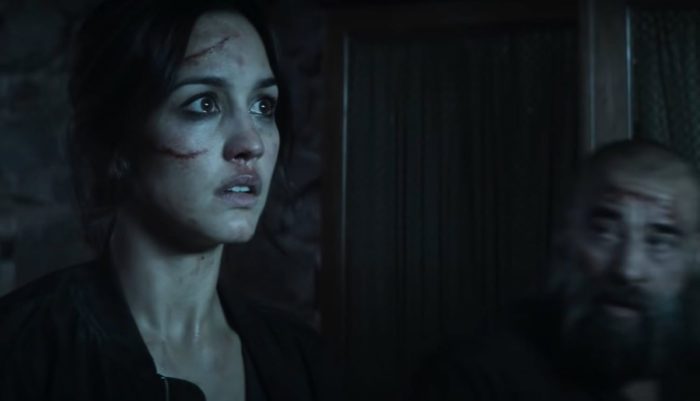 After a huge fight, Carmen is “dispatched.” Elena goes to meet Padre Vergara upstairs, and she sees him sitting down, looking almost defeated. She looks down on the ground to see an empty skinsuit, which was once inhabited by the baby. What was inside of it? A crazy-ass spider creature that would make H. P. Lovecraft shake in his racist lil’ boots.

The first episode was enough to immediately hook me, and make me crave more. We’re given some interesting looks into Padre Vergara’s history, but there are still many more cracks to fill. Why does he have all of these guns, and why is he such a badass? Does he plan on literally fist-fighting every demon he comes across? I mean, I would be here for it if that’s the case. There are perfect elements of cosmic horror interwoven with some good religious and psychological horror. The characters blend interestingly together, and there are some relationships that look like they will be forming, and some important relationships that seem like they are already falling apart. My thought is Paco and Merche won’t be married too much longer…but what about Episode 2?

“Ouija” takes a more psychological route with its horror, relying on us to create the horrors we hear of. It starts with people in the diocese talking about wanting to rid themselves of Padre Vergara, due to his unsuccessful exorcism. Shortly after, we see Elena working at Roque’s (Antonio Velázquez) house with one of his injured horses. He proposes a plan to have her quit her job and come work full-time for him, at triple her current pay! I’d take that in a heartbeat. She politely declines before going to get coffee with him.

This is when we find out that Roque and Paco have a history, which doesn’t seem like a positive one. Paco is taken aback when he sees the two of them together and acts very passive-aggressively about the whole thing. Richardo (Alberto Bang), who they refer to as Richi, comes into the bar they are all in and steals a bottle of alcohol, at the behest of the bartender who is working. 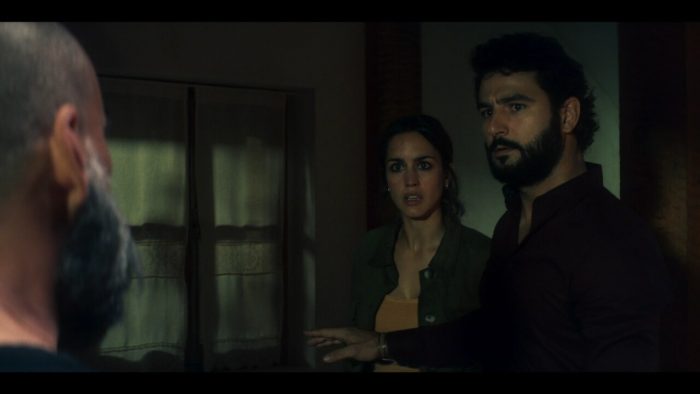 Richi and his group of delinquent friends go out to a cemetery to play around with an Ouija board, drink, and have some fun. Unfortunately for them, all does not go as planned. While playing with the board, all of their flashlights go out and their one friend Sole (Carla Tous) goes missing. The name of the ghost they are contacting turns out to be Giacomo, which is the demon referred to by Padre Vergara when talking about the young boy he performed the failed exorcism on. Interestingly, Giacomo translates to Supplanter which means forcefully taking someone/something, which is incredibly apt for what we know about this demon thus far.

They end up calling the police, who show up searching for her. Soon we become privy to the information that her mother killed herself at Roque’s mansion, and that Sole is the last person her father has left. After a night’s worth of searching, they cannot find Sole and hope she will turn up soon. This is the first time we hear of any time passage when we find out that this episode takes place nearly a month after the first episode. Roque and Elena start spending more and more time together, which continues to make Paco weirdly jealous.

Paco and Merche have a ceremony for a hotel they are opening up, when Sole’s father Martin (Secun de la Rosa) shows up, shotgun in hand, demanding they find his daughter asap. We’re given our first true piece of horror here when Vane (Carla Campra) and her friends are in a group chat together, and Sole starts responding back to them before Sole eventually calls Vane telling her that she is stuck inside the board. Elvira (Abril Montilla) gets Elena to join them for one final Ouija session, where they hope to get Sole back. And they do…but it’s not her. Giacomo has taken her over, with the singular goal of getting the coin from Padre Vergara. 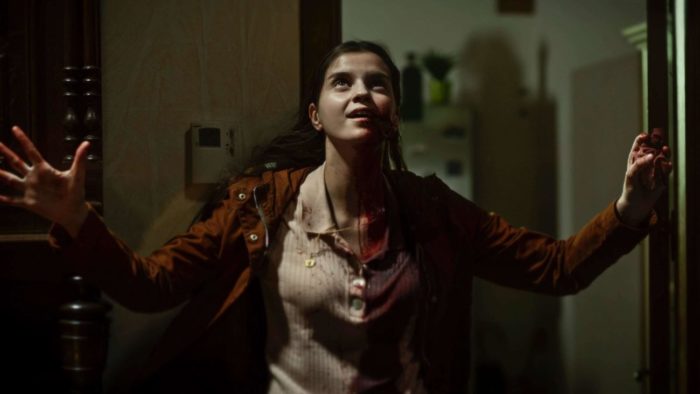 Sole comes out from the beyond with the power of foresight; she is able to see the death of people around her right before they happen. This leads to a few great moments, one being someone who gets completely smashed between two cars, which—pardon my lack of elegance—is pretty gnarly. After an Edgar Wright-esque sequence where Sole/Giacomo manipulates the TV to tell Padre Vergara what he must do, Solicomo (we will call her that from now on) cuts off her finger and then cuts through her cheek a la Heath Ledger’s Joker. Solicomo tells Padre Vergara that’s just the start of what she will do to her body if they don’t get the coin.

This is when we get introduced to the Shadow Priests, the people who are trying to get the coin(s), and who are making Sole do these crazy things. They rip a hole in Elena’s ceiling and somehow fix it immediately—the power of Christ, I guess! Once everything is finally resolved for the episode, Paco tells Elena he doesn’t want her to go and travel with Roque because he needs her, and he can’t handle all this wild supernatural stuff without her, proving once and for all that he really is into her and that he is being fairly selfish. The final moment of the episode is when we see Antonio, who is still in the hospital from trying to commit suicide in the previous episode, talking to the Shadow Priests…this can only get more interesting from here!

So there are a few things I’ve gathered from these first two episodes: Paco is deeply into Elena and doesn’t really care for his wife; the Shadow Priests are on a mission to get these coins back; Elena is a vet but for some reason is being thrown into all of this weird stuff going on; Giacomo will stop at nothing to get what they want. 30 Coins started off strong and is keeping up the pace throughout the second episode. I am too extremely excited, and a bit scared, to see what happens next and where the show is going to take us. If I were forced to watch two episodes and tell people whether I would recommend it or not, it would be a resounding: YES.

Looking for more on 30 Coins? We’ve got you: