I remember the first time I watched Mandy, I absolutely hated it. In fact, I was so bored by the film that I turned it off before I even got to the halfway point. The weird story unfolding before my eyes was nothing like the ultra-violent gorefest people were ranting and raving about. Instead, all I saw was an agonizingly slow plot and some bizarrely psychedelic visuals, so I simply couldn’t understand why it was getting so much buzz.

But then I watched it again, and I decided to force myself to stick with it until the end. I figured I should at least see the whole thing before I declared the rest of horror fandom completely out of their minds, and I’m so glad I did. By the time the credits rolled on that second watch, I was completely hooked.

I was finally able to see Mandy for what it truly is, and it resonated with me in a way no other film ever had. While it features enough brutal violence to satisfy the gorehounds among us, and its visuals are trippy enough to make you think somebody might’ve spiked your drink, there’s so much more to it than that. At its core, it’s a heartbreakingly beautiful story of love, loss, and revenge, and it gave me an experience of cinematic catharsis that nothing else has ever been able to match.

My Story of Love and Loss

To understand why I love Mandy so much, let me tell you a bit about my story of love and loss. Back in January of 2014, my father was diagnosed with lung cancer. Thankfully, his doctor said it was still stage 1, so he was going to be just fine. A surgeon would be able to remove the part of his lung with the tumor on it, and he was going to live happily ever after.

Fast forward 13 months to February of 2015, and my worst fear came true. When my dad’s doctors performed the surgery, they found that the cancer had actually spread more than they thought, and in a little over a year, he was dead.

I had lost close family members before. I had even lost one of them to cancer, so I already knew how terrible the disease was. But this was different. This was my father. Losing him was unlike anything else I had ever experienced, and if you’ve never lost a parent yourself, I can’t really explain how devastating it is. The best I can do is say that a few years later, my mom told me that the day my dad died was the first time she had ever seen me cry in my adult life.

So when I watch Mandy, I don’t just see a cool story about Nicolas Cage going crazy and hacking up some bad guys with a chainsaw. No, I see a story about my father, cancer, and me.

That might sound a bit strange, so let me explain. Obviously, my relationship with my dad was radically different from Red’s relationship with Mandy, but in a very real sense, love is love. Sure, we love different people in different ways, but at its core, the thing that makes it genuine love always remains the same.

What’s more, as the film plays out, Red’s experiences track pretty closely with my own. For example, when Mandy is brutally murdered right in front of his eyes, it brings me back to the day I saw my dad take his last breath.

Similarly, when Red rages out in his house afterward, it reminds me of all the pain and anger I felt when my dad died. I didn’t act it out physically the way Red does, but on the inside, I was boiling hot with fury. Granted, I obviously couldn’t blame any people for my dad’s death, but there was one culprit I could point the finger at: cancer itself.

To this day, I still utterly detest cancer with every fiber of my being. It’s taken away some of my closest relatives, including my father, so I’d like nothing more than to see the disease burn in hell for all eternity. Unfortunately, that can’t actually happen, but watching Mandy gives me the next best thing.

When Red tears through the Black Skulls and the Children of the New Dawn, it’s incredibly satisfying. It allows me to project all my rage and anger against cancer onto those despicable characters, and when they get the comeuppance that both they and cancer deserve, it’s a thing of utter beauty. For a hardcore movie fan like me, it’s a super cathartic experience, and it gives me a safe outlet to release some feelings that would otherwise fester inside me in potentially unhealthy ways.

The Cathartic Value of Revenge Horror 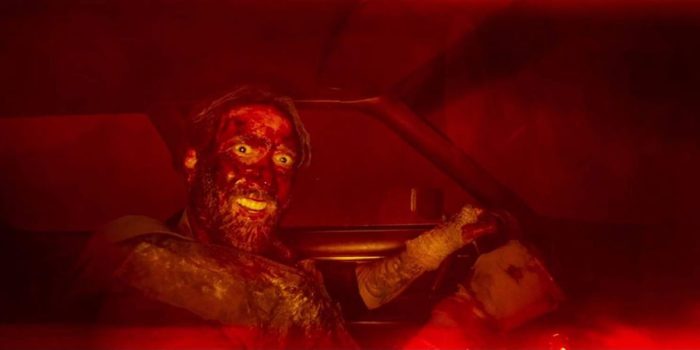 And in my opinion, that’s the best thing about the revenge horror subgenre. Sure, these movies have the cool action and bloody violence we often crave when we just want to veg out on the couch and relax, but if we dig below the surface, there’s a whole world of meaning to explore there as well.

Revenge films give us a cinematic catharsis that no other horror subgenre can match. We all have some sort of pain and anger lingering inside us, and revenge horror gives us a safe outlet to release those dark emotions. It allows us to project our feelings onto characters who act just like the people and things that have hurt us, and when those characters get hacked to pieces, it can be super gratifying.

These movies come in all shapes and sizes, so however you may be hurting, there’s a revenge horror film that’s just right for you. For me, that film is Mandy, but for you, it might be Revenge, Carrie, The Virgin Spring (the movie that inspired The Last House on the Left), or any one of the numerous other classic entries in this venerable horror subgenre.