Grimmfest is the festival that keeps on giving, with weekend and one-day events around the year as well as the main festival every October. Here are the four premieres that they graciously brought to the homes of UK genre-lovers in time for Christmas this year. 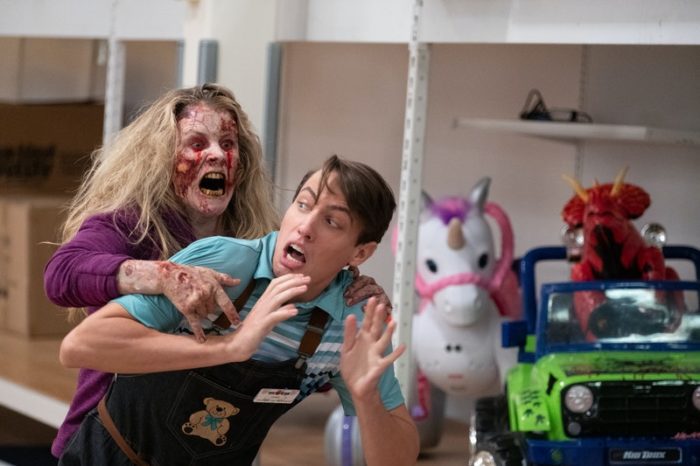 This wasn’t quite the “riotously funny splatter satire” that I’d been led to expect, though I can’t deny Black Friday is entertaining. The film is set in a warehouse-style toy store in which the staff (who try their best to smile and get along) are getting ready for invading hordes of shoppers but hardly expecting that said shoppers are to be hosts to invading hordes of alien parasites. If that sounds like a fairly standard model for a horror-comedy, sure, it is, and writer Andy Greskoviak applies that template with ease; including a scene where the staff huddle in the back room and air their feelings, a pointless/heroic sacrifice, random individuals discovering new purpose and lots of rather squishy violence.

Unfortunately, there are more embarrassed squirms than actual laughs to be had here; I don’t know why, but it came as a shock to find that Bruce Campbell (who here plays sales-focused manager Jonathan Wexler) has grown out of his cheesy grin. The cast as a whole is definitely worth watching though, and have the right chemistry for diverse and reluctant co-workers; most notably, Devon Sawa as the jaded Ken, Ivana Baquero (with more personality than a pretty face would traditionally permit in a film like this) as Marnie, and—my favorite—Stephen Peck as floor manager Brian. Considering Black Friday was set in a toy store though, not a lot of use was made of the actual toys in terms of plot, weapons, or humor. Who knows; perhaps that might be rectified in the inevitable Cyber Monday sequel.

Perhaps I’ve been spoilt by other “dark sci-fi” in recent months, such as Ultrasound and Come True, but this one really disappointed me. The story centers on Chloe (Alexys Gabrielle) who, despite seeming pretty together on the outside, is struggling to get over the trauma of an accident. She takes up the offer of a new treatment technique, involving an Artificially Intelligent Domestic Assistant (voiced by Emily Atack), which combines near-future “smart” house technologies with talking therapy and a personalized care plan. All well and good until AIDA starts writing its own code and cutting others out; all for Chloe’s good, of course. The inspiration of 2001’s HAL is pretty clear in AIDA’s round, red electronic “eyes”; and as for the plot, imagine an episode of Dimension 404 or Black Mirror written by Ray Bradbury.

OK, so Dark Cloud may not be especially original, but I don’t think every film has to be: Filmmakers can take familiar ideas and express them in their own way, or use them to demonstrate an opinion. In this case, though, the writing was so simplistic that there was little apparent beyond that basic plot. Some potential was hinted at occasionally when Chloe’s mental health was manipulated by AIDA, but it wasn’t explored with any depth. Some interesting visual effects were used during Chloe’s “episodes,” but otherwise, the production seemed almost dumbed down, too; with clichéd touchscreens, electronic voice, and glamorously made-up female characters. That said, the ending was excellent; it’s just a shame so much of the film until then was so bland in comparison. 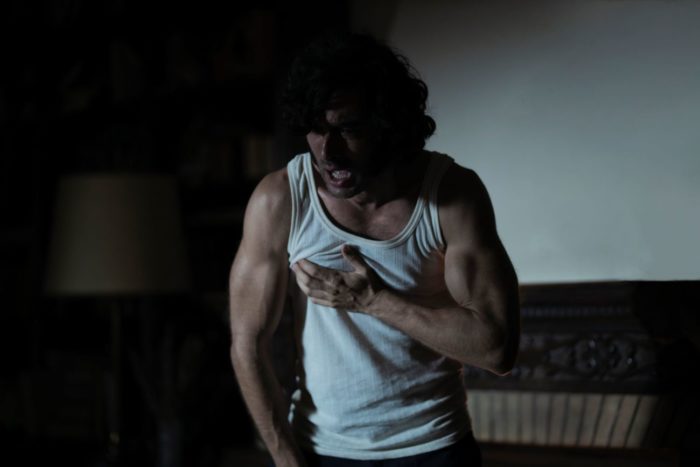 The House of Snails is about Antonio Prieto (Javier Rey), a writer who is looking for both solitude and inspiration. He rents a large house for a month, in southern rural Spain, hoping that local culture will do him good; but the locals are both unfriendly (as in American Werewolf in London) and decidedly odd. Still, at least his estate agent Berta (Paz Vega, like a young Penélope Cruz) is pretty and Padre Benito (Carlos Alcántara) the priest is welcoming. It doesn’t take long for Antonio to be haunted by the noise of wolves in the woods at nighttime and taunted by the lure of backwoods legends, which steadily seep into his fiction.

I’m pleased to say The House of Snails definitely made up for the disappointment of the last two films: I was very impressed. It was creepy, beautifully produced, and rich with genre influences and yet largely shook off clichés. The rustic retro setting is quite believable, and the performances are all smoothly natural. But what I really liked was the slippery plot: I went into it with an expectation that seemed to be about right at first, and then it took a surprise tangent; I thought it was one thing, and then I was teased into thinking it was something else. There were hints of the traditional werewolf tale, something akin to the story of Frankenstein, scenes reminiscent of The Shining, and then psychological mystery. I’m not entirely sure how I feel about the ending, though; but that’s OK: it means I’ll probably watch House of Snails again to get some satisfaction.

See For Me (Randall Okita, Canada)

Day two of Grimmfest’s Christmas Horror Nights 2021 definitely featured the better double bill, and See For Me impressed me to no end. I was wary before the film started because there have been several which embrace a protagonist’s disability as a plot device. The representation was very well done here though, and clichés are virtually thrown out of the window. Skyler Davenport plays Sophie, who makes a living cat-sitting for rich folks since becoming blind (Davenport themselves is a visually-impaired actor). She has excellent spatial awareness, to the extent that she can find her way around a new place after one brief tour and look after herself just fine, only seeking help in an emergency. An emergency arises on the first night at a new gig when sophisticated crooks break into the home; and Sophie seeks help first from the police and then from Kelly (Jessica Parker Kennedy), on the other end of a phone app.

The film takes a little time to introduce its central character—and her unpredictable moral compass—thoroughly, and there was the first aspect of the film which really satisfied me: so often when we see someone with a disability on screen, they are presented either as innocent, upright individuals, or if the disability comes in the form of a scar or deformity of some sort, as twisted and wicked. Sophie is quite an individual! The story may have looked a little predictable when the three antagonists first arrived, but it was all executed so well that the originality of the partnership between Sophie and Kelly thoroughly trumped any familiar tropes; even the minor characters are well-drawn, with distinct personalities and more than competent performances. What else do you need? Oh yes: See For Me was tense, beautifully shot, and just the right length too.