When I was about five years old, roughly sixty seconds of television changed my life.

Truth be told, I don’t remember much about that day. It’s not a moment in time connected to anything particularly profound or nostalgic about my life. It’s not tied to a moment of bonding with anyone in my family over late-night TV that a boy my age had no business watching. As best as I can remember, I was just flipping through television channels, happy as could be—and stumbled headfirst onto a nightmare that would haunt me for over twenty years.

All I could remember were bits and pieces: a boy my age lying on his bed, wrapped in red ribbons. That same boy frantically trying to open the door of his bedroom as the room seemed to stretch and the door seemingly towered above him. And then, the clown.

It’s one of my most vivid memories from that period in my life: that cartoonishly large clown head with a frozen, sinister smile that burned itself into my memory. Then, as if that wasn’t horrifying enough, the boy then opened the blinds and the clown was outside his window—only now, its face had changed to a much angrier expression. 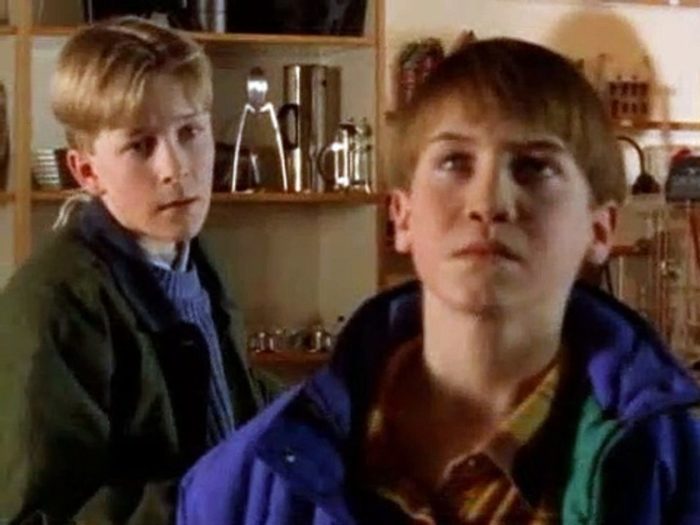 It was, at this point, that little five-to-eight-year-old me completely lost it, running from the small television set we had in our kitchen and over to the computer desk where my mom was working, likely not prepared to need to instantly comfort a small, traumatized child. By the time I was calm, whatever I had been watching was long since finished—not that it stopped me from changing the channel.

From that day on, clowns became a source of outright terror whenever I would encounter them—which thankfully was mostly limited to annual parades and the occasional trip to the circus. And what nightmares I had almost always featured something which stemmed from what I had seen—a bedroom door that wouldn’t open, red ribbons binding me to my bed, and a clown waiting outside my window with a face frozen in hideous laughter.

These nightmares would continue for years, and by the time I was in the fifth grade, I got it into my head that something needed to be done about it. At first, I turned to books, burning through my school library’s entire stash of Fear Street books (the Goosebumps books were almost always checked out and the couple that I read felt inferior to the Fear Street ones). My thought process, I imagine, was something along the lines that growing more comfortable with horror might mean that the clown would leave me be—or at least, that I might find it less terrifying. As I grew older—and at the same time the internet had grown into a place where one might find lost things—I decided that I needed to figure out just what it was I had seen.

My search proved futile—it turns out “clown, scared child, red ribbons” was a fairly generic description and every forum I searched through led to about a dozen different suggestions that each person swore was the answer.

This eventually became a cycle that I fell into: Search, come up empty, give up, then start looking again a few months later. There were a few times where I wondered if I hadn’t just imagined the whole thing. 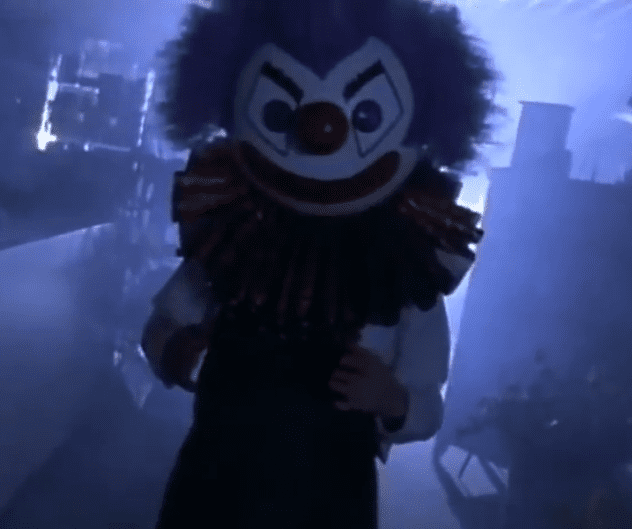 Meanwhile, it turns out reading all of those horror books meant that I wound up…enjoying them. I moved on to the big leagues of the likes of King and Barker—and of course, the first King one I read was the one about the clown. And, watching each new suggestion that I happened across in hopes of finding my terror meant that I watched a lot of movies in the “creepy clown” genre—and trust me, by like the fifth different one they stop being scary and start being weird

Skipping forward a little bit so I don’t take up all your time, by 2021 I hadn’t thought about the clown for years—I’d had college to worry about—when a tweet from one of the many horror-centric accounts I follow caught my eye. It was about the classic Are You Afraid of the Dark series, and which episodes were still terrifying to this day. An idea came to me out of nowhere: all this time I had thought I’d seen a clip from some obscure, made-for-tv horror film, but what if I was wrong? I made a quick Google search—“Are You Afraid Of The Dark clown”—and there, the third photo down from the top: a terrified boy in his bed, wrapped in red ribbons.

The episode title? “The Tale of the Crimson Clown.”

Safe to say, it was the fastest I’ve ever signed up for a streaming service’s free trial, and roughly twenty minutes later, there he was, straight out of my worst nightmares.

So, after about…let’s say a good ten years of searching (and taking about ten years of your time rambling on about my childhood nightmares), I present to you: “The Tale of the Crimson Clown.”

Funnily enough, “The Tale of the Crimson Clown” plays out like a twisted, extreme version of a classic: Charles Dicken’s A Christmas Carol—not something traditionally regarded as horror, but later this year one of my colleagues is going to convince you that it should be. But instead of greedy, miserable old Ebeneezer Scrooge, “The Tale of the Crimson Clown” tells the story of Sam, a smarmy, obnoxious, insufferable little brat. 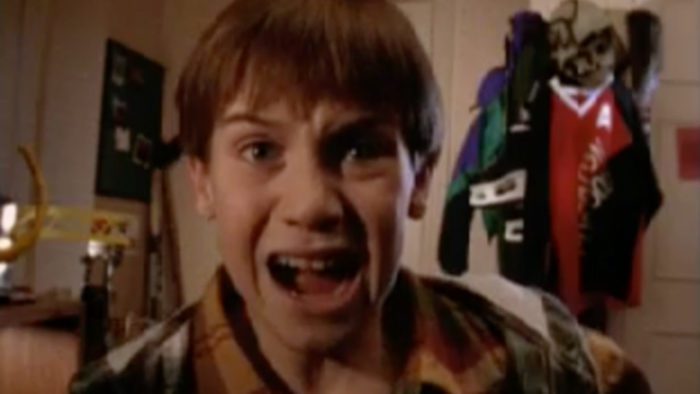 Seriously, Sam is the worst. He steals the money his older brother Mike has saved up to buy a birthday present for their mother and uses it to buy a video game. He lies to their mother about why he and his brother got home well after they were supposed to. When his brother confronts him about his theft, he smirks, shrugs his shoulders, and says what amounts to “well I’ve already spent the money, sucks to suck.” He’s a bad kid—and worse, he’s the sort of bad kid who up until this point has gotten away with everything and has no reason to think that will change.

So after Mike has discovered that Sam has stolen his money and he’s no longer able to buy the present he wants from their local antique store, he’s decidedly fed up with his brother’s behavior—and decides it’s time to do something about it. He points out a strange clown doll he had seen while browsing earlier and tells Sam that it’s the “Crimson Clown” that’s going to get him for being bad.

From here, most of the episode is a fairly slow affair that isn’t particularly scary—the clown doll pops in and out, there’s a lot of jump scare fakeouts, and Sam has a particularly vivid hallucination of the clown’s arms reaching out to him from the TV. It does build up a strong sense of Sam’s growing unease—bordering on paranoia—but it’s nothing particularly scary, especially given some of the things we’ve seen in other episodes of the show.

Then, at about the eighteen-minute mark in the episode, it’s finally time for Sam to go to bed after a long evening of anxiety, and good lord, how did this sequence ever get approved to air on a children’s television network?

Sam’s bed falls away, and he finds himself in the antique shop from before, now bathed in otherworldly blue light. He tries to escape, but the door is closed, and when he looks behind, he sees the shopkeeper from before—only now, his head is that of the clown doll from before. When the clown traps him with red ribbons, Sam wakes up with a start, only to find that he’s been strapped to his bed by the same red ribbons—he’s still dreaming, and now the Crimson Clown is in his bedroom. 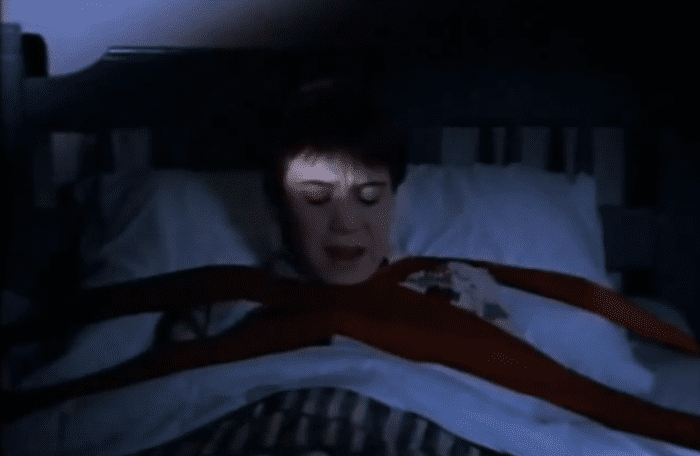 Seeing the Crimson Clown after more than twenty years, it’s just as horrifying as I remember—if not more so. The frozen face on the oversized head, the human movements paired with said fixed smile, and on top of that, the Crimson Clown is everywhere Sam tries to turn to either find help or escape. He’s in Mike’s bed, he’s outside the window, he’s in the door—the Crimson Clown feels like an all-encompassing threat that makes Sam’s bedroom feel overwhelmingly claustrophobic.

There’s something…almost predatory about the Crimson Clown and the way he terrorizes Sam. The clown’s design and costume certainly play a huge role in this, but there’s something…else about it. It’s a combination of the breathy, excited, almost hungry way he tells Sam that he’s been a “bad kid” and that “nobody will help him,” the way he seemingly creeps towards Sam underneath his covers, and the feeler-like red ribbons that wrap around the child and trap him. All the while, the Clown’s voice stretches between a deep baritone and a high-pitched Judge Doom-esque squeal. The whole sequence feels…almost violating, in a sense, especially given that it takes place in a child’s bedroom—a space that should be a safe one.

Finally, this sequence is absolutely overflowing with impressive camerawork and editing. This sequence is a kaleidoscope of closeups, quick zooms, rapid cuts, and off-kilter angles that make the entire thing feel like you’re actually looking into somebody’s nightmares. I tend to throw around the phrase “fever dream” quite a bit, but that’s really the only way you can describe this sequence. What’s especially well done is the way the two characters are framed throughout this sequence: Sam feels small and powerless, especially in the overhead shot of him struggling to get his bedroom door open. Meanwhile, the clown is often framed in a way that makes him fill the screen—which made five-year-old me think he was about to burst out of my television screen and get me next.

But that third act…that third act is still one of the scariest things I’ve ever seen, and I can understand why it scared the hell out of five-year-old me. Seeing it now, after searching on and off for the better part of my life, brings with it a sense of closure—a part of me can breathe a little easier now, having met my childhood nightmare on its own terms and coming out the other side (plus, it’s good to know that I actually witnessed it and it wasn’t just something conjured up from some weird corner of my five-year-old brain).

But the real power of this episode is one that is special to me. It was the first step that I ever took into horror (however unintentional that step might have been), and the Crimson Clown will forever be my monster—the one that burrowed deep into my brain and refused to let go at such a formative age. And my journey to find and confront this source of childhood terror somehow wound up becoming a lifelong love of all things horror. Without him, I don’t know that I would have even wound up finding my way to writing for this site and meeting all the weird, wonderful people who’ve given me free rein to write about whatever happens to come around and lodge itself into my mind.

In short, “The Tale of the Crimson Clown” is, truly, how I became a Horror Obsessive.