We are about to embark on the most horrifying season of the year: the Christmas shopping season. I know you were likely thinking Halloween, aka Spooky Season, was the frontrunner in that department, but, unfortunately, nothing looks more like a hellish landscape to me than shopping malls without parking spaces and an endless cavalcade of people rushing from one store to the next. And the kick-off to the whole thing gets earlier and earlier every year. Shoppers are already scrolling through thousands of deals on their devices, locking down those hot deals before this coming Friday. But we all know, if you’re in the market for something ridiculous, like a 4K smart television for two hundred dollars, you have to make your way into a store on Black Friday and hope you’re one of the lucky few who gets one.

Let’s face it, the day after Thanksgiving sucks for retail workers. Hell, for many, Thanksgiving itself isn’t much better. Ken (Devon Sawa) picks up Chris (Ryan Lee), and the two head into work to spruce up the corporate toy store they work at before the turkey has even gone cold. Don’t feel too bad, though, in true corporate fashion, the company sent them a soulless sheet cake from a chain grocery store to make up for it.

The store is full of characters that we meet rather quickly, though remain more memorable than most ensemble cast set-ups. Luckily, the film’s script utilizes personality as much as diversity, helping to round characters out with quirks so you’re not asking, “Who’s that?” after a few minutes. There’s Anita (Celeste Oliva), the corporate shill who wins the monthly employee of the month accolade. Ruth (Ellen Colton), the old obdurate retired woman with dated social views. Archie (Michael Jai White), the rugged handyman. Marnie (Ivana Baquero), the down to Earth cool girl. Emmet (Louie Kurtzman), the new guy. Brian (Stephen Peck), the assistant manager. And the oblivious store manager Jonathan (Bruce Campbell).

The cast is phenomenal. Devon Sawa (Chucky, Final Destination) leads admirably while Bruce Campbell (Evil Dead) steals scenes the way only Bruce Campbell can. However, Michael Jai White (The Toxic Avenger: Part II and III) is truly electrifying as the resident toy store badass. His ferocious takedowns had me excited to see him back on screen again. The rest of the cast is also extremely talented as they dive headfirst into their hyperbolic roles. While you’re certainly waiting for the horror veterans to return, Black Friday turns your craving for them into an almost passing of the torch scheme the same way that retail jobs are often handed down to younger people.

Black Friday wastes no time getting into the plot, providing viewers with a cold open showing another store nearby being hit by a meteorite and shoppers outside collectively rushing the store’s windows to pound on the glass. With eerie poignancy, the film isn’t very subtle in making its point. The store’s arriving shoppers look like zombified consumers before we ever get to see them up close. The likeness isn’t much different from your classic zombie horror film when they are revealed to us: flesh peeling faces, dead eyes, and the straight for the throat approach of your typical zed. However, the makeup effects in the film evolve over the course of eighty-four minutes, and they are undeniably good. Long claw-like fingernails, the mandible and top row of teeth that protrude the flesh, and a web-like ovipositor that makes this creature unmistakably Alien.

Shortly after the store’s doors open and the painstaking holiday tradition commences, Chris, the germaphobe, is sent to clean up vomit in one of the aisles only to get attacked by a couple of the customers. The store is soon overrun with hordes of violent shoppers looking to assimilate as many people as possible to their collective alien cause. This is where I felt the movie was doing a great job. We’ve all seen articles about the violence that occurs during Holiday shopping, especially on Black Friday. People getting trampled, workers being attacked, and customer fights over toys and electronics. The scenes are extreme, but the exaggeration is gratifying given the imagery we’ve seen in reality.  Even as the film continues and the toy store workers find the aliens building a glowing and pulsating alien structure, feeding it with both people and goods from the store, there are obvious ideas about consumerism at play.

While Black Friday has a good amount of fun with just its horror premise, it still brings a few hearty laughs based on the nature of the day itself. Andy Greskoviak has written a dynamic script full of situational comedy and satirical musings. One of the funnier jokes that keeps coming back to me is the silliness of the Dour Dennis teddy bear that is seen throughout the film. Dour Dennis is an apathetically depressed toy that gets recalled right at the start of the film but makes a few appearances while employees hideout in the backroom. Both scenarios speak to the nature of holiday depression and the anxiety felt in dealing with the public on an absurdly stressful day.

The end of the film is a lot muddier, but that’s not to say it isn’t entertaining. Black Friday is wickedly entertaining, but the ending feels rushed and unsure of itself in some key climactic sequences, making the conclusion less grandiose than it deserves. The film’s final moments hold considerable surprises, which, in a lot of ways, reminded me of the end of Pierce Berolzeheimer’s Crabs!, which was released earlier this year at Arrow Fright Fest. The creature that rises in Black Friday looks like a cross between Godzilla, Ivan Ooze from Mighty Morphin Power Rangers: The Movie, and maybe a little Society and Clive Barker thrown in for good measure. 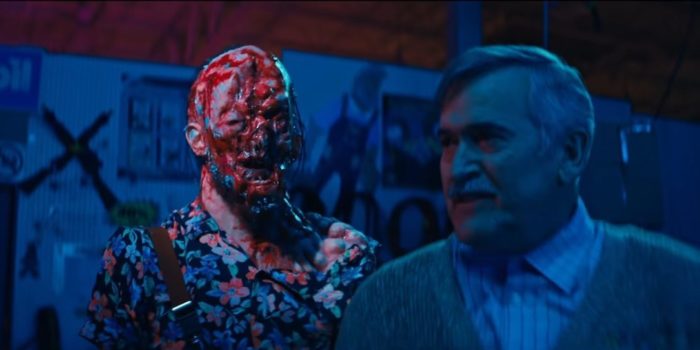 Director Casey Tebo provides good pacing, a couple of good gags, and situational satire to help make Black Friday an enjoyable horror-comedy. Fans of Fall Out Boy’s Patrick Stump will be thrilled to hear his film score as well, though expectations should be managed as it is not a lot of loud guitars with catchy hooks.

Overall, Black Friday is a grotesquely fun horror film that serves as a suitable anti-consumerist metaphor, an even better divergent holiday film, and a wonderful nod to the horror films of Sam Raimi. The first appearances of the alien creatures serve as an homage to Evil Dead’s deadites, while scenes of blood and viscera spewing into the characters’ open eyes and mouths are reminiscent of the disgust audiences felt in Drag Me to Hell. Also, nothing says Sam Raimi quite like having Bruce Campbell involved.

The story’s central message gets a little fuzzy as we strut into the final scenes, which consists of being kind and patient to workers who are daydreaming of a scenario where they can treat you how you treat them. Still, Black Friday is a breezy good time for the most part.