I don’t know much about making movies, but I suspect that one of the most difficult things about making horror films has to be finding the perfect balance between explaining your monster and maintaining a sense of mystery. If you pull back the curtain too much, you’ll kill any interest your audience may have had, but if you play your cards too close to the chest, you won’t hook them in at all. It’s a cinematic Charybdis and Scylla that will haunt horror filmmakers ’til the end of time, but I’m happy to report that I’ve found a movie that walks this thin line just about perfectly: The Feast.

Directed by Lee Haven Jones, The Feast stars Annes Elwy, Nia Roberts, Julian Lewis Jones, Siôn Alun Davies, Steffan Cennydd, Rhodri Meilir, and Lisa Palfrey. It’s about a rich family that is hosting a dinner party for some very important guests, and they’ve hired a young woman named Cadi to help prepare it and be their waitress for the evening. Right when Cadi arrives, things begin to go a bit awry, and by the end of the night, all hell will break loose.

The Feast is a super slow burn, so if you want your movies to be all horror all the time, this is not the film for you. But if you’re a fan of atmospheric stories that start out slow and then subtly increase the horror bit by bit, this is going to be right up your alley. The movie is about an hour and a half long, and for the first hour or so, you’re not entirely sure what’s going on. Sure, you understand that this rich family is hosting a dinner party, and you get a feel for who the different characters are, but there’s a sense of mystery that pervades this part of the film and casts its shadow over just about everything that happens.

For starters, Cadi isn’t the family’s usual waitress, so right off the bat, you get the feeling that something might be a bit off about her. Secondly, as I said before, things start going wrong immediately after she arrives. At first, you might not even notice it, but it’ll become clear as day soon enough. You’re not entirely sure how she’s doing it (or if it’s really even her who’s doing it!), but bad things seem to happen everywhere she goes.

Thirdly, the character of Cadi herself just doesn’t feel right. She’s very shy and quiet, and actress Annes Elwy imbues her with an intriguing combination of curiosity and aloofness that makes it impossible to pin the character down. You can’t really decide if she’s just awkward or if there’s something more sinister going on, and if it’s the latter, you have no idea what she’s actually trying to accomplish or how she plans to do it.

All of these elements work together to create a captivating mystery that keeps your eyes glued to the screen from beginning to end. You just have to know what Cadi’s deal is, so even when nothing particularly interesting is happening on screen at the moment, you simply can’t look away. You begin to ponder her every move to find some answers, and when The Feast refuses to give them to you, it just makes you want them even more.

Then, at about the hour mark, things start to get gruesome, and you know without a doubt that you’re in full-on horror territory. However, even then, the film still maintains its slow pace. You still only get bits and pieces of horror interspersed with more dramatic scenes, so while there were plenty of times when I cringed (in a good way) or covered my mouth and said things I probably shouldn’t repeat here, the movie never goes completely bonkers the way, say, Hereditary does. 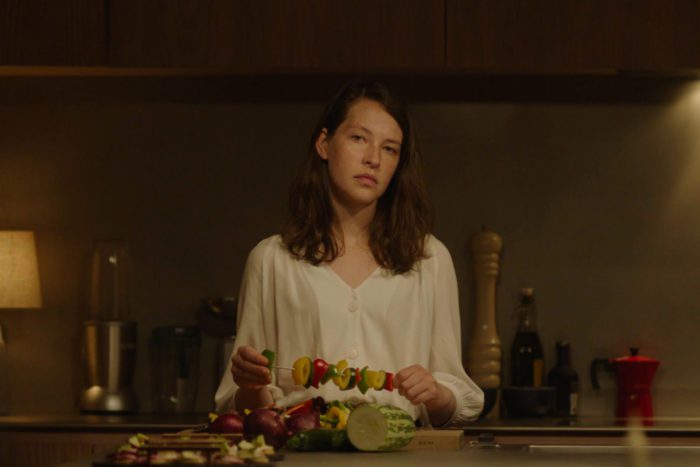 Along similar lines, when The Feast finally pulls back the curtain and explains what exactly is going on, it only gives you the bare minimum. It doesn’t reveal an iota more than you absolutely need to know to make the story work, and it’s perfect. I obviously won’t spoil it for you, but I will say that this seems like the kind of mythology that would definitely be ruined if you knew more about it. The mystery is the best part of it, so the film is right to give you as little information as possible.

After that big reveal, we get the blood-soaked finale we’ve been waiting for, and in my opinion, it’s more than worth the long wait. It gets pretty gory at times, but it never goes so far over the top that the story becomes something it’s not. Instead, The Feast finds the perfect balance here yet again, so it feels like the inevitable conclusion the movie has been building towards all along.

As far as flaws go, I have to be honest, there wasn’t really anything here that I didn’t like. Maybe I’d come up with something if I sat down and really thought about it, but right now, I don’t have anything negative to say about this film. The Feast is simply one of the best horror movies I’ve seen all year—it even cracked my top 10!). So if you’re a fan of slow-burn Lovecraftian horror, I highly recommend giving this one a shot. You won’t regret it.

The Feast will come out in limited theaters and on VOD platforms on November 19.