Dolls are quite a common phobia…or, at least, a common thing that creeps people out. Dolls are also a common love, from kids and kids at heart who play with them, to parents who buy them, to collectors. This Behind the Monsters episode starts with this collective obsession and fascination with dolls as a jumping-off point to musings from various people on how in the 1980s, in the words of Brian Collins, “the effects had finally caught up to the imagination,” which made the possibilities to tell stories about, for example, killer dolls, wide open. Enter Chucky.

Rather than covering and discussing the films in general, Behind the Monsters zeroes its focus in on just that: the monsters. Each episode takes a look at a specific horror villain—their history and origins, how they develop in their films over time, how they influence pop culture, fans, and even the future of the character. 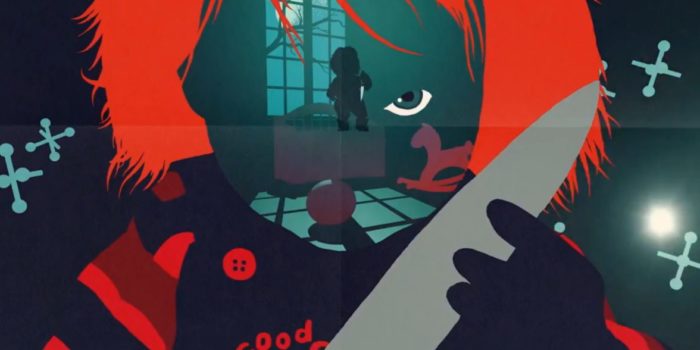 After the title sequence, Don Mancini kicks off the discussion by talking about his interest in taking a killer doll and making him into a character with dialogue, onscreen action, a character arc, and, ultimately, a central, active role in the story. The behind-the-scenes info from Don Mancini about the Child’s Play script’s origin and how he described the character so thoroughly in the script under advice from a lawyer friend who recommended it in case of merchandising is all great to listen to. Throughout the episode, Mancini gives insight into the character, the “whys” and “hows” behind the franchise’s twists and turns, the character’s impact, and more.

Mancini’s unique insight makes sense, as he’s not only Chucky’s creator but also the writer or co-writer of every Chucky film, director of three, and the creator of the Chucky Syfy/USA Network TV series that just premiered in October 2021.

This episode does pay tribute to a few previous examples of sinister dolls from the 1940s through the ’70s, establishing the history of and public fascination with the “killer doll” idea, and then quickly segues into how all of those factors set the stage for Chucky to make his entrance with the support of 1980s animatronics and puppetry.

Although Don Mancini is the originator of the idea and responsible for much of the direction the franchise has taken, David Kirschner came up with the idea of the voodoo ceremony that started it all by transferring Charles Lee Ray’s soul into Chucky’s doll body. It’s fun to hear the origins of Chucky’s origin story: Mancini’s original idea was Andy doing a “blood brothers”-style ritual with Chucky.

Hearing Brad Dourif’s process of finding and establishing the character of Chucky, the character he’s played since the first Child’s Play (1988) and still plays today, is also a great look into how much goes into a voiceover performance. The episode even shows footage of Dourif rehearsing with the cast on his knees, fully in character as Chucky, vocally as well as physically.

This 32-minute episode moves lightning-fast through the Chucky franchise, including the 2019 remake and the Syfy/USA Network TV series, Chucky. (This author has been enjoying the Chucky series so far.) Some of the smaller tidbits work very well in this format: finding out about Chucky’s connection to the Corky doll and that Catherine Hicks (Karen Barclay in Child’s Play) and Kevin Yagher (designer of the Chucky doll) had a mutual crush during filming and later got married are great little nuggets to drop in and then hop back to Chucky.

Behind the Monsters interviews not only those who work on the films featured but also the creatives from other horror films and other horror media who are fans. This outside lens offers a different perspective than that coming from those “on the inside”: these are the people who grew up watching these monsters and were influenced by them. While films that are deeper dives into behind-the-scenes stories or making-of processes are fascinating on their own and give the perspective of the people who put in the work to make what we love, when those who saw and were influenced and inspired by the finished work are included, it gives the proceedings an extra jolt of excitement.

Everyone gets so excited talking about Chucky (even those who are vocal about their dislike for him) that you may find yourself wishing the episode were longer so we could take a more in-depth look at his character. Still, what we get is a great overview with numerous points made that can easily be dug into after the episode ends.

Anya Stanley discusses several distinct aspects of Chucky’s character that are even more unique when packaged together: his humor’s ever-present, whether he’s trying to kill a victim or not. Even if someone doesn’t find Chucky as scary as someone like Michael Myers, they can still find him entertaining because he’s funny. His humor’s sharply mean-spirited, which, combined with his small stature, makes a memorable character that’s fun to watch and laugh with.

Vanessa Guerrero gives really great insight from a fan’s perspective into Chucky’s character journey. First of all, the fact that he has a journey as a character developing across multiple movies is unique in horror, particularly for villains, and especially for villains who are villains from the very beginning. Plenty of male horror villains take (or try to take) brides, but how many are already established characters who create their own bride, have the relationship last beyond one movie, and then have a kid who’s genderfluid and grow to be okay with it? Even for a franchise that revolves around a doll possessed by the soul of a serial killer who did so via spontaneous voodoo ceremony, that’s a lot of plot.

Guerrero also informs anyone who didn’t know that Chucky and Tiffany’s child, Glen/Glenda, is a reference to the Ed Wood-directed public domain film, Glen or Glenda? (1953), showing the definite intention to the discussion Seed of Chucky (2004) has about gender.

It’s nice that this episode gives credit to Mancini for being the driving force behind the Chucky franchise, from creating it to pushing it to grow and evolve. The sequels took a turn for the camp, and then, Curse of Chucky (2013) brought the story back to a horror setting, this time with a gothic feel thrown in for good measure. Now, Chucky’s even taking on horror TV with his new self-titled series, and is being used not just as a character, but, in Mancini’s words, a metaphor for bullying.

Ultimately, this episode feels like something fun for people who’ve seen many Chucky movies and are interested in the character himself. You get some behind-the-scenes tidbits sprinkled in, a glance over the history of the Chucky franchise so far, and a peek into the future. Watching people involved in the franchise and fans alike show equal excitement for Chucky is infectious, and with a TV show currently airing that’s promised to tie into all of the films so far, the future’s looking up for Chucky…and not just because of his height.

More From: Behind the Monsters