Five friends spend a night in the woods, away from their usual haunts, and wake up with fangs. Not only that, but the shaman who had been hired to introduce them to the “forces of nature” is dead nearby. Dead & Beautiful, written and directed by David Verbeek, is all about how they each respond to this apparent turn of fate, and the various ways in which it comes between them.

These five friends are not ordinary folk, even before apparently turning into vampires: Mason (Gijs Blom), Bin-Ray (Philip Juan), Anastasia (Anna Marchenko), Alexander (Yen Tsao) and Lulu (Aviis Zhong) all come from the wealthiest of families, with fortunes estimated in the billions. They will form the “new generation of wealth” who wish to do better than their parents, and in the meantime, they are painfully bored; their little group feels more like a support group than a circle of friends at times, as though they are the only people who will understand each other’s lives and provide some validation. But now, it looks like at last, they have some excitement—not just in terms of a novelty and a thrill but an intellectual and emotional challenge.

Dead & Beautiful is not a film with a complex plot, but it is rather contemplative instead. What would you do if you suspected you (and your friends) had become a vampire? Would you clumsily investigate your new traits (like Bin-Ray), recklessly toy with the hoi polloi (like Alex), or open up to your online followers about your new identity (like Anastasia)? These five are quite different people, and it seems to me they have little in common apart from their wealth, and so it’s natural that however any one person responds to their change, they run the risk of drifting away from the others. Despite all that potential for depth, though, these choices are simply sampled briefly, not really explored.

The cast is utterly beautiful and rarely called upon to act much, perhaps apart from Zhong, whose character has the clearest arc of discovery to go through. Most of them spend the film’s duration with empty, superior facial expressions, or posing moodily. Does this require acting talent or does it accommodate those with little? These people could easily populate advertisements for high-class airlines, or sophisticated music videos, and when they spend a night out on the town, there is a strong sense that they don’t know how to belong there. It’s no surprise if they don’t care about other people, but is that any different to before their change? 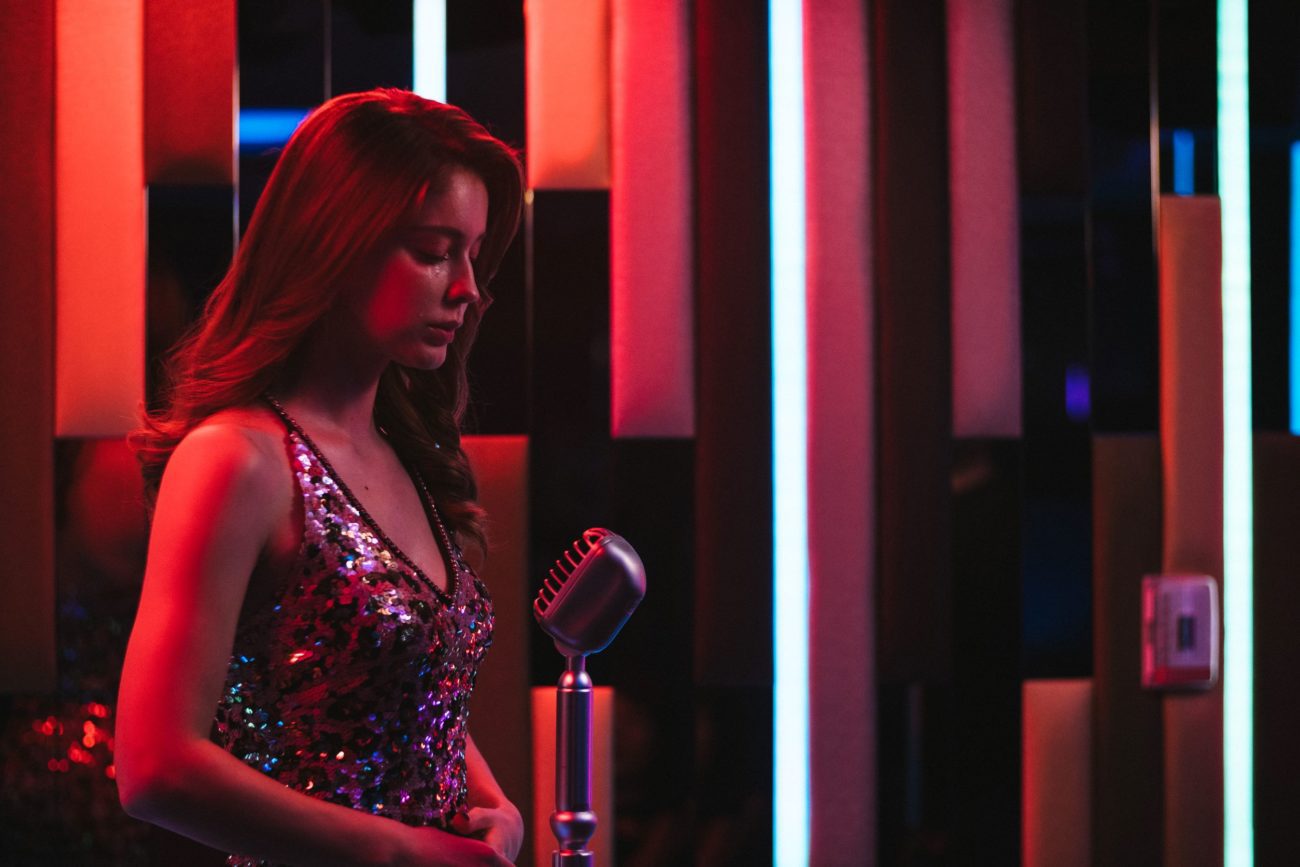 If the characters seem to have been plucked from music videos or commercials, with shallow writing and shallow lives, the same can also be said for Dead & Beautiful’s visual style. So much of it is made up of neon, glitter, and polish; with more gritty or down-to-Earth moments added very briefly as if to recapture the viewer’s attention with carefully placed symmetry. Just watching this film is a sumptuous experience, though, like visiting a high-quality jewelry store. Jasper Wolf’s cinematography strokes eye candy and décor alike, giving the film an almost Giallo-style lushness.

Considering Dead & Beautiful covers such profound topics as consequences, the influence of wealth, and identity, it’s quite notable just how superficial the whole thing feels. I know I’ve referred to the characters’ shallowness a few times, but this is essentially because it feels like the overall mood of the film. I don’t mean it in a derogatory way, but rather that it is deliberately done in order to make a suggestion about the ultra-wealthy set: there is little substance to these people, even when they are given the opportunity to take their lives in a new direction. Perhaps this is why the brief hints at the back story in a couple of cases are left unexplored: there really is nothing there when the lid is lifted. 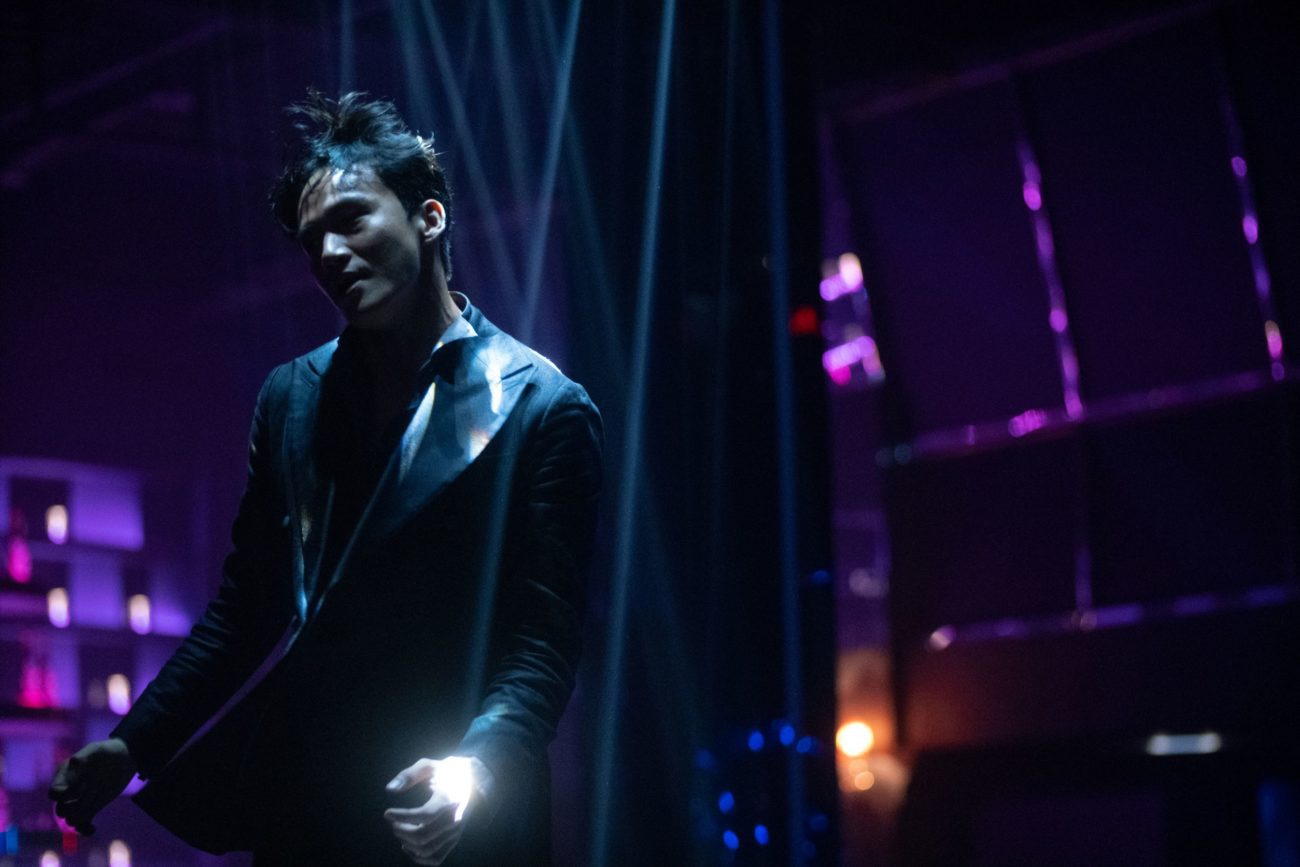 Anyway, this might sound equally shallow, but what I liked most about Dead & Beautiful was Rutger Reinders’ music; indeed, I’m listening to the soundtrack while writing this article. It is a contemporary electronic score, but not “just another” such work, distinctly different from, say, Pilotpriest’s music behind Come True, and it fills in some of the substance of the film that the people leave out.

Dead & Beautiful is worth watching for a very original perspective on the vampire model, commenting on and then dismissing tropes while also following a rarely observed demographic trying to figure out how and whether to adjust. It’s made by a largely Dutch team in Taiwan, and the language combines Mandarin with English in a way that feels natural for the cosmopolitan jet set. Watch it late at night with a glass of wine that helps you slip into their rhinestone shoes for a time: you might be able to see what life can be like for the mega-rich, but it’s unlikely to make you feel much.

Dead & Beautiful is available exclusively on Shudder from 4 November 2021.