At the close of dusk. Night sets on the road leading a couple to their newly inherited property in the German countryside. The couple does not seem to be getting along. The husband, Dieter (Frederik von Lüttichau), is angry at rowdy children at a rest stop, outwardly instilling his contempt in his adjunct satisfaction that the two don’t have children. At the same time, his wife, Margot (Luisa Taraz), wistfully denotes how “we” doesn’t seem to take precedence in this one-sided conversation. Arriving at an old castle estate in the middle of nowhere, they’re forced to stay the night, but something lurks within the castle. At first, we sense the evil lurking in Dawn Breaks Behind the Eyes is vampiric because of the coffin shown and the face that appears over it, but the monster to be feared makes itself known through the husband’s overbearing control of his wife. When dawn approaches, neither wants to leave, but for frightfully different reasons.

With a rich, baroque atmosphere in place, the film leans into the silence between the couple. What isn’t being discussed has more bearing on mood than what the characters are saying to each other. Dawn Breaks Behind the Eyes becomes unnerving right away, with Margot alluding to chaining her husband up in the basement versus securing a divorce, followed by Dieter’s inclination to physically whip her into a submissive state. This marriage has become a prison for Margot as Dieter feels she is his possession to keep. A “flower in the bushes,” as he says, a beautiful thing yearning for sunlight kept shrouded in darkness until it withers and dies. A well-written metaphor for an oppressive marriage, if there ever was one. 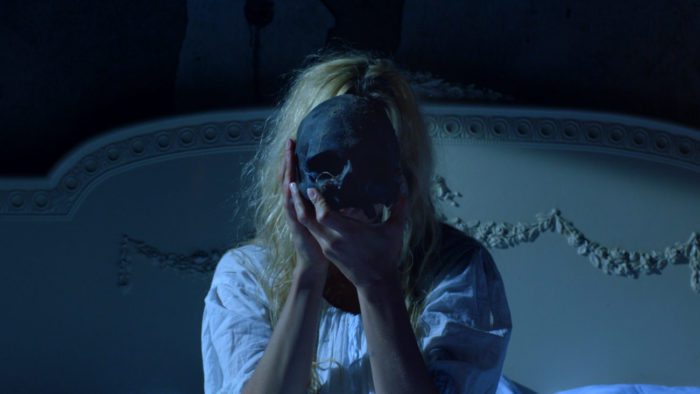 Margot and Dieter’s story soon comes to an end in a display of wild chaos and a scene rivaling Sam Ashurst’s A Little More Flesh, sure to make the men in the audience realize their own fragility. Like 2020’s Black Bear, Dawn Breaks Behind the Eyes transitions between a movie being filmed and the cast and crew members personifying those characters off-screen. Eva (Anna Platen), the screenwriter, is married to Gregor (Jeff Wilbusch), the director, who disregards everything up to and including her presence on set. Eva has maintained that Gregor’s ending doesn’t fit the themes set up in the narrative, but her dispute falls on deaf ears because Gregor’s ego is fueled by the cast and crew members telling him of his absolute genius. The cast and crew cut loose after the final shot is in the can, and everyone seems to partake in the drugs and alcohol provided for the wrap party. While high, Gregor begins to become more and more insecure about his work. Still, he considers his wife overly critical in her concerns about the film’s conclusion, giving Gregor cause to rebuild his narcissistic pride elsewhere.

I had seen some reviews saying that Dawn Breaks Behind the Eyes draws a lot of inspiration from Mario Bava, especially The Whip and The Body, so I made sure to take in the film before writing my review. The Whip and the Body, about a woman haunted by her masochistic ex-lover who returns from the dead to claim her for all eternity, certainly sets a layered template for Dawn Breaks Behind the Eyes to work from. The film excellently filters itself through Bava’s film, with many parallels in both the production’s characters Margot and Dieter and filmmakers Eva and Gregor. Dieter is shown whipping his insubordinate wife while Eva and Gregor’s final scene in the film provides the allegory of vow-laden eternity with someone you both love and despise. Add in the set design, music, and exquisite ’70s production values, and the film could easily be mistaken for an established Giallo, right down to the cameras and color palettes.

Bava wasn’t the only reference to be noticed. Some scenes featuring hints of Suspiria and Gaspar Noe‘s Climax and the gothic romanticism of Jarmusch’s The Only Lovers Left Alive, though told in opposition to that particular film’s wry emotional resonance. Dawn Breaks Behind the Eyes seeks to evoke the depressing aspects of feeling alone in a relationship where The Only Lovers Left Alive finds hope. 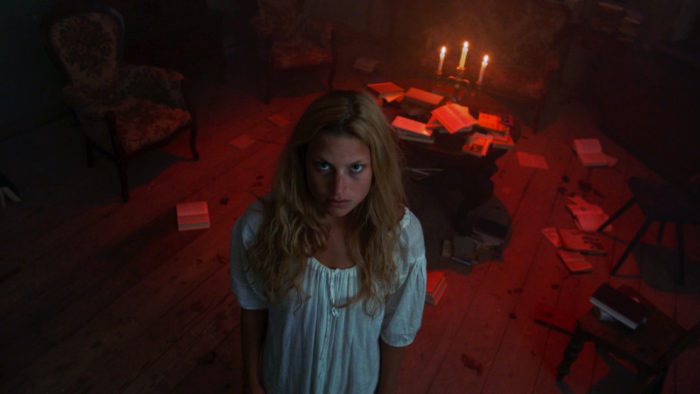 A dread-inducing, meta Scenes From A Marriage, Dawn Breaks Behind the Eyes is a portrait of a marriage in crisis that uses horror elements to craft a Bergman-style story of relationship woes. Eva is pouring her heart out through the script pages of Gregor’s movie, telling him exactly how she feels treated in their relationship. With art imitating life, he remains aloof to her honesty, changing her ending and amassing ego-inflating praise in the process. The film’s ending is subtle, but it’s uniquely satisfying as the movie suggests a repeating pattern for the couple and Eva, finally realizing she’ll never be able to receive the kind of love she deserves in their situation. It’s the ending she likely wrote for the film before Gregor changed it, but it’s still extraordinarily beautiful.

Director Kevin Kopacka—who wrote the film with Lili Villányi—shows an eye for detail and patience for the evolving moments between the dialogue and action of the film. The film is a bit of a slow burn, but it’s beautiful and poetic and shows sincere promise for the director’s future. The tension-filled score helps create an auditory time capsule back to the era of synth and strings. The writing is utterly superb, the acting is phenomenal, and the cinematography is flawless. This is an intoxicating film experience you’re likely to carry with you for days to come. In my experience, those are the movies you’re likely to remember and reference again. If you’re a fan of ’70s Italian horror films, do yourself a favor and see Dawn Breaks Behind the Eyes.