It’s not hard to compare Nightstream 2021 official selection Stanleyville to Netflix’s recent hit series Squid Game. Each has its own perspective on a bizarre, dangerous competition where a cast of charismatic characters willingly risk their lives for riches beyond their wildest dreams. Although, in the case of Stanleyville, the prize starts and ends with a “habanero-orange compact sport utility vehicle.” A pretty car, to be sure, but maybe not worth facing potential death for, no matter how enticing “the ferocity of true primal conflict” may sound.

Where Stanleyville really differs, however, is it shows the flaws in its competition right from the start—and that’s to its benefit. Its host, Homunculus (Julian Richings of Wrong Turn and Anything for Jackson), despite his utmost commitment to the contest, is repeatedly corrected by the contestants when he mixes up his own rules. His judgments of winners and losers are totally arbitrary at times, and his slow manner of speech leads the five poor souls who’ve given up all their worldly things to fight for an SUV to make all kinds of mistakes before he’s even finished talking. Of course, everyone else isn’t without their own issues, turning this film into a bit of a satirical live-action cartoon that may not be for everyone, but for those who enjoy offbeat dark comedies where death is on the line, Stanleyville is right up your street.

Co-written and directed by former actor Maxwell McCabe-Lokos in his feature debut, this film revolves around Maria (co-producer Susanne Wuest, who gave me all sorts of feelings from her breakout role in Goodnight Mommy), a woman dissatisfied with her home life and her straitlaced job who’s only offered the chance to compete after she’s thrown away all her worldly possessions and burned them. Soon enough, she finds herself in a warehouse-like building alongside the campy wannabe artist Manny Jumpcannon (Adam Brown), the insecure businessman Andrew Frisbee Jr. (Christian Serritiello), the protein-obsessed pyramid scheme victim Bofill Pancreas (George Tchortov), and the cold-blooded Felicie Arkady (Cara Ricketts), ready to face up to every challenge Homunculus poses to them. As alliances and rules are made and broken, and the body count starts to slowly pile up, Maria doesn’t even seem to care—she’s not in Stanleyville for the habanero-orange compact SUV, she’s here to have a transcendent experience where she climbs beyond the person she used to be. 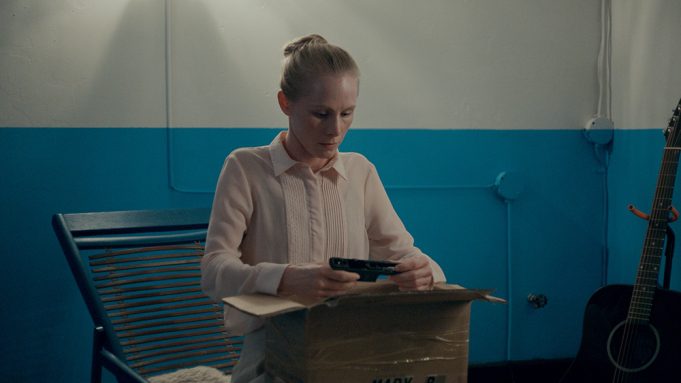 The challenges posed to the five contestants range from simple (blow up and pop the most balloons in one minute) to absolutely impossible (invent and build a telecommunications device in 12 hours) and everything in between. Surreal elements begin to creep in as these challenges play out—is Maria using her telecom device to speak to an alien? Is Homunculus human or something else entirely? Is there even an SUV at the end of all this madness? The script is packed to the brim with unconventional twists and turns, leaving me hard-pressed to figure out how things would play out. There are musical performances, a potentially magical emergency exit, and a metric ton of protein powder. It’s never not interesting, and it manages to keep its lighthearted weirdness even as Stanleyville devolves into Coen-esque violence and people start asphyxiating and losing their ear lobes.

Susanne Wuest’s character is brilliant in this story. At first glance, Maria appears to be a quiet blank slate, but as it became apparent that she didn’t really care about winning as much as someone like Felicie, I started noticing that she was using the competition less as a chance to win a better life and more as a way to obtain spiritual enlightenment. Even as her fellow competitors tear each other to bits to win, she’s the stoic center of it all, refusing to back down from her beliefs about her role in the competition. When Felicie tries to tell her that she has it all wrong, she never listens. I personally wouldn’t look for enlightenment in a warehouse of people with funny names fighting for a shiny new car, but watching Maria step further and further into the role she makes for herself is oddly believable in this impossible comedy.

And the comedy here isn’t a laugh-out-loud gut-buster; rather, it aims for that indie off-kilter feel and often hits the mark. I can see the right people brought to giggles at some of the awkward line deliveries, character moments, and violent shocks to the funny bone. Even the cast members best known for horror (Wuest and Richings come to mind) deliver well-thought-out character performances. We hardly get the smallest glimpse into everyone’s backstory, but through their offbeat performances and comic timing, they all feel fully realized—as much as a live-action cartoon character can be, at the very least. This movie may not have the time or depth of something like Squid Game, but as it digs more into comedy territory, it doesn’t need to.

Overall, Stanleyville‘s dark comedy bordering on horror isn’t high-energy or over-the-top hilarious, but what it lacks in in-your-face moments, it more than makes up for with its characters and its awkward sense of satire, mashing up several elements that really shouldn’t work together and presenting us with a very entertaining collage of ridiculous and horrific things. It’s certainly worth checking out once it receives its theatrical release this coming winter, especially if you’re a fan of the unexpected and humorous along with your sarcasm.

Looking for more on Nightstream 2021? We’ve got you:

“Nightstream 2021: To The Moon Doesn’t Quite Hit the Mark”