If you ever asked yourself, “What if the classic slasher film Friday the 13th was real?” then Bobby Marinelli’s Death Cast is the answer to that question. Featuring six naïve young actors who sign onto a horror movie without reading their contracts, the film chronicles the process of a hidden director that takes method acting entirely too far. Setting up an extensive array of cameras throughout the location, he places his cast into the real-life hell of being chased, stalked, and murdered deep in the woods at a farmhouse in the middle of nowhere. The cast has no idea they’re walking into a snuff film, and all for the gory glory of having been in a horror movie. The film introduces these six castmates (Lacy Hartselle, Danielle Stratton, Hedy Nasser, Marvin Laviolette, Andres Erickson, and Kyle Swanson) through casting videos and some behind-the-scenes shots as they journey through this documentary-style found-footage film. Surrounded by red flags, the cast’s cell phones are taken, and they’re brought to the set via Uber.

I’ll be honest, when I heard the premise and saw the poster for this film, I had some high expectations. The poster, showing a starlet in a bikini sitting in a director’s chair with a knife in her back, gave the impression that these castmates were literally going to be stabbing each other in the back to secure their place as the survivor of the film. However, that was never the case. I will give the poster credit where it’s due. It’s excellent marketing. However, the result of Death Cast did not meet my initial excitement.

Having been told to start their lines during scene seven inside the farmhouse, the cast arrives at the location and begins their trek to the house, passing an old station wagon along the way. The initial scene reminded me a lot of when the teens reach their destination in The Texas Chain Saw Massacre. For a second, I got the feeling that the film being made in Death Cast was going to be a true-to-life remake, as if the director were copycatting fictional slasher stories for a real-life cosplay of a horror film, like in Mimesis: Night of the Living Dead. In Mimesis, a group of deranged fans makes a movie real by locking unwilling participants in a farmhouse and forcing them to participate in a true-to-life version of the Romero classic. Unfortunately, Death Cast doesn’t get to that point, trading plot for an aimless labyrinth of actors running through on-location sites.

Death Cast isn’t devoid of fun. The satirically unnecessary ’80s dance sequence is an especially high moment, but the film just ends up slightly banal for anyone who’s seen this plotline before. From Halloween: Resurrection to Wrong Turn 2: Dead End, or even as recent as Netflix’s A Classic Horror Story, the story of filming actors through a blood-soaked lens isn’t new territory. So, the film needs something to catch the viewer’s attention to why these people are being filmed and, more importantly, why the viewers should care. We get very little on the backstory of the characters as they enter the rural landscape. We know, two are sleeping together, one hasn’t read the script, and another is a bit of a jerk, but there is nothing to ever make the two-dimensional characters pop.

Okay, fine, maybe you’re thinking that character development isn’t necessary because I’m watching a movie called Death Cast. Conceivably, they could’ve been made to be unlikeable to suffer grotesque and innovative slasher kills that will satisfy my horror bloodlust for vapid reality stars. I wish that I could tell you that’s true, but even the kills are lackluster. There are a couple of scenes that had major potential, one where we witness the first brutal kill of the film with an arrow whizzing past him. The moment doesn’t stir up an unsettling tone where the characters find themselves banding together. It also doesn’t play up the situational comedy, though I still kind of found myself laughing. 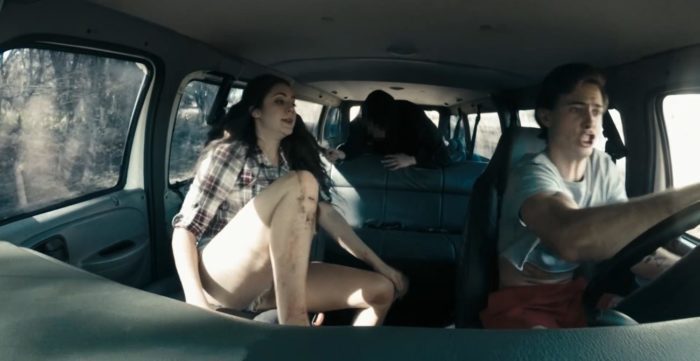 Another moment, where the killer forces two members of the production down a treacherous path filled with buried cinderblocks and old tires, comes after we see a camera showing a truck filled with slasher killers. The viewer gets the sense that one of these stuntmen-killers is being activated after the first gets hurt or worse,  but the film doesn’t tell us. When he leads the two down the path, where his victims trip and hobble through the dangerous landscape, it feels like the creative scare would be to have another stuntman-killer waiting for them—or a good old-fashioned bear trap. All of the members that meet their end in Death Cast do so in non-surprising fashions. And as two-dimensional characters with no effect on our empathy and little scare effect, there’s just nothing altogether satisfying about it.

As far as endings go, I was glad Death Cast didn’t chicken out and become like The Game or the recent Escape Room knock-off Follow Me (aka No Escape). In those films, an incendiary conspiracy unravels to reveal the cast of characters who get killed off throughout the film are a part of the plot against the surviving members and lead them to an afterparty to admit that everyone was acting and no one has been hurt. Death Cast instead makes a point of adhering to its rules, which is an admirable move. Though the ending works for what the film is trying to accomplish, it misses a crucial moment by not capturing a confrontation with the reclusive director of the film. A moment presented like that could have defined the movie by saying something about the unsafe working conditions found in the film industry. Hazardous and toxic film projects have been documented on film sets for a long time, from The Exorcist, The Twilight Zone, and The Shining. To end the film, Death Cast subtly suggests the resilience of actors surviving nightmare film productions. Still, it doesn’t extend itself to its potential, where it could do more to promote conversations about subversive directing traits or how idealistic young actors find themselves in these kinds of productions. 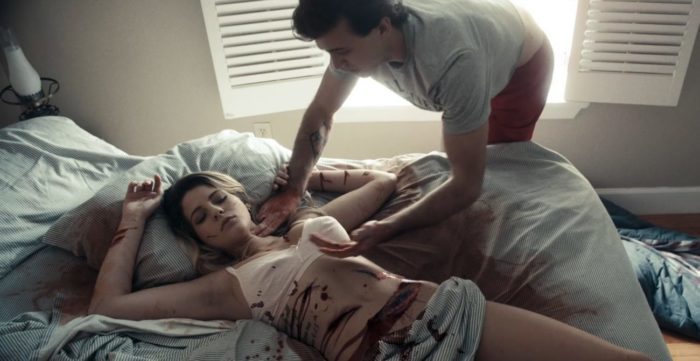 Death Cast is Bobby Marinelli’s debut writing and directing a feature-length presentation, something slightly different considering the amount of reality entertainment Marinelli’s worn various hats for in his filmography. Though he may be apt in the world of television reality stars, I fear that audiences are not going to enjoy the shallow perceptions of actors planted within that universe. In summation, Death Cast wasn’t for me. I liked a bit of the setup, the pace of the film is quite good, and I somewhat enjoyed its conclusion, but I felt it lacked key development elements that could have given it an edge in a subgenre boiling over with similar stories.