I absolutely adore October. From the gentle rustle of wind blowing through the leaves to the public’s embrace of the spookier side of life, it’s my favorite time of the year beyond a shadow of a doubt. And as such, I love stories of any kind that take place in Autumn and love them even more if they’re specifically about Halloween or themed around the holiday. It’s why I love Kealan Patrick Burke’s collection Dead Leaves. While not every story is as good as the others, as a whole, it captures what is so damn fun about this time of year and contains some excellent examples of what can be done with short fiction to boot.

The collection opens with “Andromeda,” a cautionary tale about our reliance on technology and how it might negatively impact us as a society. It’s essentially a cosmic horror story about people going off the deep end when mysterious things start happening in the night sky, and it’s all told from protagonist Hannah’s point of view. The thing is that she receives all of her information through her phone, leading to a weird sense of disconnect from the very real threat surrounding her. It’s a fun, creepy story to open up on and is followed immediately by a classically Twilight Zone-esque tale. 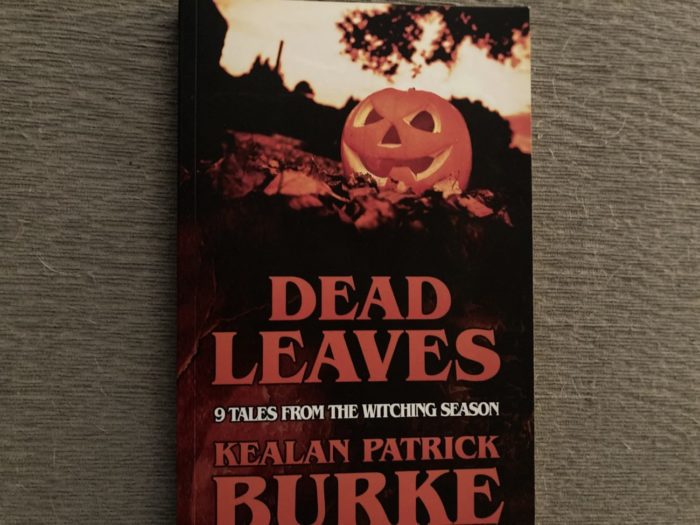 “Someone to Carve the Pumpkins” almost feels like a grown-up R.L. Stine story. It’s nothing that hasn’t been done before but is executed with precision and disturbing grace. It’s a very brief yarn about two boys checking out the haunt on their street. They stand across the road from a rundown house where an old woman sits, and they debate with one another whether or not she’s a ghost. It’s memorable despite its brief length (about six pages total) and is not the last outstanding piece of short fiction in the collection.

“Haven” sees Burke experiment with surrealism in a way, with it concerning a young boy trying to find shelter from the problems in his life. The thing is that the story gets weirder and weirder as it goes on, and it is one of the less memorable parts of the collection. A couple of stories later sees another less-than-memorable tale with “Tonight the Moon is Ours.” This is probably my least favorite in the whole book, as it’s not particularly scary and doesn’t really go anywhere super interesting. It’s about a young boy meeting a young girl in the night. To say much more would be to spoil it, but it’s not my favorite.

This is immediately followed up by “The Toll,” which feels like a sort of Gothic throwback in many ways. It’s about a rich man waking up in a very bad predicament: he’s been buried alive, and the story is largely about him working through the list of potential suspects. It turns out that he’s led a less than stellar life, with him largely viewing people as tools, a means to an end for his own personal gain. It’s a classic cautionary tale, one that sees Burke once again mixing familiar ingredients in an interesting way, even if the outcome isn’t all that satisfying.

“Will You Tell Them I Died Quietly?,” apart from having one of the most awesome titles for a short story that I’ve ever heard, is a fun mixture of surrealism and folk horror. It’s about a man named Elias returning to his hometown since a relative is going to pass soon and the ramifications of the town’s traditions and history. It’s chilling and creepy, much like the next story.

“The Tradition” is such a classically themed haunted house story. It has absolutely nothing new but is executed so well that it’s among my favorite shorts of all time. It’s a haunted house yarn told from the perspective of the one haunting the house and is filled with melancholy and dread. I’ll be honest: ghost stories and haunted houses need to be executed in a very specific way to appeal to me personally, but I adore “The Tradition.” It’s unnerving and subtle, but also quite scary. It really captures the fall atmosphere it needs to and is one of the collection’s highlights.

The final tale, but not the last one I’m going to talk about, is “The One Time of the Year.” It is the thesis statement of this whole collection, a celebration of what makes Halloween so special and a moving tale about getting past grief. It’s about an old man and his dog waiting on the porch of his house on Halloween night. He has a shotgun for reasons that aren’t initially clear. It turns out that every single year he’s visited by pumpkin-headed specters, and he must defend himself against them.

Rather than descending into mayhem like the final story in something like Trick R Treat, “The One Time of the Year” is instead a meditation on the power of horror itself. I don’t want to give too much away, as it’s rather brief (about nine pages or so), but essentially it’s about the old man trying to enjoy the rest of his time on Earth that he has. I can think of so many ways that the story could have gone that would have made it less impactful; it could have descended into shlock, with him fighting the pumpkin heads in a siege-like situation; it could have ended on a dour note about the futility of fighting time itself. Instead, it ends bittersweetly. Its message is about how holidays in general are times of reflection and memorialization, and I can’t think of a better way to end the collection than on something so creepy yet impactful.

But there’s one last story I haven’t discussed yet. The fourth and absolute best story in the collection is a brief, five-page tale called “How the Night Receives Them.” I say this without hyperbole: this is one of my favorite horror stories that I’ve ever read of any length. It’s a ghost story about a woman walking down a lonely highway at night. Who she is and why she’s there are initially unclear, and things get even stranger when a man pulls up in a car and begins talking to her. The bulk of the story is this conversation, but Burke adds in plenty of small details so that this setting, this almost purgatorial slice of the road in the middle of the night, is always present in the reader’s mind.

As I said above, paranormal horror about haunted houses and ghosts is very hit or miss with me, and that’s largely a me thing. I can recognize when a ghost story is well crafted even when I don’t particularly enjoy it, but for me, “How the Night Receives Them” transcends the subgenre and becomes a powerful study of our actions in life and how we have to live with them. There’s a sense of melancholy so thick in the writing that you can practically cut it with a knife, and the writing has a somber but balanced element to it that doesn’t feel like it’s trying too hard to make you feel something. Instead, Burke simply lays the facts out, shows us these two characters interacting, and lets us come to our own conclusion. It says more about grief and sin in just five pages than most long-form stories do in their run times. It is the crown jewel of this outstanding collection and makes me yearn for the days where an author could become a mega star based solely on their short stories.

Like any short story collection, Dead Leaves has its ups and downs. I think a few of the middle stories aren’t the strongest, but it makes up for it with its high points. In fact, it more than makes up for it. Its high points, “How the Night Receives Them,” “The Tradition,” and “The One Time of the Year” are all outstanding examples of just how affecting a short story can be. The rest are all good seasonal fun, too, and taken as a whole Dead Leaves is fall perfection. Anyone who loves the season as much as I do owes it to themselves to check it out.

Be spooky this Halloween, everyone. Be safe.