Nightstream is a collaborative virtual film festival, started in 2020 as a response to the COVID-19 pandemic. It continues this year and is being presented by the Boston Underground Film Festival, Brooklyn Horror Film Festival, North Bend Film Festival, and The Overlook Film Festival. Proceeds from the festival go to the filmmakers and also to several charities. I highly suggest checking out their website for more info on the event. A variety of films include feature-length productions and shorts are scheduled.

Landlocked sets an interesting premise about a man going to visit his childhood home and exploring his memories through home movies. These are actual VHS tapes from the Owens’ lives. Paul Owen and his brother Mason return to what was once their home, now dilapidated and due for demolition. As they reminisce and explore the now empty rooms, they find a box of videotapes. A third brother, Seth, and their father Jeffery also appear later on.

There’s something equally comforting and unsettling about home movies. They’re such a personal look into a family’s life (I’m reminded of Red Dragon when Ralph Fiennes researches his next victims by watching their VHS tapes). It feels intrusive to view them at all when I’m not involved. There’s also the detachment from the events via the camera itself–a subject that’s been used from the beginning of the found footage genre. The bleeding together of what is and isn’t real is also a trademark, from The Blair Witch Project to the infamous Cannibal Holocaust. Personally, I’m a huge fan of this and think Landlocked does a fantastic job setting a moody, nostalgic atmosphere.

Paul soon leaves but not before trashing the camera, deliberately burying it in the garbage—very suspicious! As Mason picks up the same camera, he sees the old footage through the viewfinder while he stands in the same spot, some 20 odd years later. Naturally, he’s kind of freaked out by this—but also curious. He starts messing around with it, changing the date on the camera’s programming to view different events. Christmas, a soccer game with their Dad, who recently passed. It’s an incredibly simple but well-executed concept. Moving through the house and yard, Mason has a literal window to the past. He views his younger self, his brothers, and his family through carefully thought-out camera angles so that the past matches the present. Thankfully for Mason (and for us), there’s a ton of footage. It seems filmmaking has long been a passion for the Owens. 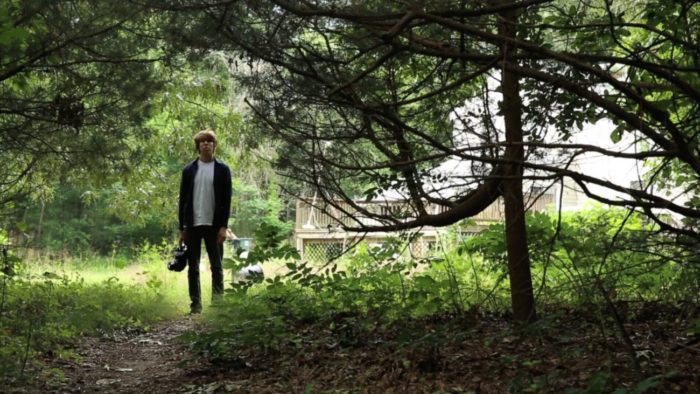 Curiosity soon becomes an obsession, categorically recording “new” footage. I wonder how much of this is true to life…was it a quarantine project to go through these tapes, then the idea for the film evolved from that? It’s definitely one of those films where I’m just as interested in the process behind it as I am in the picture itself. Soon shelves are full of tapes, several TVs set up playing footage. Discarded furniture is set up to hold all the equipment Mason needs. Staring at tiny screens, completely isolated, it gets weirder. Another favourite trope of mine is the ambiguity of what is real and what isn’t. Dreams are another great example of this, and we see Mason waking up on a bare mattress several times, only to immediately return to the camera. I don’t even think we see him eat.

Landlocked answers some questions, leading to more. What would happen if Mason set the date to the present? To see himself just hours earlier? To see his own father’s death? That’s enough to traumatize anyone. It’s probably weird to say this, but I appreciate that Mason ugly cries over this, full-on snot and everything. I don’t feel like movie crying is realistic at all so having it be an incredibly vulnerable moment adds emotional depth to the story.

There’s a couple of great spooky shots, playing with shadows and overlaying footage. A genuinely disturbing character called Dust Man in the credits begins to appear, a flaking, smouldering spectre. A trail of smoke and dust follow his every move, leaving trails, in reality, covering surfaces and getting all up in Mason’s hair. He’s seriously one of the coolest characters I’ve seen in a while. He’d fit right in with modern creepypastas. Since Mason is by himself for the vast majority of the film, there’s not a lot of dialogue besides what’s coming from the video footage. It’s quiet and reflective. If that’s not what you’re looking for in a film then maybe pass this one up, but I know there are many who love this type of lo-fi horror. (One of us, one of us!) Lo-fi horror uses old technology and retro aesthetics as part of the appeal. Generally slowly paced and requiring attentive viewers, it’s been gaining traction over the years with strange youtube series, video games (the Puppet Combo games especially), and the popular V/H/S series of films.

Overall, Landlocked is an impressive project with a deeply personal vibe and a really interesting family bonding experience for the Owens. While this is most assuredly horror, I think it would have been a fun experience creating it. It’s certainly a more involved project than I’ve ever had with my parents—maybe school projects or a complicated jigsaw puzzle at most. “I made this film with my Dad and brothers”…now that’s pretty cool.

Nightstream is an online event taking place from October 7th through the 13th.

Looking for more on Nightstream 2021? We’ve got you:

“Nightstream 2021: To The Moon Doesn’t Quite Hit the Mark”

“Nightstream 2021: The Social Terrors of Stanleyville”