A24 has been killing it this year in the horror department. Saint Maud and The Green Knight are some of my absolute favorite movies of 2021 (in any genre), so when I sat down to watch Lamb, I had high expectations. I felt confident that it was going to continue the studio’s great run, and I’m happy to say that on the whole, I was not disappointed.

Directed by Valdimar Jóhannsson and starring Noomi Rapace, Hilmir Snær Guðnason, Björn Hlynur Haraldsson, and Ingvar E. Sigurðsson, Lamb is all about a childless couple who live on an isolated farm in Iceland. One day, one of their sheep gives birth to a freakish hybrid creature with the head of a lamb and the body of a human baby, and they decide to take it into their home and raise it as their own. At first, the child brings them nothing but bliss, but as the official plot synopsis says, “[t]hey soon face the consequences of defying the will of nature.”

Like we’ve come to expect from A24, Lamb is a very slow burn. It’s even slow for an A24 movie, so it’s going to try your patience like few other films this year. In particular, the first 40 minutes or so crawl along at a pace that would make a snail proud. This part of the film just introduces us to the setting and the characters, but it’s almost entirely devoid of plot. It’s mostly filled with shots of the main couple going about their daily lives and doing normal things like eating, watching TV, and working the farm, and to be honest, I started to get a bit bored with it about halfway through.

The one thing that kept me invested in the story for these first 40 minutes was the mysterious lamb/human hybrid child. Admittedly, you don’t see too much of it, and when you do see it, it doesn’t really do anything other than lying around looking cute, but I found its mere presence super intriguing. I really wanted to learn more about it and see the horrific hijinks that would inevitably ensue, and that was just enough to keep me from checking out entirely. 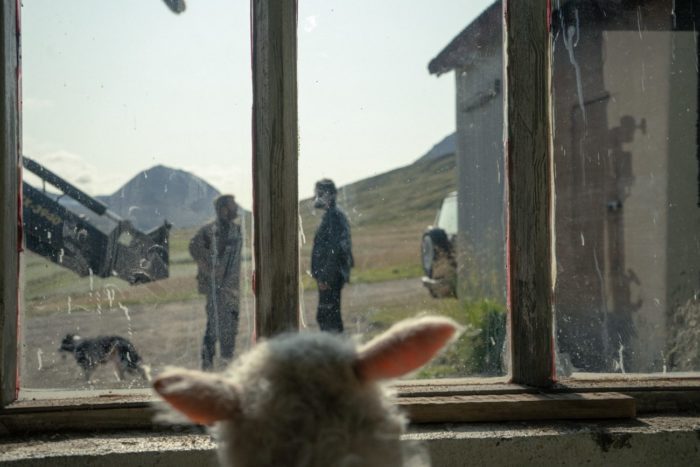 Then, in the second act, Lamb finally picks up the pace a little bit, and we start to get an actual narrative. The film even introduces a side character, and he does a really good job of helping to flesh out the main couple. He forces them to interact with another human being, so their personalities come out a lot more and they become much more sympathetic.

On top of that, this part of the film also fleshes out the hybrid child a bit. Granted, since it has the head of a lamb, it can’t talk, but it acts like a normal human child in just about every other respect. As a result, I began to feel myself becoming attached to the creature, and I couldn’t help but root for it and want it to live happily ever after.

About halfway through the second act is when I really started to like the film. I found myself pretty invested in the characters, and the weird hybrid creature gave me just enough fantasy that I was genuinely hooked. I felt like the film had set up a really good foundation, so I was excited to find out where the story would go next.

And when it finally got to its narrative destination, my jaw just about dropped. Don’t get me wrong, this film never goes completely bonkers the way Hereditary does. It stays pretty slow and understated from beginning to end, so it never becomes an all-out scarefest. In this regard, it’s very similar to Saint Maud. That movie just gave us a few shocking scenes of terror at the end of its otherwise very drama-heavy story, and Lamb does something similar.

I’m obviously not going to spoil anything, but I will say that the finale goes all-in on the fantasy, taking the film’s weird premise and amping it up to 11. It’s utterly bizarre and just horrific enough to justify covering it here on Horror Obsessive, and I absolutely loved it. What’s more, this strange finale also gives Lamb a surprising but very welcome message. It’s not at all what I thought the movie was going for at first, but looking back on the story in hindsight, it makes perfect sense. It’s an important message that we’d all do well to heed, so it gives us some real substance to go along with the crazy fantasy.

All that being said, I can guarantee you that not everybody will feel the same way about the ending as I did. In fact, I’m sure it’s going to be really divisive among fans, and I suspect that your overall assessment of the movie is going to depend in large part on what you think of it. Everything that comes before it is basically just setup for that one moment, so it’s going to color your perception of the entire film for better or for worse.

And since I loved the ending, I really enjoyed Lamb. Granted, it’s not going to be for everyone, so if it doesn’t sound like the kind of movie you’d enjoy, I’d recommend giving it a pass. But if you like weird, slow-burn fantasy-horror, there’s a really good chance that you’ll like this film. While the first act is a bit weak, the rest of the story builds up the characters and the fantasy element enough to make it a really enjoyable watch, and the shocking ending will definitely stick with you long after the credits roll.

Lamb was released in theaters on October 8.