It’s 8 October 2021, and day two of this year’s Grimmfest in Manchester, UK covered a bit of everything: men, women, witches, monsters, gore, and sci-fi. Oh, and if any of them catch your interest, most of them are available (to UK audiences) via Grimmfest’s online edition next week.

Well, Slapface was frankly miles better than I expected, and I’ll put my hand up and say it was probably the pseudo-flippant tone of the title that put me off (sounded kind of “ghostface” for bullies). The film focuses on two brothers, Tom (Mike Manning) and the younger Lucas (August Maturo), who are getting by together since being orphaned in a car accident—kind of coping and kind of not. Neither of them is quite equipped to handle the void their parents have left: Tom drinks a little too much and works only just enough, while Lucas makes friends with the witch living in the nearby woods.

The two young actors are remarkable in their contrasting roles, with all the nuance required in showing how tough it is to handle guilt, bereavement, and those who remain. As well as the grief, Lucas also has to deal with bullies and of course the witch (who is maybe a little more serious about their friendship than he is). The writing and acting combined make these characters extremely sympathetic, and although grief crops up a lot in horror in recent years, this one still feels original precisely because of these two brothers. The other interesting thing about it is the way the supernatural and “real” blend so well (thanks to Tate Steinsiek’s monster effects and Barry J. Neely’s mood-enhancing music) that I could never quite tell if everything on the screen was in Lucas’s head, really happening, or merely symbolic.

This film is definitely worth looking out for when it arrives on Shudder next year, but it is perhaps not one for dog-lovers.

Three young women, Aisha (Alejandra Zaid), Magnea (Jessica Ortiz), and Camila (Alejandra Toussaint), each—separately—wake up in a nightmarish hospital with at least one of their senses out of service. One by one, they are subjected to bizarre and surreal abuse and have to cope with the obstacle of deafness, blindness, or muteness while desperately trying to find a way out. All of this is bookended by an epilogue and a prologue which might provide some context, but whether it is all actually happening or simply a presentation of the frame of mind they are all enduring, I couldn’t say.

Forgiveness is an intense film, with almost constantly droning synth music, flashing lights, and chaotic long takes. The three victims often don’t know who to run from or who they might be able to trust as allies. That said, the pig-faced rapists, the sadistic matron, the gangster type in a leather jacket, and the blood-sucking nurses are pretty obviously unpleasant. I wish I was clearer as to why forgiveness was called for, though there are plenty of religious images throughout the film to indicate a moral message is there to be found somewhere. Forgiveness kept me intrigued throughout, but it was not an easy film to enjoy. 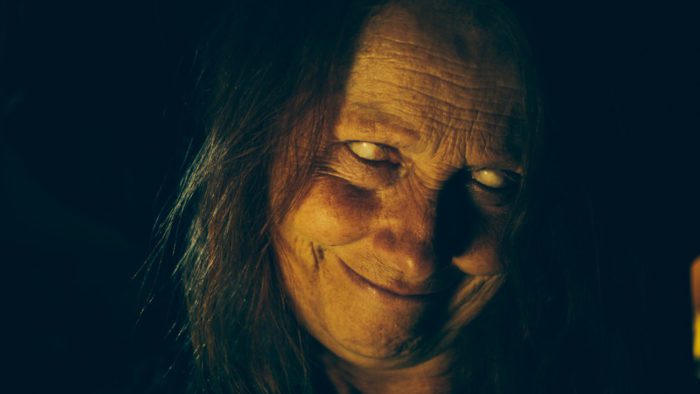 This is a film about—please excuse me—two witches. They are approached as two separate chapters with links that become apparent towards the end. It’s also apparent that there are definitely more than two witches in this story, and there’s a strong indication that there could be future films focusing perhaps on other characters. The first chapter has the witch firmly in the background, and it focuses instead on the effect of her evil eye on nice young couple Paul (Julien Marlon Samani) and Sarah (Belle Adams); the second observes Masha (Rebekah Kennedy) coming into her powers with a vengeance. Two Witches is visually bold, almost garish in parts, with plenty of nastiness and blood in places.

These are indeed nasty witches, taken almost from ancient folklore which is part of every heritage, and thrust into the modern world with varying degrees of comfort. They’re into power, sisterhood, and babies’ blood, and ultimately manipulative characters. Although the film is soaked through with rich horror, tension, and malice, I couldn’t help but wonder who would truly enjoy these tales—perhaps individuals with negative views of women who appreciate seeing those views validated. All the significant characters are female, and the dismissive and insulting comments from the male characters are never addressed. Out of all the female characters, only one of them is even remotely likable. I’ll put my hand up and say that it might have caught one or two of my trigger points, which could have made me a bit more sensitive to these things than strictly called for. Having talked to Tsigaridis and his producer recently, I do understand what they were aiming for. Still, Two Witches looks fab, and that may be more than enough for many fans.

As well as all of the above, Grimmfest also screened