When creating a TV series, one important thing is to either go 100% with each episode or actively weigh out the fantastical moments. Slasher: Flesh and Blood has done a good job of weighing each episode out to give them their respective standout moments, but there was a change with Episode 6 “Face Time.” They blew their load a bit too soon. “Face Time” is such a magnificent and brutal episode that there may be nowhere else to go from there. Now, that’s not to say the show still isn’t great—it is, but they may have jumped the shark. Episode 7, aptly named, “Goldfinger” has some really great moments and starts tying up loose ends, but it’s really hard to get the events of “Face Time” out of my head.

“Goldfinger” follows the drug-filled denouement of “Face Time” with Aphra (Nataliya Rodina) wondrously wandering through the forest after Florida-manning Christy (Paula Brancati). Aphra runs into the Masked Killer, whose identity is soon to be revealed. They walk hand in hand before she is tied up by the killer and BRUTALLY sawn in half. Now we do feel bad for the character, somewhat, but I think it could have been more shocking if the Orphan reveal was saved until after Aphra’s death. Letting us think that the killer is so terrible that they would kill a kid is much scarier (though it could be argued the killer still thought Aphra was a child since they weren’t around for the reveal).

One of the predictions I made early on was a little lovin’ between Liv (Sydney Meyer) and Theo (Alex Ozerov), and boy was it just as weird as I thought it would be. They are standing in the cold room where all the bodies are being held, talking about who they think, respectively, the killer is. Moments later they lock lips and both seem to enjoy it a fair amount. Meanwhile, Vincent (A.J. Simmons) searches the woods for Aphra and unfortunately finds her. He finds a ring that once belonged to Merle (Jefferson Brown) in a pile of her stomach bits and puts it on. This act soon leads to the wild revelation that Grace (Rachael Crawford) and Merle were having relations, that were…approved by Spencer (David Cronenberg)?! Honestly, it threw me for such a loop to learn that the rude, arrogant, power-hungry Spencer was a cu*k. It seemed out of character, but it also did not at the same time.

In a flashback, we are shown a scene where Grace is aiding the ailing wife, Annette (Maria del Mar) of Spencer, as she is dying of cancer. In a foggy state of mind, Annette tells Grace that she basically needs to get with Spencer as he needs a strong woman in his life. She happily obliges knowing the monetary gain that comes from this commitment.

We are finally given another game, and it seems like ages since the last one. This game is a game of intelligence, and feels like a scene from Escape Room. Theo, Vincent, and Liv refuse to take part in the game, while Theo wants to do whatever it takes just to get off this godforsaken island. They lock Grace in a room, because she insists on playing the game and winning the money at any cost. At this point there are four people left, and making if I made it this far I would probably participate in the game, knowing it’s either that or death. Grace finds one of Spencer’s many secret doors and makes it down to the basement where she takes on the game solo.

During another flashback we are shown just how deplorable Grace really is, making me feel bad for rooting for her. Annette starts to feel a bit better and seems there may be a chance she is on the mend, and even goes as far as saying all the things she said to Grace regarding getting with Spencer was in a moment of weakness. We are shown the true evil in Grace, when she tells Annette that when it comes to a death relating to cancer an autopsy is not performed as the coroner knows the death is related to cancer…she then takes out a syringe of something and kills Annette. This was honestly a surprise and completely out of left field. While Grace may not be the most morally sound, just like the rest of the family, I really did not see this change of character and was caught completely off guard. 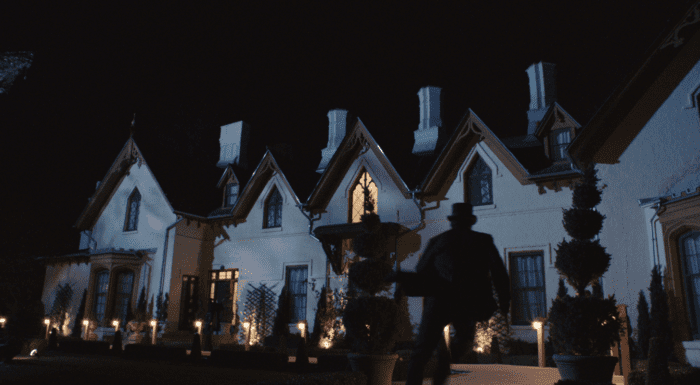 Grace, who is playing Spencer’s latest game by herself, solves the first puzzle, which leads to the walls slowly starting to close in. The next puzzle she has to solve is to figure out who the killer is. She soon, and almost not soon enough, realizes the killer is not a family member. This revelation exposes a key. Grace escapes the game thinking she won…but unluckily for her, she did not. After boasting to Theo, Vincent, and Liv that she got the key, Vincent says, “First and last are the same if one person plays.”

After trying a plethora of doors around the house, Grace finally finds the door the key unlocks. She enters the room to find bars of gold! Thinking she won the bounty, she takes a moment to let relief sink in. There is a brilliant shot of Grace looking at the gold bars, and in the background, the Masked Killer slowly lifts their head up and goes after Grace. This leads us to our next kill, and it is gnarly. After fighting back and forth for a short time, the Masked Killer gets the upper hand and gets Grace to the ground. They end up pouring melted gold on Grace’s face and it is completely wild! This is honestly a very inventive kill and SFX-wise looks near perfect.

Theo, Vincent, and Liv finally break into the locked room to find Grace’s corpse. Liv finds a secret passage leading from this room, and they know the killer had to have escaped from the hallway. Theo and Liv follow the passage while Vincent decides to flank around the front. This leads to a tussle between the three living Galloways and the Masked Killer. The fight makes its way into the house, and we are finally shown the true identity of the killer: it’s Dr. Trinh (Jeananne Goossen).

The major reveal of the killer makes up for the slightly tamer episode and is a solid follow-up to the ecstatically wild “Face Time.” We have one episode left. The killer is revealed, and three Galloways are left. Who will live, who will die, who will get Spencer’s massive wealth, and how the hell did Dr. Trinh survive that woodchipper?

Looking for more on Slasher: Flesh and Blood? We’ve got you: