In the pantheon of famous movie monsters, one creature towers above all the rest (quite literally)—Godzilla. He’s called the king of the monsters for a reason, and ever since his debut in 1954, he’s been just about unstoppable both in his films and in pop culture. With his size, strength, near-invulnerability, and atomic breath, it’s easy to see why he’s been so successful for the past seven decades. Godzilla brings a very entertaining array of powers and abilities to the screen, so fans just can’t get enough of him.

But those well-known attributes aren’t the only things the big G has going for him. If you delve deep into his filmography, you’ll find that he actually has a whole bunch of hidden talents the majority of people don’t know about. Sure, most iterations of the monster showcase the same powers we’re all familiar with, but a few have departed from the traditional Godzilla template in some pretty radical ways.

So if you think you know the king of the monsters, think again. He can do a lot more than we normally give him credit for, and sometimes those hidden abilities have actually saved the planet from evil monsters that want to destroy all life as we know it. So without further ado, here are five of the best powers you never knew Godzilla had.

Everybody knows Godzilla can’t fly, right? Wrong. While he doesn’t have wings, and he almost always stays either on land or in the water, there is one movie where he takes to the sky: Godzilla vs. Hedorah (also known as Godzilla vs. The Smog Monster). If you’ve never seen this one before, it’s an absolute trip (the LSD kind). Not only is it about a monster that’s basically made out of pollution, but it also features some really psychedelic imagery that will make you wonder what the filmmakers might have been doing during their downtime.

On top of all that, like some sort of bizarre, early 1970s coup de grâce, there’s the scene where Godzilla flies. It comes towards the end of the film’s final battle when the big G clearly has the upper hand. Hedorah knows he’s losing and he tries to fly away, but Godzilla is determined to finish this fight so he unleashes his most unexpected power. He uses his atomic breath to lift himself off the ground like a rocket and he propels himself all the way to his fleeing foe. It’s the only time Godzilla has ever flown in his almost seventy-year cinematic history, and it’s fitting that it happens in the weirdest film in the entire franchise.

With over thirty films under his belt, Godzilla is bound to have his fair share of stinkers, but few are as bad as Godzilla vs. Megalon. It’s definitely one of the top two or three worst Godzilla movies ever made, but surprisingly, it also has one of the best scenes in the entire series. In this film, a hidden undersea civilization named Seatopia finally gets fed up with the surface world’s nuclear testing, so they send a beetle-like kaiju named Megalon to destroy the surface dwellers. Megalon soon teams up with the space monster Gigan, and in the finale, the two engage in some very kid-friendly combat against Godzilla and a giant robot named Jet Jaguar.

Towards the end of the fight, Godzilla and Jet Jaguar inevitably gain the upper hand, and Gigan flies away to lick his wounds. That leaves Megalon to fend for himself against the two good kaiju, and as you can probably guess, it doesn’t go so well for him. Godzilla and Jet Jaguar take full advantage of the situation, and at one point in the fight, they double-team Megalon in one of the most hilariously ridiculous scenes in giant monster history. Jet Jaguar grabs him from behind, and Godzilla slides towards them on his tail with his legs up, dropkicking the helpless kaiju. It’s one of the best “so-bad-it’s-good” moments in the entire franchise, and it even makes Godzilla vs. Megalon almost worth a watch (although, to be honest, you’re probably better off just looking for this scene on YouTube). 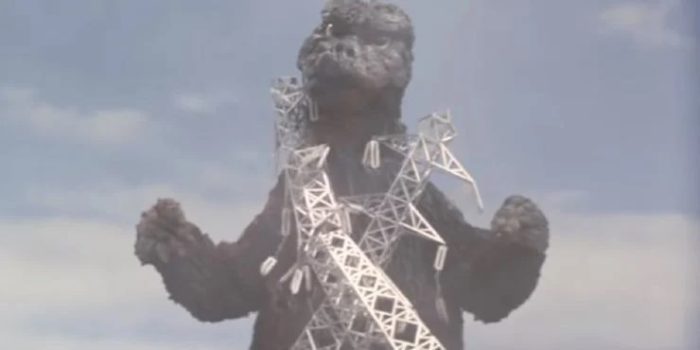 Throughout the years, Godzilla has faced off against many opponents, but few are as beloved as Mechagodzilla, his giant robotic doppelganger. Mechagodzilla is literally just a mechanical version of Godzilla but it has a whole bunch of bells and whistles that make it more than a match for the big G. In fact, in Godzilla vs. Mechagodzilla, its cinematic debut, Godzilla has to team up with a new monster named King Caesar to beat it, and even then, the two of them have a ton of trouble taking down the giant robot (much like Godzilla and Kong do in their movie).

But when they finally do, their victory comes courtesy of yet another new power that Godzilla never showed before. Earlier in the movie, you see him get struck by lightning, and he begins to glow a strange blueish color. At that point in the story, you’re not quite sure what to make of it, but when you see how he defeats Mechagodzilla later on, it all comes together.

Towards the end of their fight, Mechagodzilla tries to fly away but Godzilla refuses to let that happen. He begins to glow that same blueish color and he turns himself into a giant magnet to draw the fleeing robot back to him. He makes Mechagodzilla stick to him like glue (or, you know, like a piece of metal on a magnet), and from then on, the good guys have no trouble finishing it off and keeping the planet safe from this mechanical monster. 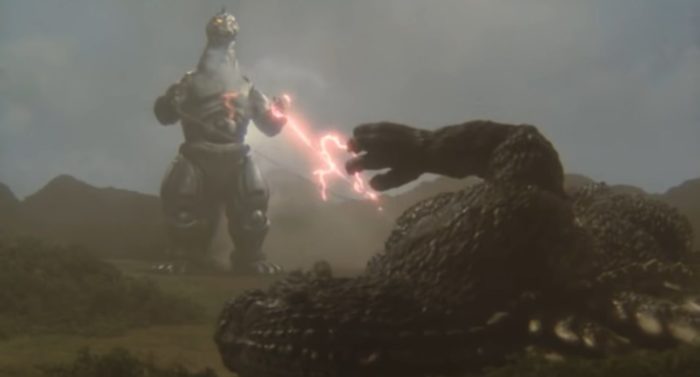 Throughout most of his cinematic history, Godzilla has been portrayed as a nigh-unstoppable force of nature. More akin to a hurricane than an animal, he usually just does whatever he wants whenever he wants, and humanity’s meager weapons typically have little to no effect on him. However, that’s not always the case. There have been a few times when people have found ways to do real damage to him, and when they come up with just such a plan in Godzilla vs. Mechagodzilla II (oddly enough, this movie has absolutely no connection to the original Godzilla vs. Mechagodzilla), it backfires in a way nobody saw coming.

In this timeline, Mechagodzilla is built by humans to defend themselves against Godzilla, and its creators come up with a plan to destroy the big G once and for all. The first time these two behemoths meet, Mechagodzilla quickly gains the upper hand so it goes in for the kill. It shoots out a pair of cables that burrow themselves under Godzilla’s skin and they send out shock waves to electrocute him.

At first, it looks like this plan is going to work, but before the electricity can do too much damage, Godzilla reveals another new power that saves the day yet again. He manages to reverse the current and make it flow back into Mechagodzilla, frying the robot’s systems and turning it into a sitting duck. From there, he wins the fight easily and humanity has to go back to the drawing board to figure out how to stop this seemingly invincible foe.

5) Shooting Atomic Breath Through His Tail and Dorsal Plates

The 2016 gem Shin Godzilla is a weird combination of familiar Godzilla tropes and an entirely new take on the big guy. On the one hand, it brings Godzilla back to his roots as a deadly (and deadly serious) force of nature that threatens to destroy the human race, but on the other hand, this version of the monster is unlike any we’ve ever seen before. For instance, Godzilla starts off looking like a completely different monster and he slowly evolves into the creature we all know and love.

But even when he reaches his final form he’s still more than just the same old Godzilla. He has an interesting new power, and it’s one that I personally never thought I would see. In addition to shooting his signature atomic breath out of his mouth, this iteration of Godzilla can also shoot it from his tail and his dorsal plates. It’s a pretty big departure from what we’re used to, but given that Shin Godzilla completely rewrites the creature’s mythology, I think it mostly works. I don’t want this to become a staple of future Godzilla reboots, but I’m totally fine with it as a one-off experiment.

Looking for more about kaiju films? We’ve got you:

“Why the Humans in Kaiju Movies Matter”