If you’re a movie fan, you probably know that Netflix original films are very hit or miss. Sure, they’ve had some good ones like Army of the Dead and Vampires vs. the Bronx, but they also have a whole bunch of disappointing titles like 1922 and The Cloverfield Paradox. You just never know what you’re going to get with these movies, so when I finally hit play on their new kids’ horror film Nightbooks, I wasn’t sure what I was in for. I enjoyed the trailer, but as any movie fan can tell you, that doesn’t mean much.

There have been plenty of good trailers for bad films (and vice versa!), so no matter how good a trailer is, you never really know what the movie is going to be like until you actually watch it. But thankfully, Nightbooks did not disappoint. It doesn’t exactly break any new ground, and I’m not going to tell you to drop everything and watch it, but it’s a fun little film that’s worth your time, especially if you have kids.

Directed by David Yarovesky and starring Winslow Fegley, Krysten Ritter, and Lidya Jewett, Nightbooks tells the story of a boy named Alex who’s absolutely obsessed with horror. He has awesome horror movie posters plastered all over his bedroom, and he likes to write his own scary stories as well. As a lifelong genre fan myself, I loved this kid from the very first second he came on screen. I grew up watching horror movies the way normal kids watch Disney movies, and I wrote a few scary stories as well back in the day, so this character resonated with me in a way few others do.

But even if you don’t identify with Alex like I did, I think you’re still going to like him. He’s played really well by Winslow Fegley, so you buy into him right away. When the movie starts, he’s actually disillusioned with his horror fandom. You don’t know what happened, but something has made him turn his back on the genre he loves. He starts taking down his posters, and he decides to stop writing scary stories. 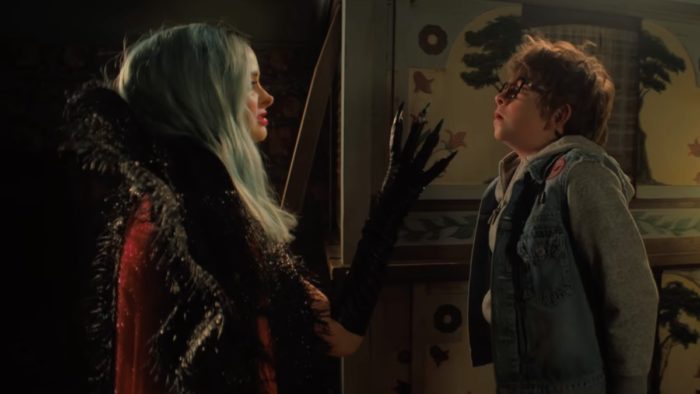 Seeing him feel that way is pretty heartbreaking, so you sympathize with him almost immediately. You just want the kid to be happy, and that sentiment remains with you throughout the film’s entire runtime. It grounds Nightbooks in genuine emotion and humanity, so it keeps you hooked even when the story slows down a bit.

After Alex decides he’s done with horror, he runs away from his parents, and he unknowingly finds his way to the apartment of an evil witch. She kidnaps him and tells him he has to read her a scary story every night, and he soon meets another prisoner, a girl named Yazmin, who shows him the ropes and teaches him a few things about the apartment.

From there, Nightbooks begins to slow down, and the rest of the first half ends up being a bit of a letdown. It’s not exactly bad, but it’s not great either. It has some cool visuals here and there, and Winslow Fegley’s performance as Alex keeps you invested in his character, but other than that, I didn’t find this part of the movie too memorable.

But thankfully, at about the halfway point, the story finally picks up again. Alex and Yazmin decide they need to escape, and seeing them formulate and execute their plan is pretty interesting. As you could probably guess, things don’t go quite as smoothly as they planned, so the story takes a few fun twists and turns that keep the story fresh.

Then, with about a half-hour left, Nightbooks really kicks into gear. This last part throws some very unexpected surprises at you, and without spoiling anything, I’ll just say that it hooks you completely. In fact, I’d even say that these last 30 minutes alone are worth the price of admission (so to speak), so if the whole film had been that good, it would’ve been a masterpiece. Unfortunately, that’s not the case, but ending on such a strong note makes the boring middle part more than worth it.

All that being said, I do have to caution that this is a kids’ movie, so don’t go into it looking for any hardcore horror. It has some cool monsters and a few slightly spooky scenes here and there, but on the whole, this is very much a children’s horror film. In terms of scariness, I’d say it’s somewhere between The Nightmare Before Christmas and Scary Stories to Tell in the Dark, so while it’s probably not appropriate for really young kids, I think pre-teens should be fine with it as long as they’re not overly scared of monsters and witches.

So at the end of the day, if you’re a fan of kids’ horror, I’d definitely recommend giving Nightbooks a shot. While it has its ups and downs, the good in it far outweighs the bad. It’s grounded from start to finish by a really sympathetic and likable lead character, it has some cool visuals and a few fun monsters, and the last half hour is really enthralling. It’s fun for just about the whole family, so if you can watch it with some little ones, I’d say that’s probably the way to go. But even if you can’t, this film can still appeal to the kid in all of us, so if you’re in the mood for some light genre fun, Nightbooks will definitely fit that bill.