With the shrieks of Florence (Sabrina Grdevich) still ringing in our ears, Slasher: Flesh & Blood S4E6 “Face Time” finally sees the vile woman getting her comeuppance. After Theo (Alex Ozerov) locked her in a stock that she herself created in the previous episode, it is nice to see the family finally recognize Florence for the cold-hearted villain she is, it’s just too bad we had to lose O’Keefe (Breton Lalama) in such a brutal fashion to get here. 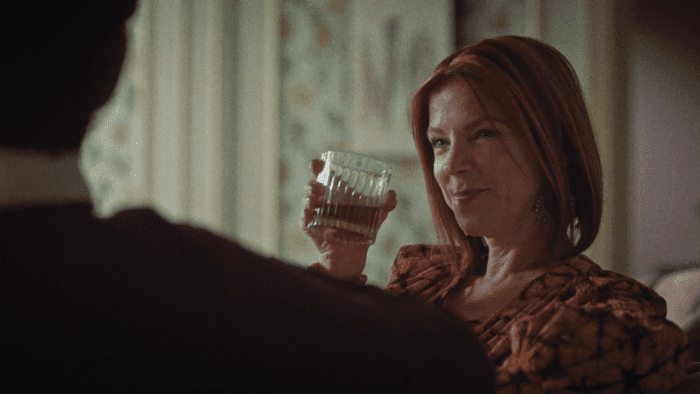 Despite the knowledge of her betrayal of O’Keefe in her heartbreaking final moments in the bunker, the family still argues over whether it is right to leave Florence outside all night in danger of becoming the next victim of The Gentleman. As the viewer, it’s hard to feel anything but rage that Florence has lasted this long, and her incessant screams make for an irritating backdrop of otherwise pleasurable vitriolic retribution. The strangest protestations come from Livinia (Sydney Meyer), who criticizes Theo for being too harsh. This is one of many nonsensical character motivations in the show, as it is difficult to imagine anyone coming to the rescue of a woman who tried to kill her and her mother only two episodes prior.

While the family fights, Aphra (Nataliya Rodina) sneaks out and makes her way through the dark to Florence who, upon seeing her, is certain she is there to free her from her prison. Anyone who has been paying attention will know this isn’t the case. Aphra has been strange from the very beginning, and “Face Time” finally focuses on her story, and though none of it is a revelation, what is hard to believe is how anyone could have ever been convinced she was an innocent child.

Aphra approaches Florence with a pair of scissors and taunts her before beginning to cut through pieces of her clothing. As Florence begins screaming (more screaming, so much screaming) Aphra grabs her tongue with a pair of pliers and proceeds to cut her tongue out in an incredibly gory and auditorily repulsive manner. The Foley artist on this episode deserves either a tongue lashing or a medal.

No surprise, Aphra pops the piece of tongue into her mouth and begins to chew. This scene is followed by a flashback to Aphra’s first time meeting Seamus (Chris Jacot) and Christy (Paula Brancati), with her soft voice ever so excited to finally find a daddy to love her. Her insistence upon calling Seamus “daddy” has always been a sticky wicket for this viewer. Every utterance drips with an inappropriate undertone, and we are finally made privy to exactly what it is about Aphra that feels so wrong.

In the present day, Christy wakes in the middle of the night and threatens Vincent (A.J. Simmons) with a rubber bullet to the eye if he refuses to give her his gun. It’s still unclear why no one has tried to keep the gun for themselves, especially Livinia who has proven many times she can whip Vincent’s a**. He hands the gun over and Christy makes her way into the night to find Aphra. Find her she does, standing behind Florence, stabbing her repeatedly with the scissors. As Christy attempts to process the sight of her daughter torturing Florence, The Gentleman approaches in the distance and they are forced to flee. Aphra insists on watching as The Gentleman cuts the zip ties off Florence and lets her stumble a few feet crying “I won, I won” before running at her full speed and impaling her through the breasts onto her own artistic creation. Let us not be confused, the location of the puncture wounds, one spike through each breast, is a clear symbol of her perceived (and realized) failure as a mother. Could this be a hint as to who is behind The Gentleman’s mask?

Christy pulls Aphra to the bunker where Aphra screams and cries about being a “bad girl.” She reacts so violently to Christy telling her that it was not Florence who killed Seamus, as she thought, that Christy is forced to give her a sedative to calm her down. Another flashback takes us back to Aphra’s first night with the couple, when Christy wakes up and sees Aphra standing in the shadows, staring at them as they sleep, after having soiled her bed. Instead of putting their foot down, or cleaning her up, they allow her to sleep in the bed with them, an awkward display as Aphra cuddles up to Seamus and Christy is left pushed to the far side of the bed.

Back in the bunker, Christy opens Aphra’s phone and flips through photos of Seamus and the three of them as a family, before viewing more incriminating photos, those of the dead family members and Aphra posing with the bodies in disturbing ways. The viewer already knows of Aphra’s fascination with the macabre and her propensity for cannibalism, so this is no big reveal for us, but Christy is mortified to see who she thought was a demure (if exceptionally strange) little girl showing such a lack of humanity in the photos.

While Christy makes her horrifying discovery, the morning light gives Livinia and Theo the courage to venture outside to look for Christy and check on Florence. Upon finding Florence’s mutilated body, Theo displays shock and angst, though, really, what could he have expected? Now both Livinia and Theo have lost a terrible mother, if we recall that Birgit (Patrice Goodman) was responsible for Vincent’s kidnapping and consider that and her other actions terrible.

After another flashback wherein Aphra listens as Christy tells Seamus they should consider sending her back to the orphanage, Christy discovers the most incriminating evidence of all. A video of Aphra speaking to a man, not as a little girl, but as the grown woman she is, expressing excitement over all the money she was going to swindle from the Galloways. Again, no shock to anyone who has questioned how this girl could look so much like a woman and have no issue eating human flesh. This reveal is very reminiscent of Esther’s big moment in Orphan, without feeling as original. After watching the video, Christy looks up to find Aphra awake and staring at her as she snoops.

Vincent helps Livinia and Theo carry Florence’s body into the walk-in where all the other dead family members are being held. Theo tries unconvincingly to reassure Vincent that he didn’t want Florence to die, but at this point, no one can believe him. Not because he seems an evildoer, but because Florence was so unapologetically vicious and narcissistic (she did kill Dr. Persephone after all) that it would be strange to not want to see her dead.

Grace (Rachael Crawford), recovering from the rubber bullet to the eye, and Liv realize that Spencer (David Cronenberg) is still in his bed upstairs and go to get him. It could be assumed that the body would be quite fresh after sitting out in the open, but we don’t get to see the phase of his decomposition as his body has disappeared from his room.

In the bunker, Aphra tells Christy she is the only woman who could ever love Seamus and that Christy could not truly love him because she didn’t realize that he preferred to sleep with men. A strange way to out the dead, but Aphra seems proud of herself as Christy has little time to come to terms with what has been revealed. Aphra attacks Christy—biting, clawing, and chewing at her face like a rabid animal, laughter mixed with the pained screams of a woman being eaten alive.

While those of the family who remain discuss burning the mansion down and leaving the Galloway fortune to rot, Christy stumbles in, her face a bloody nightmare. The practical effects throughout the series are downright brilliant, and Christy’s once beautiful visage is now a dangling heap of flesh. She tells them what Aphra did before begging Grace to kill her with Vincent’s gun. Theo, Livinia, Vincent, and Grace realize that there is no saving her and, after one final scream, Grace shoots Christy in the head.

Outside, in possibly the most non sequitur scene of Slasher: Flesh and Blood, Aphra finds a mushroom on the ground, utters the word “magic,” and then supposedly begins a psychedelic psilocybin trip before taking the hand of The Gentleman who has appeared before her and being led away, into the woods, possibly by a new “daddy” who will love her.