The documentary filmmaker is a special breed. They are meant to be invisible, to observe without judgement, to offer an honest and unbiased look at their subject. There are those faux-documentary style horror films that take a bleaker and more intense approach, like The Blair Witch Project and Creep, taking the format to its most terrifying conclusion. Conor Boru takes a different approach with When the Screaming Starts, veering into comedic territory with documentarian and Louis Theroux wannabe Norman Graysmith (Jared Rogers) as he is pushed to his ethical limits after accepting an invitation to follow an aspirational serial killer on the journey to his first big kill.

Norman is searching for his big break and sees the potential in Aidan (Ed Hartland), a bumbling horror-lover who has spent his life idolizing serial killers, determined to one day join the ranks of the best. He is accompanied by his girlfriend, Claire, a morbid photographer whose only pleasure in life seems to be bearing witness to pain and death. When Norman first meets Aidan, he is excited to show off his preferred means of (eventual) murder, including stabbing his victim before slitting their throat. He practices using a retractable knife, giggling gleefully while Claire looks on with barely concealed disdain.

Aidan chooses an old band mate as his first victim, as he believes him to be responsible for the band’s failure. It seems throughout the film that Aidan is eager to blame everyone but himself for his misfortune, but that is pretty accurately keeping in line with white male killers who more often than not end up blaming their mommies for their misdeeds. In turn, the viewer can only imagine Aidan’s relationship with his own mother based on Claire’s apparent withholding nature. It’s clear the two don’t have sex, though she does encourage his first kill with the parting words, “Kill someone and then we can have sex,” with the strong insinuation that it would be their first time.

After failing this first murder attempt and nearly being overpowered and hurt himself, Aidan switches his tactic by deciding the best course of action to realize his dreams will be to start a Manson-style family. Enter an ensemble of hilarious and dangerous characters, as well as a few more pathetic lost souls just looking for a community. Jack (Yasen Atour) is a fish monger who specializes in cheating people out of fresh fish. Viktoria (Vår Haugholt) and Veronika (Ronja Haugholt) are twins with sociopathic impulses and a dark sense of humor who enter the circle with the anticipation of finally being able to carry out their dual knife-wielding fantasies. Masoud (Kavé Niku) is a yogi looking for the lost love he spent a single night with. Unfortunately for him, he doesn’t speak English, and his involvement in the family becomes a running joke of misinformation and mistaken intentions. 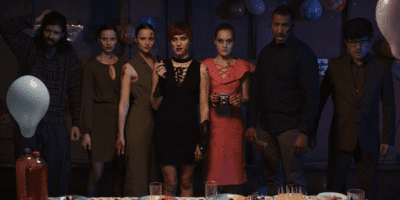 The dynamic once the group forms is what propels When the Screaming Starts into fresh territory. The acerbic tone of British humor hits differently when the collective begins their bickering, and Aidan’s authority is immediately threatened by standout bad ass Amy (Octavia Gilmore), a woman with a real hunger, both for blood and for Claire. The group moves into a house, one happy family, and begins their training, utilizing Aidan’s stab-stab-slit method of murder with their own retractable knives, a gift from their self-proclaimed leader.

The family’s first target is a house recommended by Amy, who seems to know her way around. The cameraman accompanies them on the big night, with Aidan noticeably absent, as they interrupt a wealthy family’s dinner party. The screaming does in fact start after some taunting, with Amy delivering the first cut. Like foxes in a hen house, the family doles out punishment to the unsuspecting dinner guests. The joy of this first kill is palpable as the family returns home to party. The night ends poorly for Aidan, however. He is quick to take the credit for the murders, stating that whatever crimes his family commits are, in fact, by his own hand. This sentiment is not taken lightly by Amy, in particular, who points out that Aidan is the only person in the family with clean hands. A mutiny soon follows, and the family veers away from Aidan while the film veers toward a hilarious yet somewhat tragic third act.

While Norman the director remains fairly unbiased throughout his process, he is tested by the family, both with threats of harm and invitations to participate. His dreams are more important to him than the persistently discomfiting seeds of moral doubt that are sown in his mind, and he knows the value of the footage his team has collected. However, once Amy is no longer under the watchful eye of Aidan, there is no longer a promise of protection for Norman and the documentary team, and the power is quickly shifted into Amy’s hands, forcing Norman to decide which is more important—his career or his life. When the Screaming Starts joins quite a few other horror comedies at FrightFest, and it’s obvious some filmmakers have chosen to take the lighter route in lieu of the darkness of the past year and a half. This story is unique, the writing is whip smart, and knockout performances from the whole cast elevate this film above its peers. Anyone looking for some good gore and a lot of heart will love When the Screaming Starts.