If there’s one horror subgenre that desperately needs to have some new life breathed into it, it’s werewolves. Some of the greatest horror movies of all time involve these mythical beasts but their cinematic canon is woefully thin. You can count on one hand the number of really beloved werewolf films, and once you move beyond that very small group, the subgenre takes a steep nosedive in quality. So when I heard about Are We Monsters, I got really excited. I’m always on the lookout for new werewolf movies, and I had high hopes that this one would feature a fresh take on these classic monsters.

Directed by Seb Cox and starring Charlotte Olivia, Jathis Sivanesan, John Black, and Stefan Chanyaem, Are We Monsters starts out with a father and son team hunting a werewolf. The father is teaching his son about these creatures as they go along, and it’s pretty interesting. This opening sets up the film’s unique take on werewolf mythology, and when the monster finally shows up, director Seb Cox does a pretty good job of building up the tension and making you feel the duo’s fear.

However, I had one big problem with this scene: the werewolf itself. While the way it attacks its victims and the sounds it makes are terrifying, the creature’s design is absolutely bizarre. It’s completely different from any other werewolf we’ve ever seen, so I don’t want to spoil anything by explaining what it actually looks like. I’ll simply say that I have to give the filmmakers credit for trying something new, but it was just too weird for me. It outweighed everything they got right, and it took me out of the movie a bit.

However, we don’t actually see these creatures all that much after the opening scene, so as Are We Monsters progressed, their look became less and less of a problem for me. In fact, as the story went on, I actually began to really like this new take on werewolves. In particular, the film’s unique mythology behind them and their origin are pretty cool, so by the time the credits rolled, I was quite happy with the overall package.

After that opening scene, the film introduces us to the real star of the show, a young werewolf named Maya, and the story really kicks into gear. She teams up with a pair of werewolf hunters and a somewhat out-of-place teen named Luke to figure out how to stop killing people, but unbeknownst to her, the werewolf hunters have plans of their own (and you can probably guess what those plans are).

Once we meet these four characters, Are We Monsters becomes all about them, so the film basically stands or falls on the strength of its dialogue and performances. And admittedly, I’m a bit conflicted at this point. On the one hand, these characters have some serious flaws, but on the other hand, they also work wonderfully as the heart and soul of this story. Let’s start with the bad. Most noticeably, the acting is a bit hit or miss, and even when the performances are good enough, they never get much better than that.

On top of that, all of the characters except Maya have their own unique problems as well. For instance, I’m still not sure what Luke was doing in the group. He didn’t seem to have a well-defined role in this little werewolf self-help camp, and the film does a poor job of explaining how he ended up in it at all. In contrast, while I understood what the werewolf hunters were doing, they were just bland. They didn’t have any appealing personality traits or quirks so I never felt like I really connected with them.

That being said, there is one great thing about this group, and it probably outweighs all the negatives: the way they embody this movie’s theme. Werewolves are usually at their best when they’re metaphors for the war between good and evil that rages inside all of us, and Are We Monsters is no exception. However, it approaches that topic in a different way than we normally see in this subgenre. Werewolf films tend to focus more on the monster’s evil side, so they’re usually about people’s struggles against their baser natures, but this one is the exact opposite. 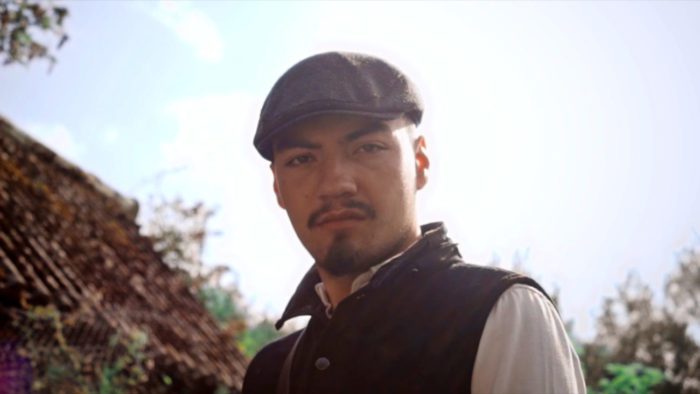 While Maya definitely struggles with the evil side of her nature, the movie is more about finding her human side. She already knows she’s a monster, but she doesn’t really believe there’s much good in her, so Are We Monsters is primarily about her quest to learn that she’s a human being who deserves to live a human life just like everybody else.

Admittedly, the dialogue is a bit too on the nose at times, but on the whole, it does a really nice job of conveying the message that Maya is more than just her flaws. There’s more to her than just the monster that eats people one night a month, so that doesn’t define her. Instead, she’s defined by the good things in her nature like her sense of humor and her talents.

This is a great theme, and it’s one we can all relate to. Sure, I don’t know anybody who literally turns into a man-eating monster when the moon is full, but we all struggle with our self-worth. We all need to learn that we’re not defined by our defects or the mistakes we’ve made in the past. Our true selves are the good parts of our nature, and we deserve to be loved and appreciated for them rather than hated and rejected for all the other stuff.

I’m a sucker for themes about human dignity and worth, so after thinking about Are We Monsters and digesting it a bit, I’m going to recommend it. The film definitely has its fair share of flaws, but much like Maya herself, it’s not defined by them. Instead, the cool new werewolf mythology and the great, relatable theme outweigh those defects just enough to make it a worthy addition to the lycanthropic canon. So if you’re a fan of these shape-shifting creatures, I think you’ll enjoy this movie.

Are We Monsters is playing at FrightFest on August 28.