We’re in the middle of a slasher revival in today’s zeitgeist, and I have some mixed feelings about that. I struggle to enjoy meta commentary on the genre but weirdly like straightforward, modern executions on the formula. However, there’s a book that came around near the start of this modern revival that manages to feel like everything at once; it’s a deconstruction of the slasher genre while also being a compelling, pitch black drama. It indulges in the schlockier, more exploitative side of horror while also being filled with empathy for its many damaged characters. Kin by Kealan Patrick Burke is a lot of things, and it’s a small miracle that it’s also one of the best horror novels of the 2010s.

Kin begins at the end of a very familiar story. Claire Lambert is found walking on the side of the road completely naked and drenched in the blood of others. She’s found by a father and son in the middle of nowhere, and they bring her to safety, but it comes at a price. When she’s regained her wits, Claire remembers everything that happened to her. She wants to return to Elkwood to seek vengeance on the backwoods family that made her the sole survivor of a total bloodbath, and many others get drawn into this hateful quest, as well.

Yes, Kin is essentially about the aftermath of a brutal, nihilistic mid-2000s horror movie. The most obvious influence is Texas Chainsaw Massacre, with the cannibalistic, zealous backwoods family known as the Merrills, but there’s also a very hefty dose of something like Wolf Creek. It just has that hopeless, brutally nihilistic tone of the latter, with no character being safe once the action gets rolling. But it still manages to feel like a grounded, plausible story thanks to the way Burke writes the surprisingly expansive cast.

You know the ending scene in Texas Chainsaw Massacre where Sally is picked up by a random trucker? Burke turns that random trucker into two fully fleshed out characters in the form of Pete and his father. Pete is somewhat slow witted and isn’t sure what to make of the situation. He’s mostly mesmerized by Claire, although thankfully Burke isn’t explicit or gross about this. He’s lived a sheltered life and has never seen anything like this situation before, but both him and his father come across as caring people. Granted, his dad has a mean streak in him, but the pair genuinely do everything they can to help Claire.

The rest of the characters aren’t slouches, either. Finch, for instance, is an Iraq war veteran who hears about the massacre from Claire once she’s returned to society. It turns out that his younger brother Daniel is among the dead, and he is more than happy to take out his anger, anxiety, and grief on the Merrill family. Speaking of, the Merrills are some of the most disgusting, evil, instantly hateable villains I’ve read about in quite some time.

One of the novel’s trademarks is bouncing around between characters, and everything from the Merrill family is told from Luke’s point of view. He’s one of many of the Merrill children, and he is part of the reason Claire was able to escape. He is the one who stalked her through the woods, along with his volatile brother Matt. Throughout the book, he is constantly letting his insane father down. See, Mr. Merrill spoon feeds his wife whatever he can find, and the scenes of this happening are the book at its most disgusting. He also constantly ties everything back to his own perverse view of Christianity, and this is about as old testament as it gets. Somehow Luke not killing Claire is being disobedient to his parents, and as such, he is eventually punished in a way that made my jaw drop when I first read it.

There’s no getting around the fact that the Merrills are stereotypes straight out of the grimiest exploitation movie, but I think what makes it work is how every other part of the story feels grounded. Claire’s trauma, Finch’s desire for revenge, and Pete’s genuine want to help in whatever way he can all feel real, relatable, and achingly human. Plus, seeing the family through Luke’s skeptical eyes is a nice counter balance to the scenery chewing his father does. 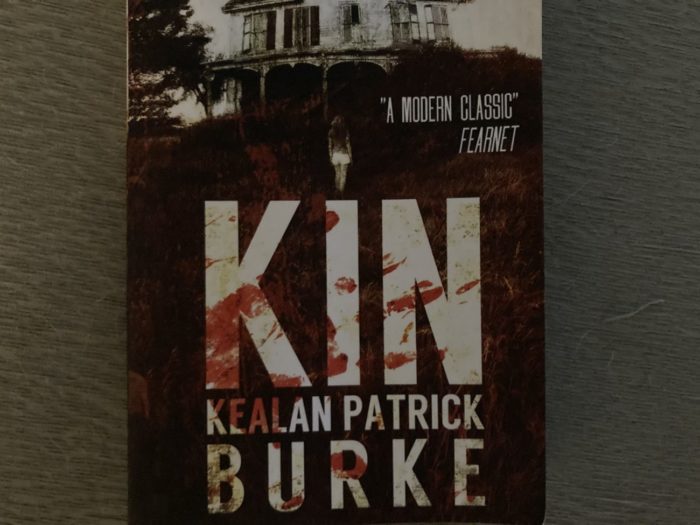 All of this ties together into a story that uses familiar genre tropes to feel real, grounded, and almost literary in its ambitions. Kin is as much about just how far a person might go to survive and avenge a loved one as it is about fighting against a bunch of cannibals. The ending sequence feels tragic in the way it plays out, grand like something out of a play. It’s through the careful balancing act of all the characters that Burke achieves this feeling. Each story balances out the others, and it all ties together in a bloody, upsetting climax.

Strictly speaking, there’s not a whole lot that’s actually new about Kin. The elevator pitch kind of sounds like someone watched a bunch of ’70s exploitation movies and executed them in a similar manner to Wolf Creek, but it’s very much a case of something being more than the sum of its parts. Burke has an unflinching eye for the nastiest parts of Kin seen in the best extreme horror stories. Despite just how depraved it gets (and there are some real doozy scenes in here), it all feels purposeful, in service to the story rather than being disgusting for its own sake. Kin, to me, is a deconstruction of the slasher genre done right, and it deserves to be read by a wider audience.