Witches and the Occult have been a staple subgenre for quite some time, with some noteable ones of the past few years like Robert Egger’s The VVitch, The Love Witch, The Autopsy of Jane Doe, Suspiria, Fear Street: 1994/76/666, to name a few. Some of them are great (the aforementioned The VVitch and Suspiria) and some of them are not so great (The Craft: Legacy, The Witches), but they never cease to be entertaining. Shudder jumped onto the scene with their exclusive series A Discovery of Witches, whereas Netflix hit hard with their insanely melodramatic and nightmare-inducing French series Marianne.

When a famous horror writer goes back to her hometown, she finds out that the evil spirit that plagues her dreams is also there in real life.

The majority of modern horror cinema (and based on its final product, I think it is safe to categorize Marianne as one long piece of cinema) is full of style over substance, which seems to be my new key phrase. Marianne on the other hand is full of style and substance; so much substance. My main gripe with Marianne is how Netflix defaulted to the English dub. That is a very minor issue but the English dub is incredibly bad. Like irredeemably bad. So I definitely recommend watching with the original French audio and with English subtitles.

One of the most interesting aspects of Marianne is how there are really two main antagonists: the witch Marianne and one of the people she possesses named Madame Daugeron (Mireille Herbstmeyer). While Marianne possesses quite a few people throughout the eight episodes, the longest and most prolific possession is through Madame D. Mireille’s performance is transcendent and one of the most horrifying portrayals of a witch to grace the silver screen. Her mannerisms and affectations under her possession are expertly depicted, while she does a complete 180 when Marianne leaves her body, which is just as wonderfully acted. I would wager to say that Marianne herself, while spooky as hell, is the scariest when she is in control of Madame D. 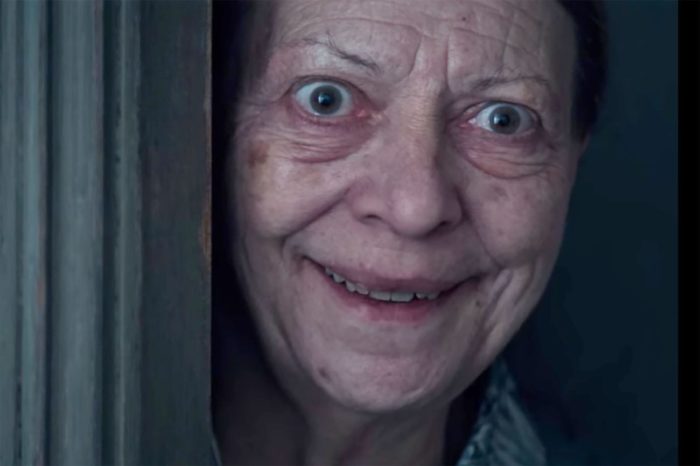 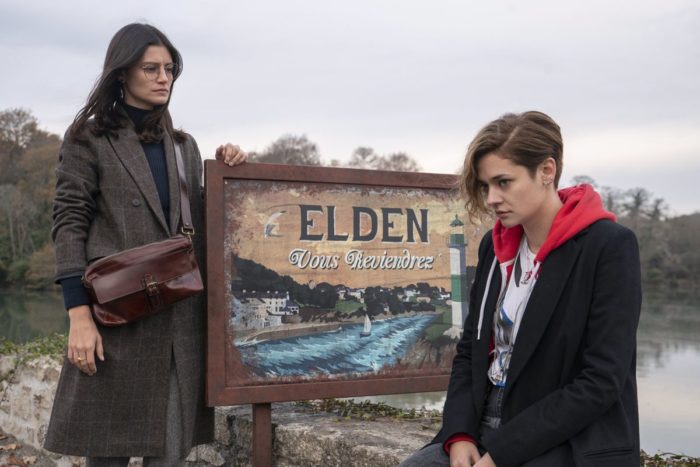 The show is mainly about horror novel writer Emma Larsimon (Victoire Du Bois), who gets Miseryed by Marianne. Emma’s insanely popular book series, surrounding a character name named Lizzie Lark who battles a witch named Marianne, is coming to an end. She wants something new and fresh in her life and decides to take a whack at writing a serious novel. Marianne has some other plans up her sleeve, as she derives her power from the novels Emma is writing. Rather than breaking her feet with a sledgehammer to force her to write, Marianne decides to break Emma from the inside out. It’s honestly impressive how far Marianne could and would go just to break someone to the point of submissiveness.

The circumstances of Emma coming to Elden are dismal, as days before she watched one of her old friends, Caroline (Aurore Broutin), commit suicide in her agent’s building due to the incessant mental torture from Marianne. Moments after entering Elden, Emma has her assistant Camile (Lucie Boujenah) pull over near a jetty, looking out towards the lighthouse; Emma looks forlornly towards the lighthouse. Her peaceful moment of silence is harshly intruded on by the preacher Père (Patrick d’Assumçao) and his dog, who can sense the essence of Marianne on Emma. This is a small piece of information that isn’t paid off until near the end of the series, when we find out why Emma had to leave Elden, but it is handled tactfully and doesn’t beat you over the head with the importance of their meeting. 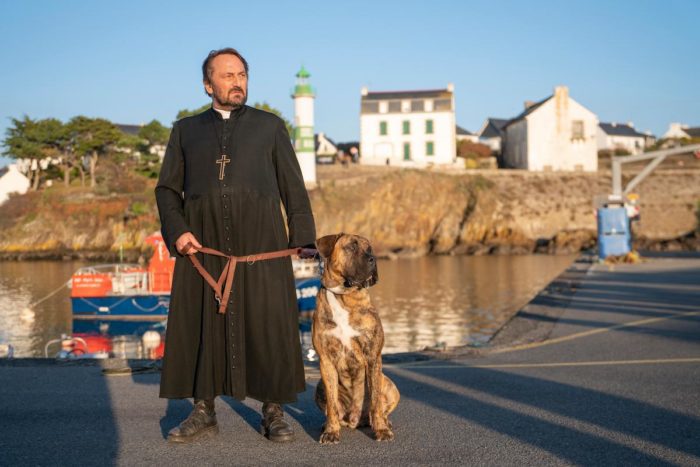 Emma is pretty much forced to write by Marianne when she adultnaps Emma’s parents, compelling them to walk naked into the woods. Writers/director Quoc Dang Tran (Nox) and respectively Samuel Bodin (T.A.N.K., Batman: Ashes to Ashes), created such a compelling first episode that perfectly sets the stakes, gives you all the basic information you need regarding Marianne, and gives you the proper emotional resonance needed to want to go forward.

The Phonecall & The Shipwreck Crew

There is a trope in horror of “the person you think you’re talking to on the phone isn’t who you think it is,” that isn’t used as much as it could be, or at least it doesn’t reach its potential when used. One of the eeriest scenes is towards the beginning of episode 2 C’est Coutume (It’s Custom) after Emma’s parents walk into the woods; Camile picks up the phone as it rings and has a fairly innocuous conversation with someone she thinks is from the security company, while the alarm is wailing away. We soon find out that it is Marianne she is talking to. It’s a short scene and feels like something that could have easily been cut if they were told to trim a page or two off of the script, but it’s just so damn impressively scary.

After Caroline’s funeral Emma heads back to the shipwreck, where she is soon greeted by the others from her old crew: Aurore (Tiphaine Daviot), Tonio (Mehdi Meskar), Arnaud (Bellamine Abdelmalek), and her former boyfriend Seby (Ralph Amoussou). For the most part they are excited to see each other, with the exception of Aurore, who still has some reservations regarding Emma, little does she know the truth behind Emma’s big secret. 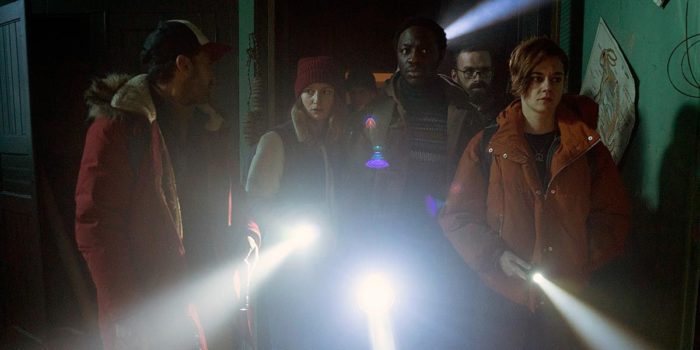 Since Marianne derives her power from Emma’s writing, her whole goal is to get Emma to write more. This was Marianne’s reason for taking Emma’s parents. Well guess what Emma starts doing? Yeah, writing. This is also around the time we are introduced to Inspector Raunan (Alban Lenoir), a mysterious and intriguing detective. Alban really embodies this role and is one of the more redeeming characters.

Is Marianne a Western?

There are a few standout scenes that are accompanied by western movie music, and I think to some points Marianne shares the one important aspect of western films, and that’s loneliness. One thing that Emma deals with constantly is loneliness, whether its of her own accord or not. She’s outcast from Elden at a young age, people in her life are going missing (Seby’s stepson, and his soon-to-be born child), and her assistance Camile is really only there because she is getting paid. The western music that plays throughout, which we first are faced with in episode 3 Je ne suis pas un cadeau (I am Not a Gift), and are given a wild wild west scene in episode 5 Tu l’as laissée… (You Left Her…). 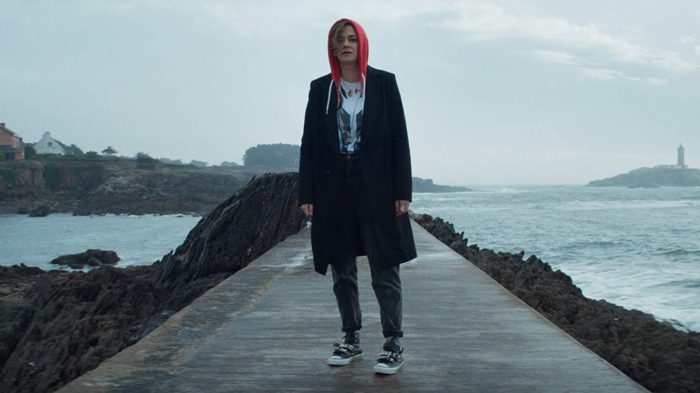 In episode 5 we are given the facts about what happened at the lighthouse 15 years ago, which aptly is referred to in the title of the episode. Based on the events that happen there, the priest has an honest, and somewhat sweet, conversation with 15 year old Emma where he tells her she has to, “earn [her] own exile.” The twang of a western guitar chord sets off Emma’s destruction, as she dismantles the church with a sledgehammer. It’s one of the most badass moments in the entire show. It’s a much needed energy boost from the onslaught of psychological terror we’ve endured.

So is Marianne a western? Nah, not really; though it shares some really important similarities with the essence of what a western represents.

The True Horror of Marianne

Marianne is a solid mixture of psychological and IN YOUR DAMN FACE horror. Some scenes are slow, with tiny things happening throughout the scene, and then others just go from 0 to 60 in a split second. Samuel Bodin and cinematographer Philip Lozano (Transporter, District B13) figured out how to make the most benign hallway feel malignant.

One of the MacGuffins is a skin bag. Yeah, a skin bag. Madame D (as Marianne) has an affinity for making little gift bags for her psychological victims; bags that are filled with bloody teeth with roots still attached, wrapped in skin (wait until you see where she’s getting the skin from), and tied together with hair. It is one of the most visually sickening props made for film/TV in quite some time. If you’re a fan of witchcraft/occult horror and enjoy a slow burn that hits you with an immense amount of scare but continues at a slow burn pace then this show is for you. There is so much to talk about with this show, and I think it’s an important piece of horror history and should be on the top of everyone’s watchlist. My goal wasn’t to give too much away, but to tease enough information to get at least one person excited to watch it. The only question I have for you is, “are you Marianne?”