There’s not nearly enough medieval horror. Few books touch it, and even fewer movies bother making an attempt. It is only in the world of video games that we lovers of medieval horror can get our fix.

Darkest Dungeon is one of the greatest medieval horror games to date alongside A Plague Tale: Innocence, the Castlevania and Dark Souls franchises, and Amnesia: the Dark Descent (A game that doesn’t technically count despite its highly medieval feel due to the fact that it takes place in the 1800’s).

Darkest Dungeon has it all, and is frankly one of my all time favorite games. Whatever you’re looking for, it’s here. The music? Intense, thematic, and anxiety spiking. The art style? Profoundly unsettling and unmistakably stylish. The gameplay? Deceptively complex and well crafted without being unintuitive. The difficulty? Nail-biting, unforgiving, and viciously punishing. The storytelling? Wayne June delivers a goosebump-giving performance as the dour and brooding narrator.

But enough of my raving! let’s descend into the nitty gritty of what makes Darkest Dungeon such a frightening and brutally medieval game. 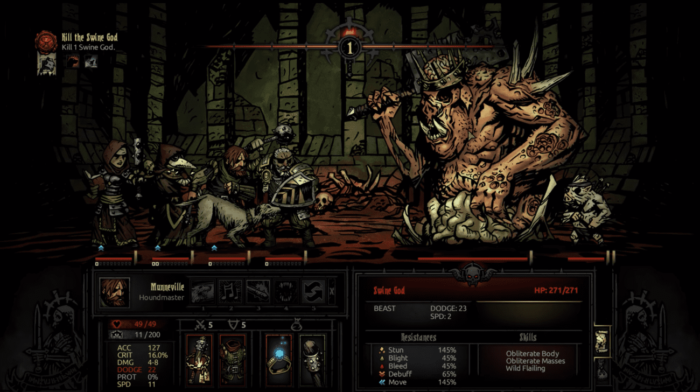 What work of horror is complete without some kind of monster? Darkest Dungeon boasts dozens of unique and horrifying enemies to test your mettle against…or run away screaming from. You’ll certainly do both before long.

Darkest Dungeon features some of the most hair raising boss fights in any game I’ve played for challenge alone. Beyond that, the game packs a host of boss monsters with blood chilling designs like the Swine God pictured above.

Throughout the game’s surprisingly varied stages you’ll encounter bosses uniquely themed around the game’s internal lore and environments. Each are terrifying for different reasons. Some are gore-festering nightmares of Lovecraftian ilk whilst others are twisted versions of typically benign creatures. Yet others are traditional horror staples like vampires, zombies, and knife-licking cultists; all with a thoroughly medieval aesthetic.

The game has hordes of lesser enemies to wear you down on the way to bigger fights and you’ll quickly develop grudges against the ones you hate the most. Regardless of the threat level you run up against, each enemy is beautifully crafted and super unique. There are even freaky minibosses that can randomly appear like the grisly Collector. Pro-Tip: If you meet him…run. 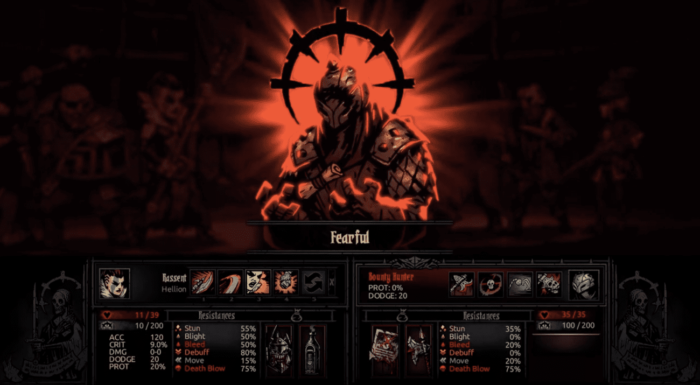 As scary as the monsters are, the Affliction System is really what gives this game it’s horror aspect.

The Affliction System is a set of mechanics in Darkest Dungeon that makes simple things like walking through empty hallways a serious threat. First, in addition to a health bar, characters are given a stress meter. When sanity stripping experiences befall your characters, their stress meters go up.

This can come from getting vomited on by a raving lunatic or something seemingly innocuous like walking in the dark for a little too long. The exact same level, even devoid of monsters, will be far more stressful for your heroes without light. You’ll only make the mistake of not bringing enough torches once.

Beyond the stress meter, there are diseases like Cholera and mental conditions like Cleptomania or specific phobias that can beleaguer your adventurers. If left unchecked, these conditions can worsen into forms of serious madness that will make your own best assets into hazardous liabilities.

Even relieving the Affliction system’s effects can be risky. De-stressing activities like Drinking or Gambling might result in a loss of coin or reputation, hitting the brothel without care can result in the contraction of a disease or the development of certain fancies that get your character banned.

Seemingly safer activities like prayer and meditation aren’t without their own dangers as your characters might develop religious delusions or guilt complexes that could cripple them in a moment of crisis.

Ultimately, the supremely psychological nature of Darkest Dungeon makes for literally killer gameplay and tons of decisions that will keep you on the edge of your seat. 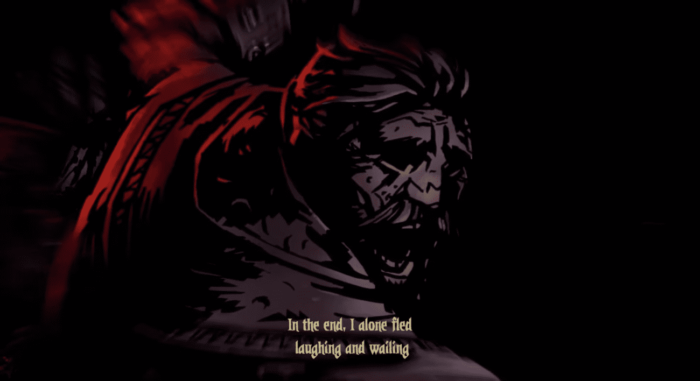 So much of what makes Darkest Dungeon such a smashing success comes down to raw presentation and style.

As I already noted, the music is fantastic, the art style even better, and the narration of Wayne June borders on indescribably good. I can only tell you to watch the trailer or the game’s intro and listen. Every time he speaks it’s a shudder inducing sensation, especially when you score a critical hit. Nothing gets my blood pumping like hearing an exultant “executed with impunity!” or a sinister “so… it bleeds”.

As the game goes on you’ll get further sucked into the devilishly macabre story and get spooked by the ever increasing madness. There are unlockable lore documents you’ll be itching to read before long and a graveyard you can visit to read the woeful tales of your previous heroes when they die.

Speaking of which, even the warriors who make up your team lean into the gothic feel of the game. Plague Doctors, Lepers, Crusaders, and Nuns join forces with foreign Occultists, Bounty Hunters, and Antiquarians.

Every inch of this game is dripping with medieval flare and drenched with a coating of gothic horror that would make the likes of an Edgar Allan Poe or Algernon Blackwood proud. 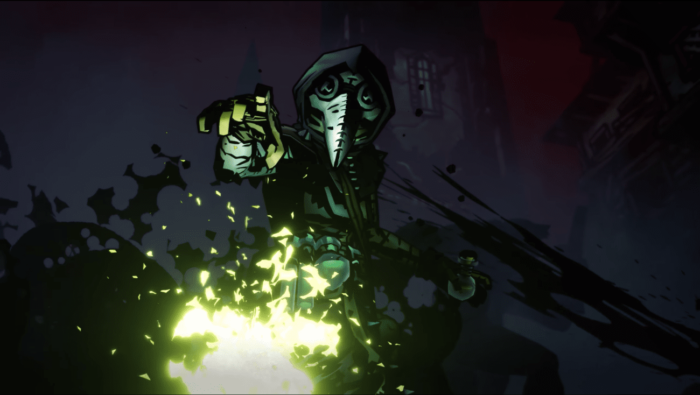 With everything I’ve already said, I couldn’t be more excited to tell you that Red Hook studios has a sequel slated to come out later this year, and that it already has an amazing trailer.

While we don’t know too much yet, information is starting to be revealed more and more often, including rumours of new classes and gameplay functions. Based on the trailer, it seems likely the game’s already dazzling artstyle is going to get a newer and more cinematic feel spiced up with some 3D animation.

Whatever the case, the first game is available on Steam, Playstation, Xbox, and Nintendo Switch for the insanely reasonable price of 25 bucks. You’re dead sure to get more hours of gameplay in on this than most triple A games these days.

If you like dungeon crawlers, medieval action, strategy, optimization, horror, or just a challenging gaming experience Darkest Dungeon is a must play. But be warned… without stalwart tactical acumen, fearless risk management, and adamantium mental endurance the game will beat you savagely.

If that scares you… good. Because the feeling of triumph that comes from emerging out of Darkest Dungeon battered and bloody but nevertheless victorious is unparalleled.