Grady Hendrix is an author I quite enjoy; what his debut novel Horrorstor lacked in a satisfying resolution it made up for with real novelty value, both in how the book itself was laid out (similar to an Ikea catalogue) and it’s fun twist on the haunted house setting (where the house is actually an Ikea rip-off store). Since then, he’s proven himself adept at reworking horror that’s come before into something that feels satisfying, heartfelt, and true to the genre. For me, My Best Friend’s Exorcism and We Sold Our Souls are his two best books (although his nonfiction book Paperbacks from Hell is a fantastic read as well). Both of those books took elements readers have seen before and turned them into something new. His latest novel, The Final Girl Support Group, doesn’t quite reach those heights, but it’s an enjoyable, well-paced thriller. 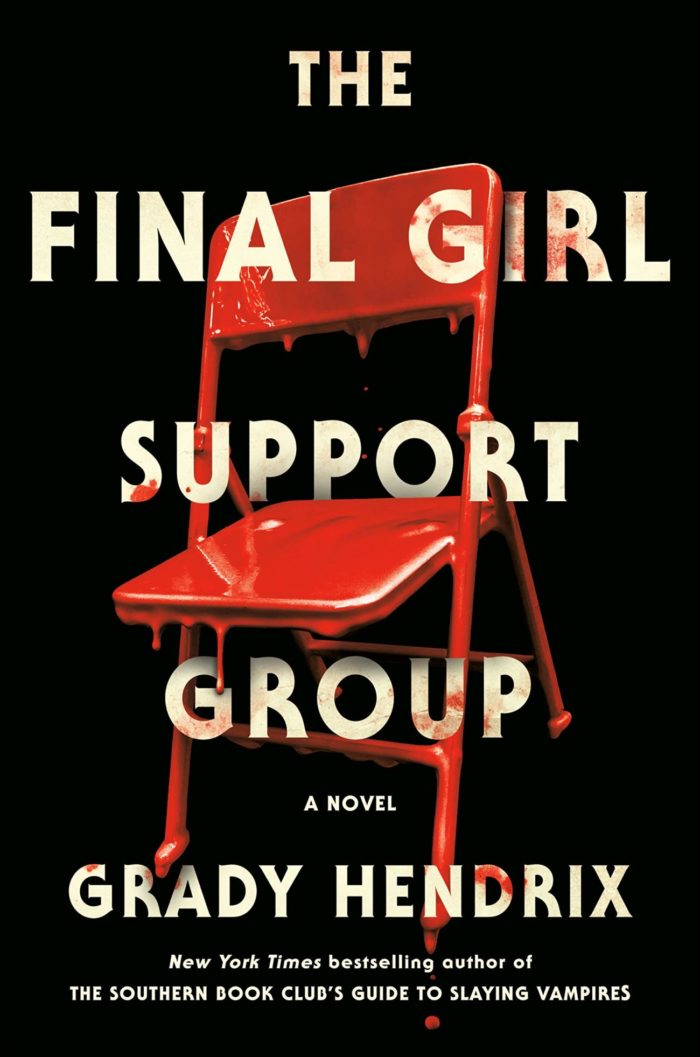 In the world of The Final Girl Support Group, slasher movies have actually happened and been turned into film franchises. The eponymous group is for those left over, the survivors of these incidents who have lived their lives constantly looking over their shoulders. It’s a neat concept, although we don’t get much of the actual group. The book spends about 30 pages setting the scene and developing the book’s narrator, Lynne. She herself has spent her life, since her slasher incident, training in self-defense and fortification techniques. She is quite reserved, and only feels comfortable at the support group. So when one of the final girls named Julia is shot in Lynne’s apartment, she immediately takes flight and sets out to find out who is trying to off the remaining final girls.

Slashers are, more often than not, a dime a dozen. There’s a strange fixation on the horror sub-genre, and I say it’s strange because if you watch most of the movies in it, you’ll likely be bored. Or, at least, I usually am. I enjoy a few cult classics—Sleepaway Camp is so unabashedly strange and trashy in equal turns that I can’t help but love it, and The Burning is everything people say the original Friday the 13th is with the added benefit of Jason Alexander’s ass, while Black Christmas and The Texas Chainsaw Massacre are a suspense-filled classics—but for the most part, I’ve felt severely let down by the ones I’ve seen. Something like The Mutilator or The Prowler will put me to sleep. Outside of some sadly brief instances of gore, those movies have very little going on. The characters wander around and occasionally one of them might die. There are some modern examples of the sub-genre that I enjoy quite a lot, but on the whole it’s rarely my first choice if I’m deciding what to watch.

I say this because a lot of the problems I have with the book are likely specific to me. I am completely aware that it’s an immensely popular sub-genre, and many count its most famous entries among their favorite movies. But for me, there has to be something extra that makes it all worthwhile. And The Final Girl Support Group has that. Hendrix keeps the pace up, so much so it’s tough to discuss the book without spoiling things. But without giving too much away, the actual plot seen through the eyes of Lynne is compelling and had me guessing until the final third or so. The answer to who is trying to off all the final girls is somewhat obvious, even though there’s an added wrinkle thrown in for good measure.

And Hendrix also excels at adding those wrinkles that make the story textured and interesting. Lynne is undeniably a victim, but we learn early on that many people don’t consider her to be a true final girl, and exactly why is unclear until about the halfway point. But suffice it to say that under the watchful eyes of the world, there are some who have judged Lynne for her troubled past and how she’s reacted to it. It makes Lynne feel fleshed out, and avoids the usual slasher pitfall of making its heroine a shining example of conservative values. She isn’t entirely clean.

It’s neat to see her interact with other people who have gone through similar experiences as her—smartly, Hendrix really toys with audience expectations. While I would hesitate to say that each final girl feels extremely well-developed; he does a great job of showing how they’ve all reacted to their own personal hells, and none of them are the same. For instance, Adrienne is the original final girl, and she wound up cutting her assailant’s head off with his own machete. See, her would-be killer believed his son drowned at the summer camp Adrienne worked at while the counselors were off having sex and partying. Instead of living in fear, though, Adrienne used the money she earned from her movie franchise and bought the camp out and turned it into a retreat for young women who have experienced emotional or physical trauma. Meanwhile, another final girl named Heather has gone almost the exact opposite direction, and she has turned to any kind of substance she can get her hands on to cope with her past.

It’s a smart move on Hendrix’s part. In real life, people react to trauma differently. Some people learn to live with it and even embrace it as a part of who they are. Others can never come to terms with it, and wind up suffering as a result. It’s a difficult fact, but it’s true (mind you, I’m not judging anyone one way or the other).

I will say that once the culprit is revealed, I came away feeling slightly underwhelmed. Weirdly enough, like many slasher movies where the killer’s motivations feel weak, I struggled to believe that someone would go as far as they did during the novel’s events. Is it snappy and enjoyable to read? Absolutely. But it really strains plausibility like a lot of slashers do. This does lead me to my biggest issue with the book, and this is what I meant that my problems with it are likely exclusive to me: it references the sub-genre to a fault, and to the point where I found it distracting.

Anyone even vaguely familiar with the horror genre will read Adrienne’s backstory that I put above and probably recognize it as almost a word for word retelling of the events of Friday the 13th.Sure, a couple details are changed, but in terms of the killer’s motivation, the way he dies, etc. it’s lifted directly from that original movie. There’s quite a fine line between homage and ripoff, and I think Hendrix might fall on the wrong side of it. We are told about most of the final girl’s backstories, and just about every one of them is just the plot summary for a famous slasher with a couple details changed. For me, I think this style of self-reference is played out. It was played out when Scream did it in 1996, which means it comes across as horribly dated in 2021.

I wouldn’t mind so much if the plot didn’t come to a screeching halt whenever Hendrix is ready to divulge characters’ backstories. Adrienne’s F13 knockoff of a life goes on for several pages, as do most of the other characters’ backstories. Sure, Hendrix adds some real-world dimension to the aftermath of these stories (like I said, Lynne isn’t necessarily as clean as she might seem at first), but it isn’t cute that he has so many “nods” to horror of yesteryear. The slasher, at this point in pop culture, has been deconstructed and picked to death more times than is probably necessary, to the point that even the most casual of horror fan who has never seen a slasher can tell you that Pamela Voorhees is the killer in the original Friday the 13th. It feels like a crutch in most works to make up for a lack of originality, and it comes across that way in The Final Girl Support Group.

I also take issue with the book’s overall message. Without getting too deep into it, the book is trying to comment on real-life crimes by applying a more realistic bend to the slasher story, and often shows males as a horribly toxic part of it. He’s definitely right, but it feels hollow when there’s a passage that seemingly criticizes the worship of fictional horror killers. Lynne mentions how there are legions of fan boys who wear the killers on their clothing, backpacks, etc. And if slasher movies were real, I would absolutely agree that merchandising of real-life tragedies is in poor taste. But slashers aren’t real. They’re fiction. Sure, there’s a bizarre part of the true crime community that seems to think that real life serial killers did nothing wrong, and those people probably need to seek out help. But it comes across as kind of a stretch when Hendrix criticizes the popularity of slasher movies. That’s how I read it anyway.

The Final Girl Support Group hasn’t usurped We Sold Our Souls as my favorite book by Hendrix, but it’s a brisk read with a compelling central mystery and character dynamics. It sort of combines the road trip feel of We Sold Our Souls with the social commentary of The Southern Book Club’s Guide to Slaying Vampires to mixed effect, and if you’re like me and are sick of horror constantly referencing the past, you may take issue with the way he develops the cast’s backstories. But it’s still an easy recommendation for horror fans, and I’m curious to see what he cooks up next.