I recently moved to a new loft and spent a ton of time searching for the right place that would be close to work, somewhat reasonable on rent, and in a decent neighborhood. Of course, I wanted an in-unit washer and dryer and air conditioning and the whole enchilada. You wouldn’t think that was a tall order in a well-populated town, but it was more difficult than I thought. So, when I revisited Burnt Offerings now that Shudder has added it to its library, I better understood why the family would take such an offer of $900 for the summer to live in a giant mansion for which they barely had to care. I mean, who could pass up that screaming deal, right? 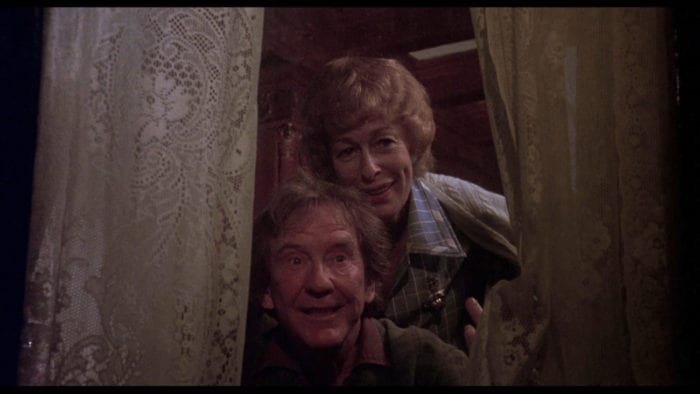 The movie begins with Marian (the iconic Karen Black) and Ben Rolf (Oliver Reed) touring the home of creepy brother-and-sister team, Arnold Allardyce (Burgess Meredith) and Roz Allardyce (Eileen Heckart). The duo wants to rent their sizable mansion for the summer, though we aren’t clued into why or where they may be going, and the Rolfs don’t seem to wonder either. The offer of $900 for the entire summer is made (for the right couple) and Marian is willing to sign immediately. Ben isn’t so sure. He says the house is too big for “his wife to care for,” a statement for which he deserves a swift kick in the back end. Yet, Arnold and Roz assure Ben that, “the house takes care of itself.” Hmmm…that’s not weird at all. Oh, and then there’s the matter of the old lady in the room upstairs. She is Arnold and Roz’s mother who is in her 80s but “doesn’t look a day over 60.” But don’t worry too much about her, she doesn’t come out of her room…ever…and all Marian will have to do is prepare her a tray of food three times a day and leave it in her sitting room. No big deal. I mean, that’s a totally reasonable thing to expect a renter to do, right? I guess Marian thinks so because the Rolf’s take the deal.

So, the Rolfs move into the home and everything seems absolutely wonderful. They see a wall full of photos of the house through the years and wonder why there are so many pics of the same home looking the exact same through the years—I don’t know, foreshadowing, maybe? Their son, David (Lee Montgomery), loves wandering the grounds, discovering a random graveyard in the backyard, and playing in the pool with his dad—until some weird feeling comes over Ben and he tries to drown David one afternoon while his Aunt Elizabeth (Bette Davis), watches from the sidelines. This whole drowning thing doesn’t seem to bother Marian and she insists that they stay at the house when Ben says they should leave. It was just an accident, after all. 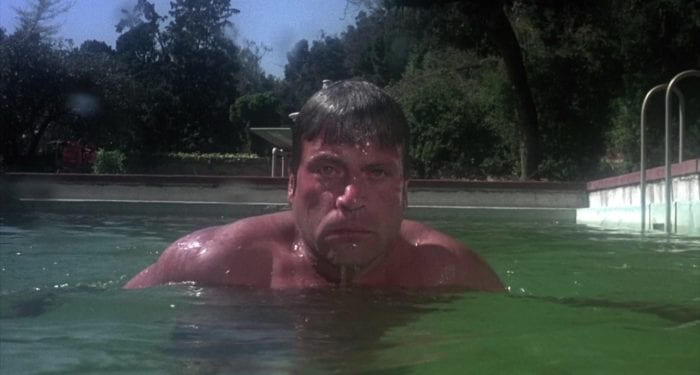 Marian seems to be falling more deeply in love with the house even though Ben seems to be becoming less and less himself, and Aunt Elizabeth seems to be getting older and sicker before their eyes. Once a vibrant, sarcastic, no-nonsense woman, Elizabeth’s hair is turning grayer by the second, and she is aging at a rapid rate. The house seems to be causing the rapid aging of not only Elizabeth but Marian, as well, and Elizabeth comments that Marian’s hair is getting gray and that perhaps she should see a stylist (such love and honesty in this family).

Oh, and as Ben is mowing and roaming the grounds, he begins having weird hallucinations and seeing images of someone’s funeral (one he apparently attended as a small child) and a super creepy smiling man (Anthony James) driving a hearse on the property. The man never speaks a word to Ben. He just smiles in a way that makes you want to shut your eyes and run away screaming. (I’m not kidding. I think I’m going to see this guy in my nightmares for weeks.) We never find out who this man is or whose funeral Ben is seeing and honestly, you don’t care. After seeing this guy a of couple times, you just want to never see him again. He is truly creepier than most of the evil slashers I’ve seen in my life, and he does nothing but smile. 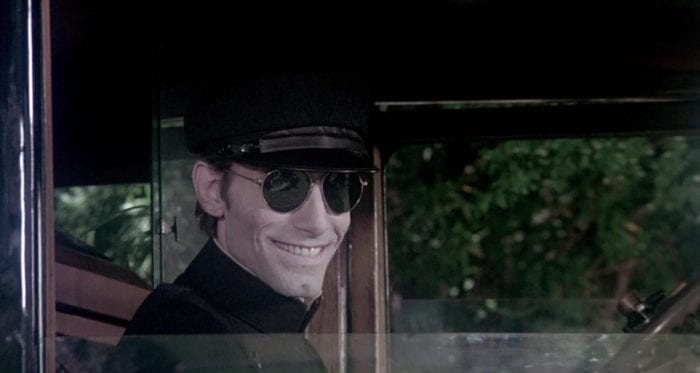 There are weird things happening in this house from the beginning of the movie, and it just keeps getting weirder. Between Marian becoming obsessed with the woman in the attic and the rapid aging of Aunt Elizabeth, the house (or something inside of it) is obviously taking hold of the family. Ben continues to push for the family to leave, and Marian fights him every step of the way. Did I mention that it seems that Marian is actually becoming the mysterious old lady of the house?

This movie is everything I love about horror films of the ’70s and ’80s. Screenwriters of this time didn’t overtly tell the audience much about what was going on in the films, there wasn’t usually a ton of blood and guts, and while the movies may not have been terrifying, they certainly made the viewer uneasy. Sometimes that is the best kind of horror.

I don’t want to say too much and spoil the movie for you because this is one of those movies that it really is best to go in cold. Let me just tell you, sometimes the house is the boss, and its inhabitants are no match.

There are a ton of unanswered questions in this film. Why is it called Burnt Offerings? Is the house haunted, or is it a manifestation of some past evil? Are the owners of the house into witchcraft? We don’t really know, and the writers aren’t telling. It is up to the audience to draw its own conclusions and, as I said, sometimes those movies are the most fun.

I’d love to hear your thoughts on the more questionable elements of the movie. Drop me a line and let me know what you think in the comments below.