When I sat down to watch Fear Street Part One: 1994, I didn’t know what to expect. I’ve recently started trying to go into new movies as blind as possible, so I purposely stayed away from a lot of the marketing for this film. I knew it was an R-rated supernatural slasher based on R. L. Stine’s Fear Street books, and I knew it would be the first in a trilogy of Netflix films, but beyond that, I didn’t know anything substantial. I was excited about the possibilities, and when I hit play on my screener, I felt like a kid on Christmas morning imagining what might be hiding under all that wrapping paper.

Directed by Leigh Janiak, Fear Street Part One: 1994 stars Kiana Madeira, Olivia Welch, Benjamin Flores Jr., Julia Rehwald, and Fred Hechinger. As the title suggests, it’s set in 1994, and it takes place in a little town called Shadyside, Ohio. In the film, Shadyside experiences a string of tragic murders about every ten years or so, and this particular story follows a group of teenagers who find themselves under attack by the supernatural force that carries those murders out.

As I said, I was looking forward to this movie, but unfortunately, it was a big letdown. There were two things that really drew me to it, and both of them fell pretty flat for me. For starters, I’m a ‘90s kid, so I was excited to see this decade get the nostalgic love it deserves. I wanted this to be a tribute to the years that shaped me, but that’s not at all what I got. Instead, this movie is essentially a bunch of Generation Zers plucked from the present and dropped into the ‘90s, and it shows.

Sure, Fear Street Part One: 1994 has a lot of the trappings of the decade, like the music, the technology, and a bit of the lingo, but I didn’t feel like I was really watching something set twenty-seven years ago. The characters don’t act like the kids I remember from my childhood, and it doesn’t have too many tell-tale ‘90s fashion styles. Admittedly, I can’t really put my finger on what exactly was off about it other than the clothes, but the ‘90s setting just didn’t feel authentic to me. 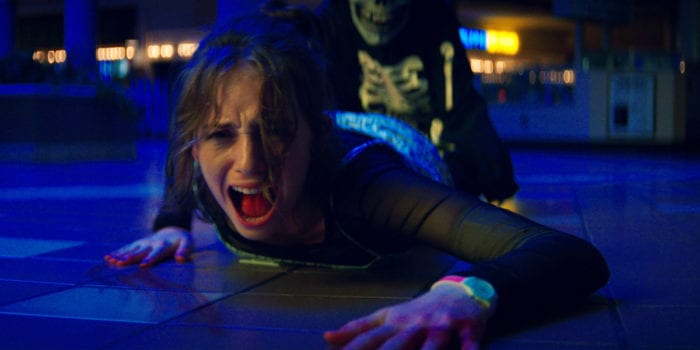 The other thing that drew me to this film was the supernatural component. I’m not a big fan of straight-up slashers, but I really enjoy movies that combine slasher elements with supernatural horror, like A Nightmare on Elm Street and Candyman, so I was looking forward to seeing what unique subgenre mashup this one would give us.

But again, that was pretty watered down too. It seems like there could be some interesting mythology here, but Fear Street Part One: 1994 doesn’t really get into any of it. It gives you the bare minimum of background needed to make the story work, but beyond that, the film pretty much just uses its supernatural element as an excuse to make the killer really hard to defeat. It’s more of a straight-up slasher than anything else, so if that’s not what you’re looking for, you’re going to be disappointed.

However, if you like slashers, I suspect that you’ll at least enjoy the kills in this movie. While it’s not an all-out gorefest, the film definitely earns its R rating, and I have to say that the final showdown between the killer and the teens was better than I expected. Without spoiling anything, I’ll just say that by the time I got to the third act, I thought the movie would hold back on the terror, but it didn’t. It’s a legit horror finale, and I at least appreciated that.

All that being said, the lackluster horror or the poor ‘90s imitation didn’t entirely kill the movie for me. I still could’ve enjoyed Fear Street Part One: 1994 if it had a good story or good characters, but unfortunately, it doesn’t, and that was the real nail in the coffin for me. The plot is little more than just an excuse to see some kills, and the characters are all pretty mediocre. Granted, they’re not stereotypes or walking plot points like in some other movies, but there’s nothing particularly likable about them either. 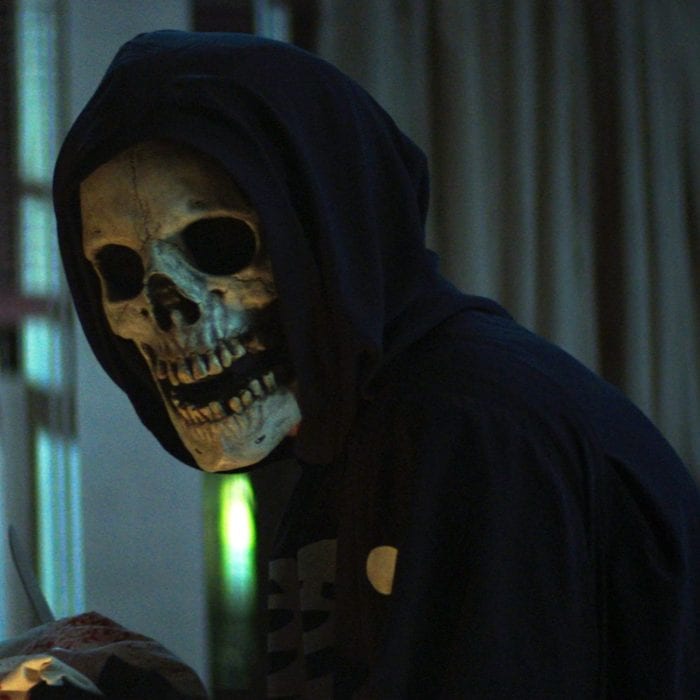 Surprisingly though, I’m still looking forward to the rest of the trilogy. After the teens defeat the killer, the last few scenes imply that their ordeal is over, but then the very end suddenly changes gears and lets us know there’s still more to the story. It’s the best part of the entire film, and it gives the impression that the next two movies might ditch the straight-up slasher model and delve deeper into the supernatural side of the mythology. I don’t know if that’s what will actually happen, but I’m keeping my fingers crossed.

In fact, if the two subsequent films go that route, and they end up being good, I might even change my perspective on this one. I might end up viewing it as just a fun slasher prequel to the real meat of the story, and I’d be totally fine with that. But since I haven’t seen the other two movies yet, all I can do is judge Fear Street Part One: 1994 on its own merits. And by those merits, it’s not very good.

It’s a pretty generic teen slasher that doesn’t utilize its supernatural elements nearly enough to make it interesting, and its ‘90s setting is a bust. So while slasher fans will probably have some fun with this movie, that’s really the best thing I can say about it. Otherwise, it might be worth watching if you want to cross your fingers and hope the rest of the trilogy knocks it out of the park, but I’d still suggest sitting tight and waiting for news about part two before you hit play on this one.