It’s been fascinating to find out how filmmakers have responded to the working conditions brought on by the COVID-19 pandemic. Some have focused on deskbound writing or editing, such as Charlie Steeds, who “used the lockdown time to get things finished” while others have found it to be a liberating catalyst for stepping outside of the box. Aaron Moorhead and Justin Benson will keep making films, no matter what their circumstances, and told me last November they were making one that involved just the two of them and a producer. So when I heard that Ben Wheatley had made In The Earth, a “pandemic film”, I couldn’t wait to see it. The wait was long, but it was worth it. Admittedly there were a couple of problems, but these were my problems, not the film’s. I’ll come back to that.

This story is about Martin (Joel Fry, Yesterday, Requiem) a naïve young scientist, hiking through a wild and unforgiving British forest to find his mentor Olivia (Hayley Squires, In Fabric, I, Daniel Blake) with experienced ranger Alma (Ellora Torchia, Midsommar, The Split) by his side. It’s about the journey, what happens when they meet with calamity along the way, and what happens when they reach Olivia’s camp. All this takes place during a pandemic that has had a drastic impact on the world, though it’s never clear (to me, at least) whether the pandemic of the film is an extrapolation of our real-life one, or something completely fictitious. The scientists in question are working on the viability of food crops, so I guess the practicalities must have been worse than toilet rolls running out.

Anyway, this ostensibly simple quest story naturally has some additional layers. Underneath the plot, there are themes of finding faith in ecology instead of people, of madness in the face of a crisis, and the nature of the sensory experience. On top of all that, there is gore (not massive, but horrific), nasty and realistic enough that I shut my eyes several times; some way over the top experimental use of sound; and some fabulously trippy visual effects. It’s almost as though Wheatley (both writer and director) had started with a basic four-person tale and then couldn’t resist turning up every possible element of the film as far as it would realistically go. 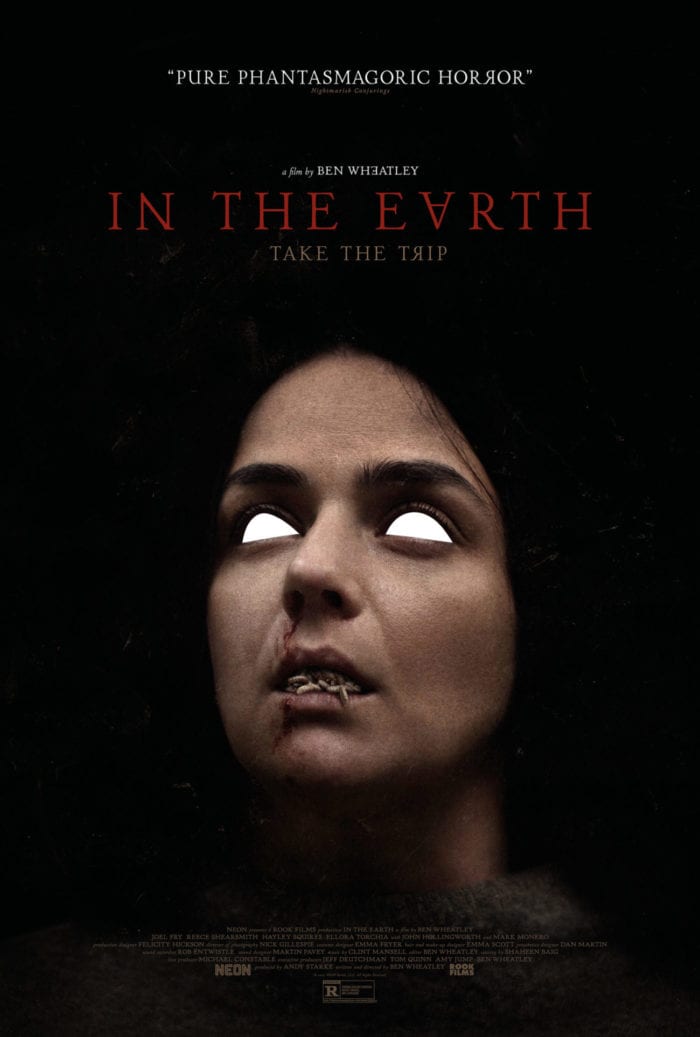 Yes, the essential plot involves four people, and I know I just listed three before. Zach (Reece Shearsmith, Inside No. 9, A Field in England) is the man that Martin and Alma meet along the way, living kind of wild in the middle of nowhere, communing with the forest spirit Parnag Fegg. He gives them sanctuary after the weird night they’ve spent, and a herbal cuppa…the rest just has to be seen. The introduction of Parnag Fegg near the start of the film is the first indication that In The Earth is going to be a so-called “folk horror”, and I’m happy to say Wheatley doesn’t sink his boots too firmly into any one subgenre here. The film presents civilised people resisting the influence of ancient standing stones and the legendary presence they represent—reminding one casually of films like The Wicker Man and The Ritual—but then it also jerks between sci-fi horror and occasionally slasher, like a compass that’s lost its magnetic north. In The Earth spins its audience around a number of times, so we can easily relate to poor Martin’s sense of being both lost and at a loss at how to move forward.

I’ve always admired Ben Wheatley’s films for authentic dialogue and an atmosphere perfectly suited to its story, no matter what the genre. So as I said earlier, when I heard Wheatley was making a film during the pandemic, I was excited: I figured it would present what this time has been like. It would feel real, no matter what the story. What he captures here (and I’d love to know how deliberate it was) is isolation madness, but he has flipped it from being an indoor lockdown to being alone in the wild. So although there is a sure “folk horror” atmosphere to In The Earth. There are no obvious witches or horned gods: the horror is more likely to be human than mystical, but who can say for sure? Senses are so messed up that the source of the madness is ambiguous: it could be mycorrhiza or the mycelium network throughout the ground affecting people; and if so, was that deliberate on their part or on the part of the unseen woodland spirit? Any or all of what happens in this film could be caused by people, natural science, or supernatural spirits: interpretation is everything. 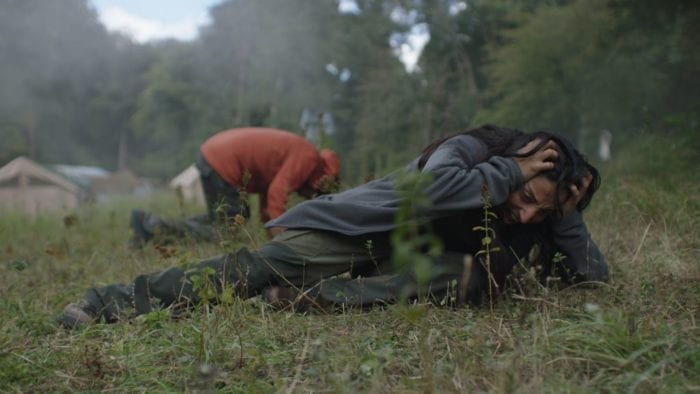 I’d seen all the key cast before (some more than others), and both Fry and Torchia keep the audience fairly grounded as their relatively rational characters progress on their quest. Fry gives his Martin the same dry realism as he presented in Yesterday, and it is interesting to see him lose his grip on that and weaken as a result. It’s possibly just a slight spoiler to describe Shearsmith’s Zach as madness personified, and it’s admirable how subtly and slowly he lets the mask of a gent slip.

Much more than the people and the story that I’ve already dwelt on so much, In The Earth is absolutely made by its sound and visuals. Not long before watching this, I also saw Ultrasound, which blends the soundtrack with sound design to a fascinating effect. This film’s team does something similar, but with a sledgehammer. The music by Clint Mansell (Moon, Black Swan, Black Mirror “San Junipero”) is grinding at times, later melodic, and often hypnotic, then taken over by the huge tones broadcast across the wild woods with Olivia’s speakers, in an apparent attempt to communicate with the very substance of the Earth. Combine the impact of all this sound with the intense visuals towards the end which would be perfectly fitting projected onto the walls of an all-night rave, and what we have is a fabulous sensory overload, as though Wheatley wanted the experience to be intense, to compensate for the restrictions we’ve faced for more than a year. Director of photography Nick Gillespie allows the primeval journey to develop slowly, mind you. There is awe for the forest throughout, along with close-ups (both beautiful and sickening) of countless aspects of woodland experience.

Some viewers have complained about the “slow burn” style of In The Earth. To me, this wasn’t a problem at all. The problems I had were a couple of factors that pulled me out of the film. Firstly, I struggled to believe that there is any forest to be found in this country (the United Kingdom) that requires at least two days of walking to get to its core. Secondly, I was rather too familiar with some of the cast. Hayley Squires had left such a strong impression when I watched I, Daniel Blake that I almost expected her to protest about benefits when she opened her mouth. The more difficult association I felt was with Reece Shearsmith: although I’ve seen him play so many characters in Inside No. 9, something about the way he cocked his head during his first In The Earth scenes brought me right back to his Papa Lazarou in good old League of Gentlemen.

Despite all that, though, I adored In The Earth. Overall, it was a gluttonous feast for the senses, and even though it was more than enough, I left the cinema wanting to see it again the next day. This is one of the few films of 2021 I’ve seen so far that I will be buying when it is available on home release.