Horror films do so much for their adoring and committed fans. They provide escapism for some, validation for others; they explore the realms of “what if?” and “what else?”—satire, allegory, and fable. They explore difficult areas so that we can feel understood and seen, and they deep dive into emotions that are better off experienced after a safe dummy run. Show me another genre that can deliver all of that.

An Unquiet Grave is a tale about grief. Sure, some famous films already delve into that most painful emotional experience, such as Pet Sematary, The Babadook, and Don’t Look Now. What sets An Unquiet Grave apart is its simplicity, though this doesn’t minimise the characters’ journeys or dismiss any of the genre’s heritage.

Jamie (Jacob A. Ware) has been mourning his beloved wife Julie for a year and—as in the folk song—simply cannot let her rest. He has decided and found a way to bring her back, and he has enlisted the support of her sister Ava (Christine Nyland). Ava is initially reluctant and her conviction somewhat unsteady, but both miss Julie (also called Jules) so much that the plan is set. Of course, neither of them quite knows what they are walking into.

Pet Sematary naturally sprang to mind several times as this story unfolded. In fact, right near the start, when it became apparent what Jamie was planning, I could hear Jud Crandall warning, “Sometimes dead is better.” If Jamie had read the book or watched one of the films, he would still have ignored the old harbinger, though: his is a single-minded and selfish grief. In that way, An Unquiet Grave also raised echoes of The Brain That Wouldn’t Die, in which it was equally apparent that the departed woman had no say in her fiancé’s plan for her.

All of these titles I’ve referred to form a deep and strong foundation for this film; so if it’s originality that you seek, you’re not likely to find much here. Instead, director Terence Krey takes the established components, and without unnecessary detail or explanation, adds layers of atmosphere to the sparse story and emotional expression to the unfussy characters, while the writing explores some complex themes with apparent ease. Let me explain. 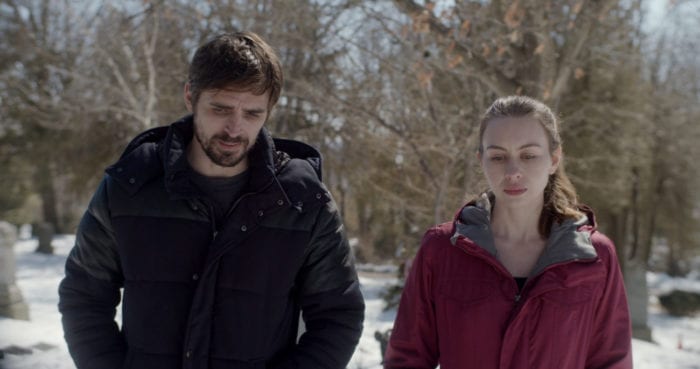 As the film opens, Jamie is waiting for Ava by his late wife’s grave; he’s not waiting patiently, as she is late, and he’s got so lost in his sorrow that he jerks up and snaps when Ava arrives. These first few minutes, made up of a stiff conversation in several contrasting parts, perfectly sum up the stark difference between the two characters. Jamie only maintains a relationship with his sister-in-law because of his own agenda and barely acknowledges that she is hurting too. Ava raises personal thoughts and anecdotes at seemingly random moments, as though it is in her nature to seek a genuine connection. Thus a simple introduction leads the way to two parallel themes: grief is rarely shared, as many people feel and express it from their own perspective alone, and a male trait is to determine the purpose of the women around them, often without consideration of those women’s views or needs at all.

So considering An Unquiet Grave is about a man’s handling of his bereavement along with the feminist issues it raises, it feels apt that it is “a film by Christine Nyland and Terence Krey.” She plays Ava, after all, and provides a cautionary commentary about Jamie’s plans and his attitude, and Krey is the director who ensures that none of this is overdone. The issues above are demonstrated, rather than spelled out. For example, the first memory of Jules that the two share demonstrates his wife knew him to be somewhat controlling, but Ava doesn’t say it in those terms. We see what is happening as it happens, rather than being given the full plan with background and exposition as well. There is no time for this (the film is significantly shorter than 90 minutes) in the focused nature of the writing, just as Jamie doesn’t tell—or even find out—any more than truly necessary.

And yes, there are only the two actors on screen for the whole duration, and they are both remarkable. Nyland has an exceptional range to present over the course of An Unquiet Grave, and whether it is hope or trauma, everything comes across as both genuine and realistic. Ware plays Jamie with all the (utterly reasonable) pain drawn all over his face, and so it’s easy to sympathise with him. When it becomes apparent he’s keeping some things bottled up, it appears to be a stoical reserve which, again, is normal enough to be credible, especially in its light of Ava’s encouragement to talk. 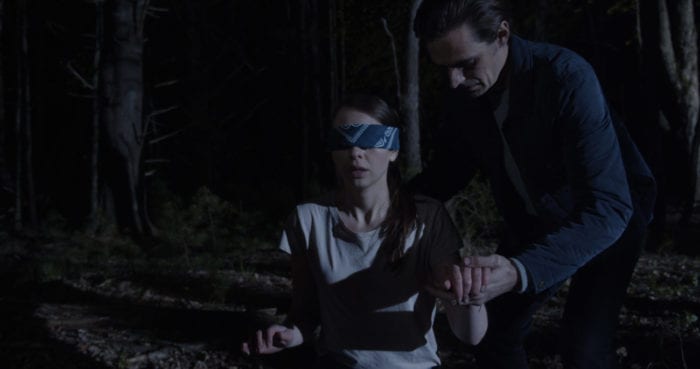 Funny: because An Unquiet Grave is such a sparse and (on the surface) simple story, I didn’t think I’d have this much to say. I do need to expand on what I mentioned about the atmosphere, though. This film is about characters and feelings after all—not action, and so it might have run the risk of being too slow without the right mood. In An Unquiet Grave the mood is “tense.” From the start, we can tell that something is already wrong, and something is going to go more wrong, but just how wrong is unknown. Apart from the pre-title prologue, the majority of the film takes place at night-time (and much of it in the woods), and Director of Photography Daniel Fox handles the darkness well. This isn’t like Willow Creek or The Blair Witch Project where hardly anything is visible, but rather it is the perfect setting for a horror mystery. Then to round off the film’s successful tone, there is Hugo Lopez’s score. Sometimes it is a simple background hum, then when the time is right, that hum develops into a hopeful synth.

An Unquiet Grave is a film that turns the old folk song into a modern fairy tale. Where fairy tales tell you everything that happens and let you imagine what those events look like, this one is the opposite. We see everything—the ritual, the corpse, the anguish, the reconciliation—and so there is little we need to be told. I for one don’t need the film’s lesson to be spelled out. It’s clear to me: this is what bereavement looks like, and if I ever have to go there, I’ll surely handle it better than this poor Jamie.