When you think of Japanese horror, one of the first things that probably comes to mind is Sadako from Ringu (1998) or Kayako from Ju-on: The Grudge (1998). What they have in common, along with many other ghostly figures in Japanese horror, is that they are pale women in white dresses with long, black, messy hair. Their appearances and characteristics are based on figures in Japanese folklore known as yūrei, ghosts who typically appear dressed in white with long, black hair.

To be more specific, the likes of Sadako and Kayako are inspired by the onryō, a specific kind of yūrei that’s motivated by a need for revenge instigated by acts of wrongdoing against them in life. These types of ghosts are common in Japanese horror, and can reliably incite fear in Japanese and Western audiences alike, but why do we find them, and their hair, so terrifying? 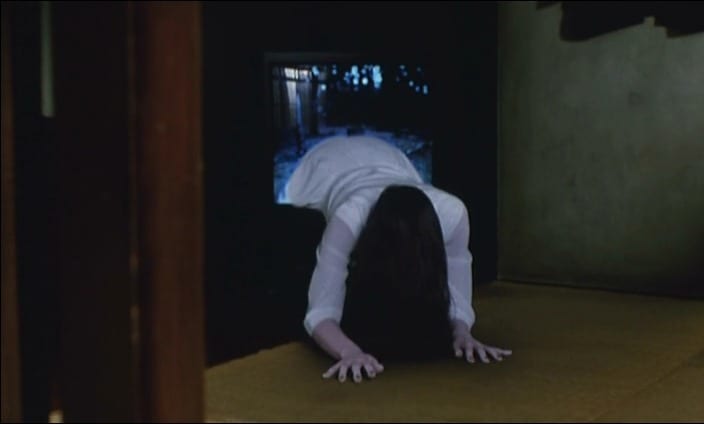 The smell of the body causes the men to recoil, although they already seem unnerved by the sight of the hair alone. When the body is taken to the local coroner Yamazaki (played by the late Ren Ôsugi), he cuts open the woman’s stitches, shocked to find that a clump of hair immediately sprouts out. Yamazaki develops an obsession with this hair and instigates the events of the film by distributing it around local hair salons as hair extensions.

Although the hair itself is the main source of horror in the film and causes the actual deaths, Yamazaki can be seen as the true antagonist because of the way he seeks to control the hair and use it for his own purposes. Even at the beginning of the film, the parallels with social expectations of female body hair (namely that it should be removed) are evident. In one of his first scenes with the deceased woman, Yamazaki says “all dirty women have to do something about their filthy hair.”

The origins of the supernatural hair aren’t fully explained, but in flashbacks, we see that the woman was a victim of illegal organ harvesting, and during the procedure symbolically had her hair shaved off by a group of men. It’s implied that the hair stored within her body grew as a replacement for the stolen organs, its vengeful powers born from a violent experience, just like the onryō itself.

In this way, the origin of the deadly hair in Exte: Hair Extensions is horrifying in two ways: firstly, because the visual shock of seeing vast amounts of hair sprout from a wound is automatically unsettling, and secondly, because the context of hair growing from where it shouldn’t on a specifically female body transgresses social norms in a way we’re not used to. 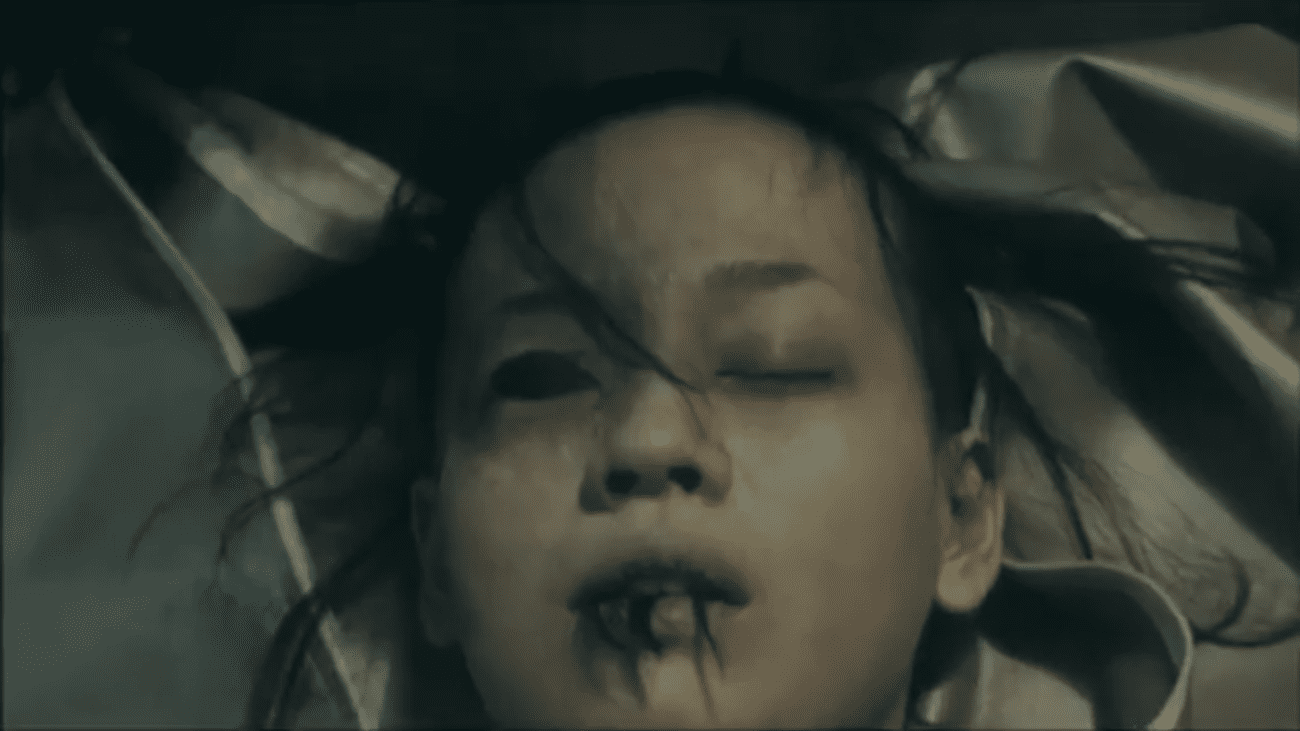 In general, long hair is seen as feminine, and a desirable trait for women to have. On the other hand, if a woman has too much hair, or has it in the wrong place, it instead becomes a marker of social rebellion, something to be looked down upon. This is particularly evident when it comes to Japanese attitudes towards hair. In Japanese folklore particularly, long unruly hair has connotations with loose morals, whereas shorter, neater hair is indicative of cleanliness and respectability.

The idea of a woman’s hair existing outside these norms, therefore, indicates divergence from patriarchal expectations, and the same can be said of most other cultures when it comes to body hair. It follows then that the female body overflowing with hair in Exte: Hair Extensions —and the unruly locks of Sadako and Kayako—are not only sources of horror, but exaggerated symbols of female transgression, particularly when considering their position as vengeful entities.

Exte: Hair Extensions has a rather goofy tone throughout, it is a Sion Sono film after all, but the body horror is just as effective as any other staple of the genre. Casting sociological analysis aside for the moment, there’s no denying that the sight of hair spilling from empty eye sockets and opened mouths is especially grotesque.

Those are places where hair doesn’t naturally occur on anyone’s body, nor in such large amounts, and thinking about it happening to you is sure to be cringe-inducing. One scene that made me squirm around was when one of Yūko’s co-workers who has received the possessed hair extensions begins to realize her body is being taken over.

As she inspects her face in the mirror we see a long strand of hair poking directly out of her eyeball, which she then proceeds to pull out. It might not seem like the absolute pinnacle of gross-out horror, but something about hair growing out of your eyeball really got under my skin. The situation only gets worse from there when she opens her mouth, revealing another clump of hair covering her tongue. This was equally nauseating for me as something that more than anything would just be extremely irritating, and then truly terrifying as you realize there’s no way to get rid of it.

Perhaps that’s what makes hair in this context so unnerving; even in real life, there’s something unsettling about hair disconnected from the body, the way it gets everywhere, and suggests a breach of hygiene. When you pair that with the hair invading your body and spilling out in all the places it shouldn’t, blocking your orifices, it becomes surprising that more people don’t choose to explore body horror in this way considering how effective the pairing is.

Another impressive thing about Exte: Hair Extensions is the way it examines how one’s relationship to their hair may be altered by abuse. Yūko’s sister Kiyomi (Otake Tsuzumi) is established as an unreliable and dangerous person, and when Yūko realizes she’s been physically abusing her daughter she starts looking after the young girl herself with her roommate Yuki (Megumi Satô).

When left alone in their apartment the girl, Mami (Miku Satô), passes the time by haphazardly cutting the hair on Yūko’s practice head mannequins, perhaps trying to emulate the latter’s job. Later on in the film, the women at Yūko’s hair salon (ironically named Gilles de Rais) give Mami a haircut. It’s one of the only moments in the film where she seems genuinely happy, whilst in other scenes she remains silent or cowers away from Yūko, fearing more abuse.

The relationship between Yūko and her niece is especially heartwarming, with Yūko having to earn her trust but ultimately forming a tight bond. A major reason for their bonding is their discussions of hair, and how Yūko herself decided to pursue hairdressing after a pleasant and affirming experience having her hair cut. Hair is therefore recontextualized from its horrific presence in the film as a site of reclamation and empowerment via transformation. This empowerment is a double-edged sword, however, as Yūko realizes that the hair extensions they gave Mami during her makeover were of the possessed kind.

Things come to a head when the aforementioned hair-crazed Yamazaki asks Yūko and Mami to stay with him and, following their rejection, cuts off a lock of Mami’s hair. This act of anger backfires on him however when the possessed woman, reminded of the man who killed her, rises up and decapitates him with a long strand of hair. This ending reinforces hair as the symbolic conduit for female vengeance in Japanese horror, striking down the man who consistently fetishized it and sought to use it for his own means. 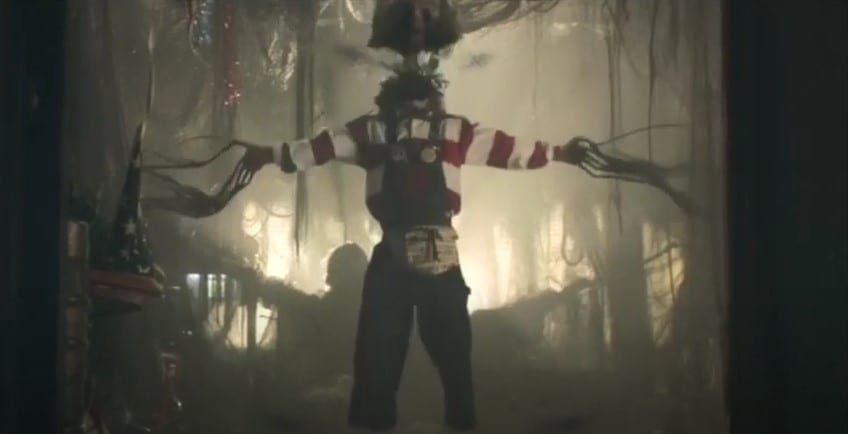 Finally having her desire for revenge satiated, all the hair flowing out of the woman’s body is recalled and disappears from sight. It’s interesting that despite the hair saving the day, it still has to disappear for the happy ending to be established, confirming that the social expectations of well-kept hair have been reinstated and all is well.

Nevertheless, Sono’s Exte: Hair Extensions remains subversive in its exploration of female hair, and adds to a canon of horror putting long-haired, scary women at the forefront. Another story of this kind can be found in the Japanese horror anthology film Kwaidan (1965), where the short “The Black Hair” features a scorned lover who attacks her ex-husband with her long, black hair for leaving her for another woman. Elsewhere, in Greek mythology, we can look to the tale of Medusa as an example of horrific hair that threatens to break social boundaries.

With all of these stories, we can see how the trope of ghostly women with impossibly long hair in Japanese horror does more than just look creepy. It targets very specific and deep-seated cultural anxieties surrounding uncontrollable female hair. Considering that the body horror subgenre also targets subconscious fears surrounding the body, it’s no wonder that the two paired together make such an interesting combination.