Japanese horror is often unique in that it’s less about the literal danger and more about the fallout surrounding a given haunting. In my experience, supernatural Japanese horror takes the form of a phenomenon, almost a force of nature that we haven’t seen or discovered before. And for the most part, I quite enjoy that. It’s what makes the low-key nature of something like Noroi: The Curse just so effective; the danger is a very real but also intangible threat, one that will consume you, given enough time. It’s what makes other Japanese horror stories like Corpse Party, Another, and anything by Junji Ito just so effective. It’s a large part of why I was excited for Cassandra Khaw’s Nothing But Blackened Teeth, a horror novella that uses Japanese folklore to mixed effect.

The premise is as old as the horror genre itself. A group of five twenty-somethings all travel to Japan to hold a secret wedding ceremony in a Heian-era mansion. The place has a gruesome history; the matriarch of the house was buried alive after her husband left her at the altar. Since then, people have buried other women alive in the mansion’s depths to appease the restless, uneasy spirit of this ghostly bride. This being a horror story, supernatural shenanigans ensue, and the relationships are tested. 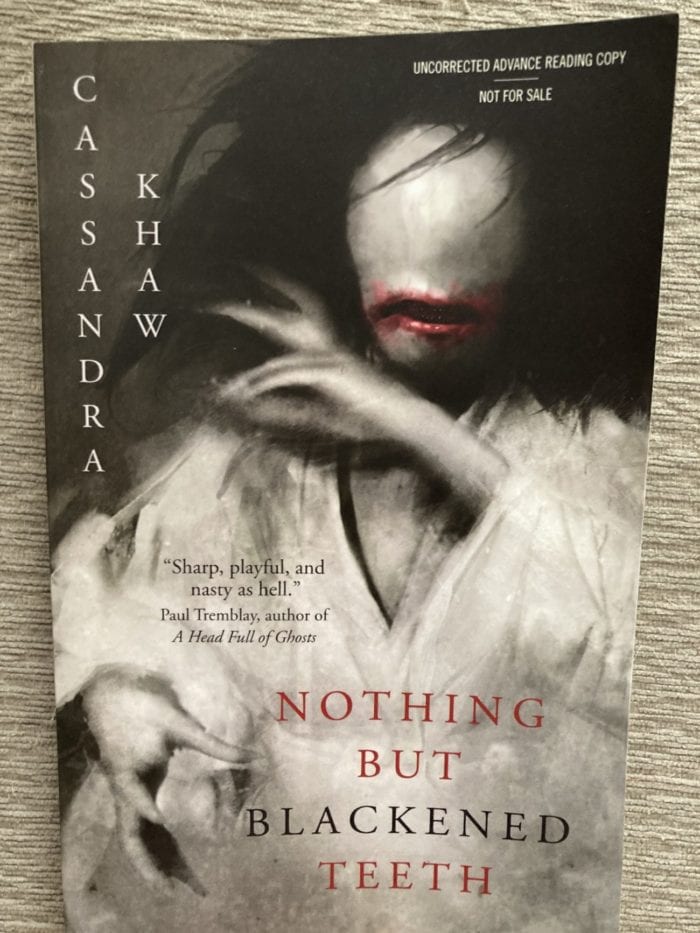 The most interesting, and frustrating, thing about Nothing But Blackened Teeth is that it attempts a lot, and I mean a lot, of different storytelling tricks. It’s a young-person slasher story, a Japanese-flavored horror story, and an attempted meta-text on toxic relationships. See, similar to something like Shirley Jackson’s classic Haunting of Hill House, much of the darkness is derived from the main cast and their relationships. We find out early on that the two soon-to-be-newlyweds actually have a history with the narrator Cat; she once had a thing for both of them, and there was some grand event that led to a brief falling out between everyone. As a result, Talia, the bride-to-be, harbors a deep loathing for Cat. Meanwhile, Phil, the wealthiest friend among them and the one who got them into the mansion, also had a brief fling with Talia. Basically, this friend group is incestuous and none of them really like each other.

Meanwhile, the joker of the group, Lin, constantly makes observations about what’s going on around them. At one point, he straight up tells Cat that they need to get the hell out of there since she’s bisexual and he’s the comic relief and as such, they are likely the first to go. I’ve written before about how I personally don’t care much for this style of fourth-wall-breaking commentary, and here it completely removed me from the story. It happens infrequently enough that I wonder what it’s even doing there, to begin with. It clashes with the spooky tone the book is going for.

A lot of the book’s run time is spent on these flawed interpersonal relationships, and it’s here where my biggest gripe with the book pops up; it’s simply too short. This story could have been beefed up to maybe 200 or so pages, and I think it would have helped me connect with the characters more. As it is, we never find out exactly what happened in the friend group to put them at each other’s throats, and the horror elements start off slow before basically ramping up to a hundred miles an hour in a way that feels oddly paced. It’s very difficult to explain exactly why this didn’t work for me without spoiling things, but I’ll try. I have no problem with short books, either; some of the best stuff I’ve ever read have been novellas or even short stories. I’m a firm believer that a good story is exactly the right length, that page or word count has nothing to do with a story’s quality.

To me, the best haunted house books skillfully mix supernatural elements with realistic character flaws. The Shining is a classic haunted house novel because it’s as much about Jack’s alcoholism and his inability to reconcile his own dark past as it is about the Overlook Hotel’s own troubled history and restless spirits. Ditto Haunting of Hill House, which can be read into in a variety of ways. The supernatural elements are there, but mostly in the background. Nothing But Blackened Teeth definitely tries to be this kind of story, but the short length doesn’t let the story reach its full potential.

Again, without giving too much away, the ending feels extremely abrupt and leaves me pondering what I was supposed to take away from the whole spooky ordeal. Maybe that was the point; the survivors are deeply flawed, and maybe I’m supposed to believe they were made that way from their toxic relationships. As it is, it’s clear that it was trying to subvert expectations with slashers of this nature, but I don’t know how warranted the outcome was.

The main monster at the story’s center, at least, is quite creepy. The cover makes no attempt to hide this book’s boogeyman. The mansion is haunted by a Yokai known as an ohaguro-betarri, which, according to its entry on the Yokai wiki, is basically a jump scare in ghost form. These spirits are often brides who have been wronged in some way and exist to scare men who try to help them while they’re disguised as regular women. According to this entry, they don’t actually cause harm, and the book molds this by making the ohaguro-betarri more mischievous than straight-up murderous. There are a couple of pretty creepy scenes featuring chilling descriptions of her perverted form.

Nothing But Blackened Teeth attempts a lot of different things in its brisk 120-page length, and I don’t actually know how successful it is at a lot of them. It’s possible I missed something. I read the entire thing in one long sitting, and I’m sure there are details that I missed. What I took away from it is that it’s an ambitious but very flawed horror debut from Cassandra Khaw. She has a firm grasp on setting and mood, and I think she’ll refine these strengths in future works. I’m very much looking forward to seeing her grow as an author. For this particular book, I think different readers’ mileage with it will vary depending on their personal tastes.

It’s got one hell of a cover, though.

A copy of Nothing But Blackened Teeth was provided by publisher Tor Nightfire via NetGalley for the purposes of this review. The novella is expected to release on October 19, 2021.

“Chasing the Boogeyman Is Genre-Bending Genius”

“Sixteen Horses Is A Chilling Debut”