2021 seems like it’s shaping up to be the year of simple horror setups. Movies like The Night, The Vigil, and even Saint Maud to some extent have been almost entirely about one or two people in a single location, and now we can add another title to that list: Morgue. Directed by Hugo Cardozo and starring Pablo Martínez, this Spanish- and Guaraní-language film is all about a guy who spends a night alone in a morgue, and pretty soon after he gets there, he begins to experience some terrifying supernatural phenomena.

The main character in this story is named Diego, and he’s kind of a jerk. Actually, scratch that. He’s a huge jerk. He only cares about his girlfriend when they’re going to have sex, he steals from his local supermarket, and he lies to make people think he’s better off financially than he really is.

But those aren’t the worst things about him. In the first act of the film, Diego adds a truly heinous crime to that already damning list of vices. On the way to his girlfriend’s house, he takes his eyes off the road for way longer than anybody ever should, and he hits a pedestrian. He immediately gets out of his car to see what happened, and when he finds that the guy he hit is dead, he just drives home and goes to bed. He doesn’t tell anyone about the accident, he doesn’t go to the police, and he doesn’t even tell his girlfriend that he’s ditching her. He just runs away and hopes nobody finds out what he did. 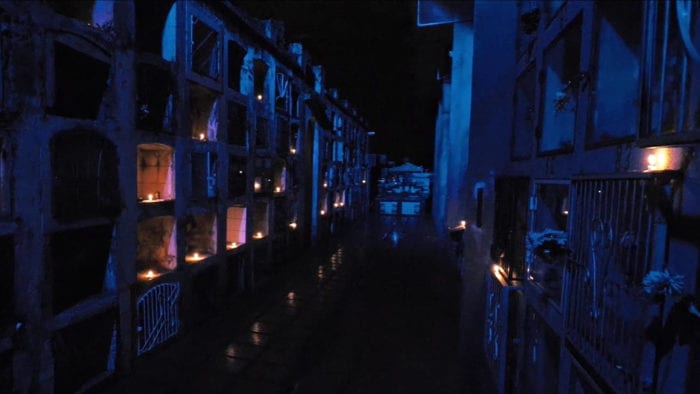 Later that night, Diego receives a call from his boss telling him that he needs to fill in for the overnight security guard at a local morgue, so he gets dressed and heads over to make a few extra bucks. When he arrives, there’s only one body there, and it’s a man who died in a hit and run accident. You immediately know it’s the guy Diego hit, so you can guess that the supernatural forces in this place are going to mete out the justice Diego thought he could escape.

And when those forces begin their work, the scares start out pretty low-key. Things like cups and doors move on their own, and mysterious figures sometimes walk across the screen behind Diego, but nothing jumps out at you and demands your attention just yet. It’s all a bit subtle, and it’s pretty effective. You know these things can happen at any time and in any part of the frame, so it forces you to constantly scan the screen to make sure you’re not missing anything. Even when Diego’s doing something simple like sitting down and checking his phone, you can’t rest for a single second. You’re always on the lookout for the next subtle scare, and this creates a thick atmosphere of anxiety and dread.

It’s a great setup that promises even better things to come, but Morgue never lives up to that promise. Instead, it takes a steep nosedive in quality once the terror picks up speed and the ghosts start to get in Diego’s face. The film becomes little more than a cavalcade of scares, but it’s not that scary. It often feels like it’s just a bunch of ghosts jumping out at Diego and then disappearing, and you soon realize that he’s not in much actual danger. The scares don’t have any real teeth, so it just gets boring after a while. 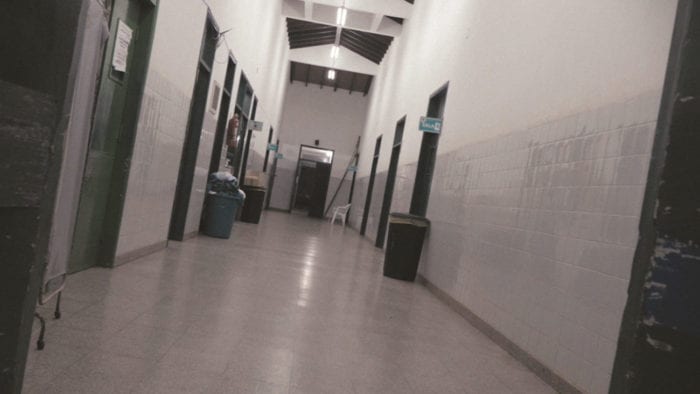 That being said, I might’ve been able to overlook the weak scares if this movie had something else to fall back on. If it had great characters or a great story, they might’ve tilted the scales back towards the positive side. But it doesn’t. This is a super simple narrative that doesn’t have much depth, and the only substantial character in it is pretty thin apart from the fact that he’s a terrible person. The film stands or falls on the strength of its scares, so their ineffectiveness in this main part of the story pretty much tanks the entire movie.

After that descent into disappointment, you’d probably expect Morgue to go out with a whimper, but it actually redeems itself a little bit with a cool twist in the final scene. I don’t want to spoil it for you, so I’ll just say that it adds a bit of welcome depth to the story and makes for a satisfying conclusion. But unfortunately, it’s too little too late. At that point, the movie had already lost me, so even though it ended on a good note, I still couldn’t get over the parts I didn’t like.

All in all, I’d say that Morgue is a mixed bag. On the one hand, I thought the weaknesses outweighed the strengths, so I can’t call it a good movie or recommend that you watch it. On the other hand, I have to admit that it’s not all bad. It has some pretty good parts that I enjoyed quite a bit, so I also wouldn’t call it a waste of time or discourage you from giving it a shot if you really want to see it. I walked away pretty disappointed, but it’s not so bad that I think everyone else will too. Just manage your expectations if you do decide to check it out, and at the very least, you’ll be able to appreciate the things this film gets right.

Morgue hits theaters and VOD on May 11.