From the moment the 2021 Chainsaw Awards began to stream on Shudder TV, I knew I was in for a frighteningly fun time. In contrast to that other film awards show that shall not be named, the Chainsaw Awards took place remotely, meaning the hosts, presenters, and award recipients were all tasked with filming their own acceptance videos, and the results were charming.

Before we go any further if you missed the live show be sure to check it out here, then come right back so we can chat about it! Especially the amazing musical performance from Smiling Beth!

David Dastmalchian did an inspiring job as our ghostly host, starting off the show with a spoof of the film Host. In fact, the idea of Dastmalchian and his vampiric roommate Dr. Fearless coming back to host next season could be the start of a wonderful, spooktacular tradition.

Though the Chainsaw Awards had a truly homey feel about them, the show still shined bright with star power! There was a great moment near the finale when Jamie Lee Curtis presented the award for Best Lead Performance from her shower, harkening back to her mother’s iconic horror scene in Psycho. 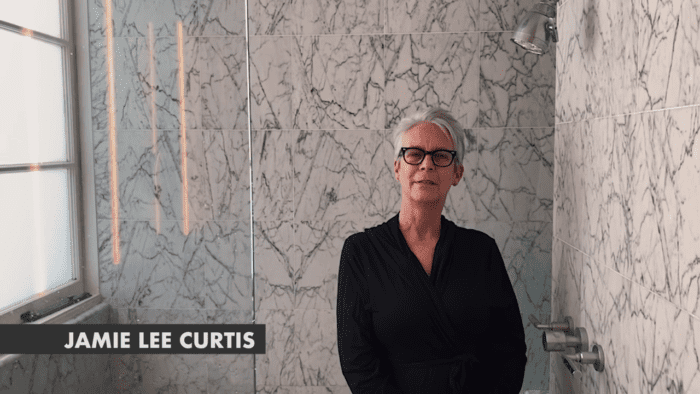 I’m here representing the Fangoria Chainsaw Award for Best Lead Performance, and yes, I’m talking to you from the shower. I spend a lot of time in the shower. I think about my mother, and I wish she was here. And if it wasn’t for a shower, she would be.

Keith David (The Thing) kicked off the scaremony with the reveal of Clancy Brown (The Shawshank Redemption, Spongebob Squarepants) as the best supporting actor for his role as Montgomery Dark in The Mortuary Collection—a film that I panned in my review but praised for Brown’s fantastic performance. 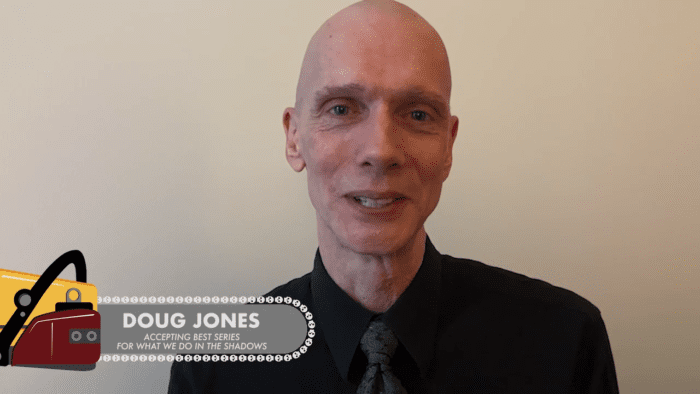 Of course, Dastmalchian wasn’t the only host that would go on to earn praise in the evening. Joe Bob Briggs himself made an appearance to accept Fangoria’s first-ever award for Achievement in Non-Fiction for his role as host of the popular Shudder exclusive The Last Drive-In with Joe Bob Briggs.

The other host that walked away with a chainsaw-embedded-skull was Rob Savage’s brilliant film Host. No nominee better exemplifies the unique times we live in than this streaming séance. The spirits were high for the reveal of Best Streaming Premiere, and the cast of the film managed to Zoom-bomb the awards show. 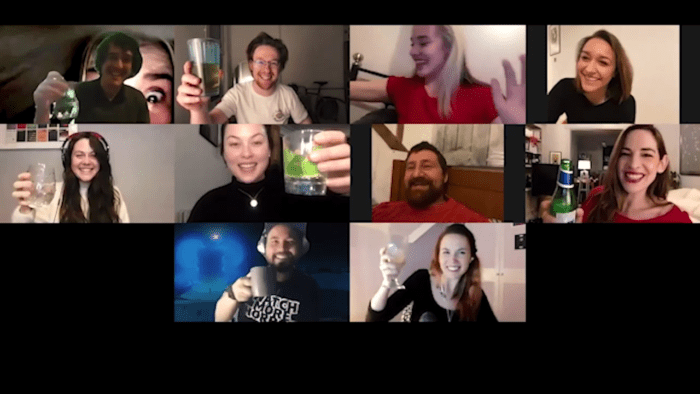 The night featured films and talent from around the globe. However, there were three nominees that walked away with multiple victories. Dan Martin—the special effects wizard behind The Human Centipede II, Host, A Field in England, to name a few—accepted awards for Best Creature FX and Best Makeup FX for Color Out of Space and Possessor, respectively. All in front of a mound of prosthetic heads! 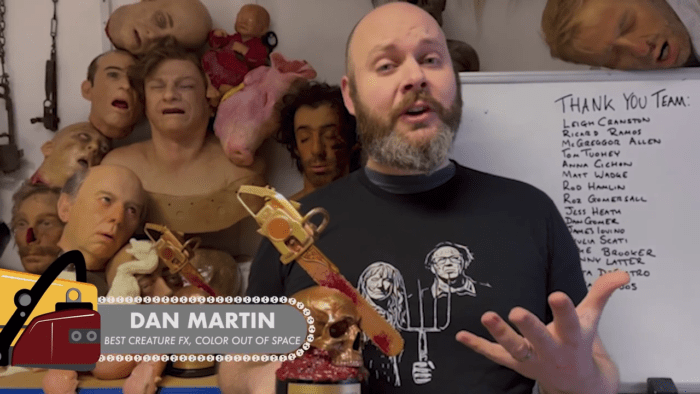 Leigh Whannell (Director of Insidious: Chapter 3, Upgrade) and his smash hit The Invisible Man were ironically showcased throughout the evening. Whannell earned awards for Best Screenplay and Best Director and in total the film was responsible for five wins, including Best Wide Release.

The film was no doubt buoyed by the fact it was one of the few films on the list to be released before the pandemic shut down theaters around the country, but that’s not to say the film isn’t worthy of all its acclaim. Just look at the awards The Invisible Man earned as they exemplify the film’s masterful blend of thrilling blockbuster (Best Wide Release), brutal slasher (Best Kill), and artistic filmmaking (Best Director). 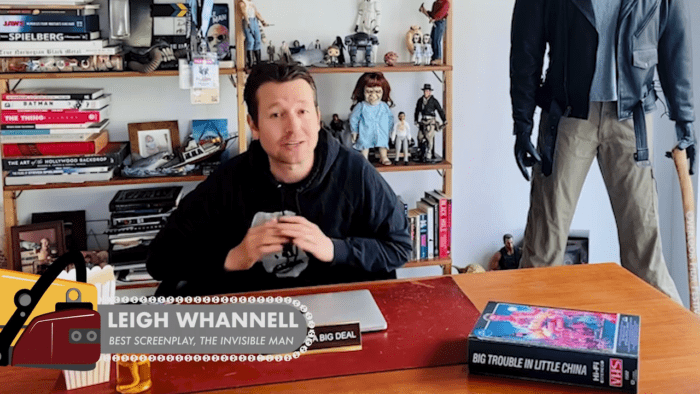 The sweep from the universal hit meant that beloved film producer Jason Blum of Blumhouse made a couple of appearances. His first appearance was to accept the reward on behalf of Elisabeth Moss and the second time to accept the Best Wide Release. It appears the quarantine has driven the horror hound a little…batty. 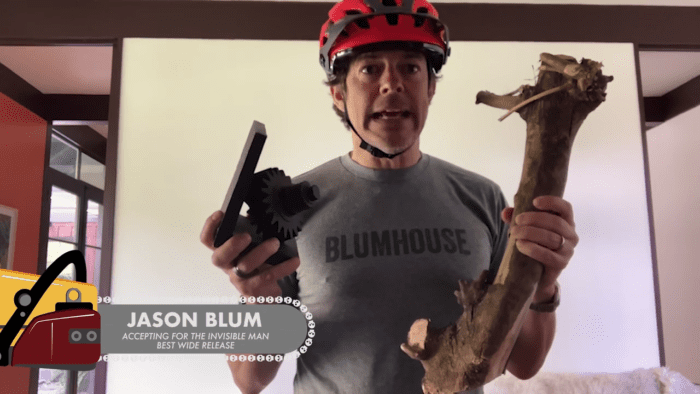 Issa López, director of the Shudder Exclusive Tigers Are Not Afraid, gave a heartfelt speech before announcing the nominees for Best International Movie. In Spanish, he said

If you are scared of subtitles, it is time to face your fears. There’s an ocean’s worth of stories out there, and it’s time to realize that we have more in common than we think we do. And at the end of the day, we all scream in the same language.

The award went to the Guatemalan film La Llorona directed by Jayro Bustamante. If this one escaped your watch list, be sure to add it right away as it is a thoughtful and well-crafted ghost story that cleverly uses the genre in stimulating ways.

Overall, the event was warm and inviting, like a scary story told amongst friends around a campfire. Though next year will likely not be inhibited by the pandemic, it’ll be a real shame not to have the cozy feel that this goofball ceremony provided. That being said, you best believe HOBS will be tuning in.

Best Series—What We Do In The Shadows