Horror stories about paranoia are rather hit or miss with me personally, mostly because I find their reliance on an unreliable narrator to be a crutch for weird things happening with no explanation. They have to be executed in a specific way to really stick the landing, which is why I was ultimately surprised by Clay McLeod Chapman’s Whisper Down the Lane. It is very much an example of what happens when you take familiar elements and execute them in an interesting, enticing way. I wound up reading over half of the book in one day, which is a lot for me, considering that the words-per-minute I can read is relatively low. It’s not perfect, but it’s an effective, absorbing horror thriller.

Before we continue, you should know that Whisper Down the Lane deals with Satanic Panic, and while it doesn’t get explicit with the child abuse that people said was committed by cults during that time, it is a major plot point. I won’t be going into great detail because the book doesn’t either, but if you’re sensitive to that type of subject matter, please continue reading at your own discretion. 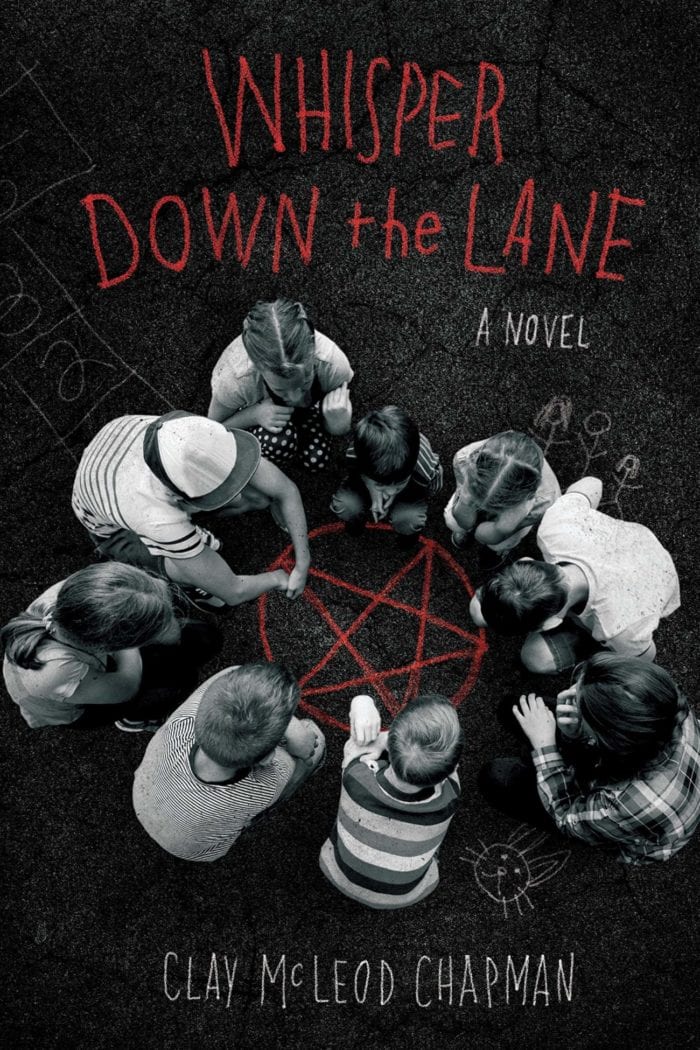 Whisper Down the Lane tells parallel stories, one that takes place in 2013 and follows Richard, an art student at a well to do private school in Danvers, and another that takes place in 1982 and follows Sean, a kindergartener who is swept up in Satanic Panic after he tells what he believes is a harmless lie. You can probably guess the relationship between Richard and Sean, and the book doesn’t really hide it, but I won’t explicitly spoil it here. Either way, Sean comes home with bruises from a school bully. His mom sees them while giving him a bath, and instead of just telling her the name of the kid that’s doing it, he instead hints that it’s his teacher that’s causing it even though he loves said teacher. From there, this simple lie picks up traction and leads to a full-on investigation of the school’s faculty, and soon he and his fellow students are telling stories of teachers drugging them, performing rituals, and sexually abusing them.

Meanwhile, in 2013, Richard finds a mutilated rabbit out in the school’s lawn, and there’s a cryptic note attached to it that says “Circle Time.” He enjoys spending time with his wife (also a teacher at the school named Tamara) and his stepson Eli, but that all goes wrong when the past seemingly starts to repeat itself and events that happened with Sean start happening to Richard. He is accused of terrible things, and soon the whole town turns against him.

It’s a pretty interesting setup, and rather than approach the subject matter from a more occult, potentially tasteless angle, Chapman instead uses Satanic Panic to tell a riff on The Crucible. The devil is in the details, as they say, and the details here feel real and plausible. Sean, as a five-year-old, has little grasp on the idea of actions and consequences, and by the time he starts having a guilty conscience about lying, everything is far beyond any one person’s control. Whether or not the teacher is actually guilty of the crimes he’s accused of doesn’t actually matter. What does matter is that parents believe he is, and soon Sean is being asked questions that lead him into answering questions that paint the teacher in a terrible light.

It’s unusually gripping, and I say that because it’s really nothing that hasn’t been done before. Sure, the approach to the subject matter is more realistic than schlocky, but there are countless stories about one seemingly small lie snowballing into something catastrophic. But here there’s also the element of the modern-day story, where Richard’s own mental state is called into question. It’s a slow, slow burn, with much of the action starting more than halfway through, but that lets Chapman paint Richard as a normal man. The reader spends the requisite time with him to make the second half feel all the more effective.

It starts at a harvest festival in the fall, which is probably my favorite sequence in the book. Not only is it atmospheric and evocative, but its events are both grounded and terrifying. Richard and Tamara lose Eli in the crowd, and Richard runs into a corn maze to find him. In the center is a stuffed scarecrow that is reminiscent of the Grey Boy, a figure that Richard starts seeing more and more. It’s a genuinely anxiety-inducing sequence, and it’s strengthened by Richard’s own fragile state; it’s the point where he begins doubting himself, and he starts getting accused of things he has no memory of.

I’ll admit I was initially worried about where the book was going. The way it’s played, you’re unsure of exactly what is happening until the last thirty pages or so, and there’s plenty of suspense and real, tangible paranoia up to that point. I’m happy to say the book doesn’t go exactly where I thought it might (I won’t tell you what I was worried about, but it’s not tough to guess), but the answers it provides still aren’t entirely satisfactory. The resolution recontextualizes the events of the book pretty well, but it still leaves a lot of questions unanswered, and an individual’s mileage may vary depending on what they want from a story like this.

Still, I found myself unusually absorbed by Whisper Down the Lane. It manages to strike a very fine balance of having unreliable narrators while still feeling grounded and relatable. Its scares are low-key, with the greater emphasis being placed on the atmosphere and fragile mental state of the characters. It also effectively captures the idea that one small lie can have catastrophic consequences in a way that feels plausible and real, which is a difficult trick to pull off. And, most of all, it doesn’t rely on the exploitation of ’80s nostalgia to tell its story effectively. Instead, it wisely uses that as a backdrop to examine something more universal and much more terrifying. It’s both a slow burn and briskly paced, and the end result is something that we’ve seen before, but rarely so well executed.